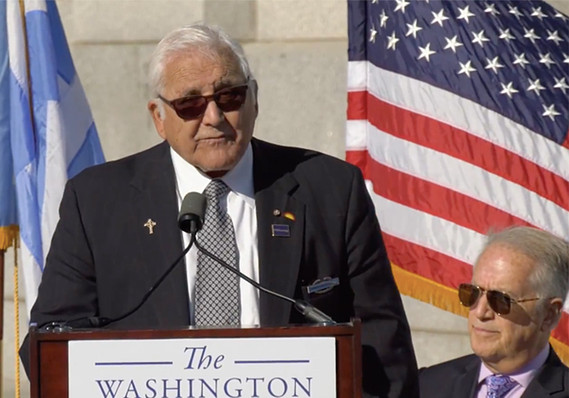 He died at the state’s Huntington Hospital during treatment. Two of his daughters and a son-in-law also contracted COVID-19, according to NBC New York. He died alone, as the family was under quarantine, his daughter Denise Bocchicchio, who was tested positive, told the TV station. She could not be immediately reached for a comment.

One of his daughters, who was in the intensive care unit, is now released and recovering at home; the other two are also recovering and quarantining at home, said Morgan Possas, his 23-year-old grand niece who resides in Florida.

Possas was born into a family of Greek immigrants in New York City during the Great Depression, and enlisted in the military at 17. After being deployed to the Philippines and fighting on several islands in the South Pacific, he found himself on a ship headed for Japan’s southern city Hiroshima, during which time Americans dropped two atomic bombs on his destination, bringing the war to an end.

After being discharged in 1946, he returned home to settle in East Northport, N.Y., and became an electrician. He later owned his own electrical contracting business, which has remained in his family for three generations.

He was recognized as a leader in the Greek-American community. In 2017, Washington Oxi Day Foundation, a D.C.-based nonprofit that gives awards to World War II veterans and modern-day heroes like journalists Maria Ressa and Jamal Khashoggi, gave him the Greatest Generation Award for having demonstrated great leadership.

“This remarkable man survived the Great Depression, combat in WWII, and during which his kindness, compassion and leadership made him a beloved member of the national Greek-American community,” Mike Manatos, the executive director of Washington Oxi Day Foundation, posted on Facebook.

Outside his active role in the social and business community, he was a generous and hardworking family man, according to his relatives. “He really made a difference in my life most recently. When my dad (Possas’ nephew) unexpectedly passed away in July of 2018, he was actually the only family member who made the quick trip down from New York to Florida,” says Morgan Possas, who called him “Uncle George.”

“It truly meant the world to me, and it just goes to show how important family was to my Uncle George,” she says, adding that he was 91 years old at the time.

When George Possas’ goddaughter, Donna Patelis, was going through chemotherapy a few years ago, he also helped her to pay her bills because she couldn’t work, Morgan Possas says.

George Possas had been married to his wife, Evelyn Lambrinon, for 64 years, until she passed away in 2016, local newspaper Huntington Now wrote. He is survived by four children and nine grandchildren.

“The most important thing his immediate family has said during this, is to not let the coronavirus define him, as he lived out a beautiful life,” Morgan says.