Home
Stocks
Rex Nutting: Audaciously, Trump is running for re-election as the Hero of the Coronavirus War
Prev Article Next Article 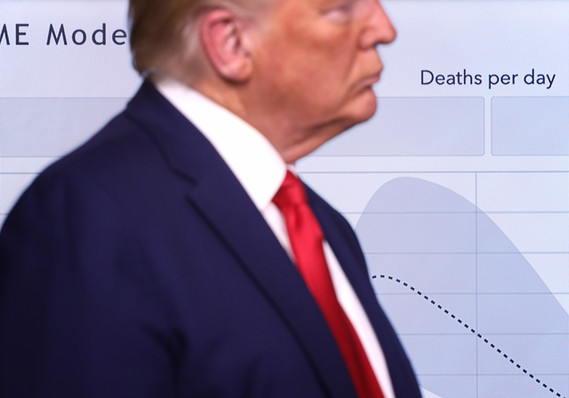 Donald Trump finally faces the prospect of massive loss of life from the coronavirus.

For Trump, perceptions are much more powerful than mere facts. If there’s one area in which he is truly skilled, it’s in creating the illusions that are so important in show biz and business and politics.

Remember in 2015 when Dilbert’s Scott Adams famously predicted Trump’s election based on his “weapons-grade” ability to hypnotize (that is, persuade) people by appealing to their imaginations?

Donald Trump is a public-relations genius, and the coronavirus may be his crowning achievement.

It’s as easy as magic. Almost anyone can learn, with enough practice, to make a coin “disappear.” A weekend birthday-party magician can make a rabbit disappear, and a good one can make an elephant disappear. David Copperfield made the Statue of Liberty disappear.

This is his election strategy. Audaciously, Trump is running for re-election as the Hero of the Coronavirus War. The crisis has barely begun, and already he’s planning the victory celebration.

Coronavirus update: All the latest developments in the coronavirus pandemic

To win re-election, Trump must persuade a sufficient number of people to forget his stunning mismanagement and politicization of the pandemic and his repeated lies and denials of the threat posed by the coronavirus, and imagine instead that it was Trump’s wise leadership that pulled the United States through its worst crisis since World War II.

Key Words: Trump on allowing Grand Princess cruise passengers to disembark: ‘I’d rather have them stay on, personally’

Election 2020: Follow the latest developments in the November election on MarketWatch

You might think this is a leap too far, even for Trump. His leadership during this crisis has been erratic, divisive and ignorant. But his strategy is working. His approval ratings are up, with some swing voters citing his “strong leadership” on the COVID-19 pandemic.

The administration knew how woefully unprepared we were for a pandemic. Officials were briefed last fall, but bad news has a funny way of never making it to this Oval Office. That’s because Trump hates inconvenient facts that contradict his imagination.

Leadership in an alternate universe

Quick action in January, when it was clear that the coronavirus would be coming to the United States, could have led to tight quarantines on all visitors from China and East Asia. A strong leader would have immediately ramped up testing for the virus; isolated the suspected carriers; and ordered a massive federally led mobilization to manufacture and distribute everything we’d need to fight a pandemic, from test kits and face masks to ventilators and hospital beds.

With a two-month head start, we might have had a chance to beat this with a minimal loss of life and minimal impacts on the economy and on the lives of our people.

A strong president would have used his bully pulpit to rally the American people, instead of calling the pandemic — or, if you prefer, criticism of his response to it — a Democratic hoax. Stronger and more consistent leadership from Washington would have given cover to governors and mayors to order locally appropriate social-distancing measures earlier, when they might have made a bigger difference.

Instead, Trump spent months denying that the threat was real. The wake-up calls for many Americans may have come from the NBA, when it suspended the rest of the basketball season on March 11, and the NCAA, when it canceled March Madness on March 12.

The Fake News Media and their partner, the Democrat Party, is doing everything within its semi-considerable power (it used to be greater!) to inflame the CoronaVirus situation, far beyond what the facts would warrant. Surgeon General, “The risk is low to the average American.”

The president may no longer be denying the threat, but he is still pointing fingers. He’s forcing medical experts as well as governors to kowtow to him. He’s blaming hospitals, doctors, other political leaders and the media for every failing. He’s even threatened the voters of Michigan with reduced federal aid. Nor is he taking steps to help Americans without health insurance get some now.

In other words, he’s displaying all the character flaws that undermine his public-relations genius: his narcissism, his nursing of petty grievances, his thirst for revenge and his disdain for experts of any sort.

Trump now sees the coronavirus as a marvelous political opportunity for himself. A month ago, he was predicting (for no good reason) that the number of cases would soon go to zero. He can’t do that anymore, so he’s gone the other way, claiming that the pandemic’s toll might have been much worse — 2.2 million deaths! — if not for his speedy and perfect response.

At Sunday’s campaign rally — I mean, daily task-force briefing — he claimed that if only 200,000 Americans die from this, then “we altogether have done a very good job.”

And that, ladies and gentlemen, is how you make a pandemic disappear.