Home
Stocks
Mark Hulbert: Your next move will play a big role in beating the market over the long term
Prev Article Next Article

You need to exercise special care during this bear market if your goal is to beat the market over the long term.

To be sure, this may not be your goal. You long ago may have decided to invest in index funds. But I know that many of you still harbor the desire, either explicitly or implicitly, to do better than that.

If so, this column is for you.

The key to achieving your goal is to follow your adviser through thick and thin—and by “thin” I mean bear markets like the one we suffered from over the last five weeks. While it’s easy to follow along when things are going well, it’s tough when the markets are plunging. Ironically, though, that’s when the majority of advisers open up a lead over buying and holding—their alpha, in other words. Take away their bear market alpha, and they’re likely to have no alpha at all.

This isn’t to say that advisers don’t lose money during bear markets. Most (but not all) do. But most of the best advisers lose less than the market itself. And that margin of outperformance turns out to be a crucial factor in their beating the market over the long term. The lesson here is to focus on relative returns (losing less than the market averages) rather than on the absolute losses themselves.

A corollary is that now is a particularly poor time to give up on your adviser or strategy.

One way of illustrating this profound point is to compare the percentage of advisers who beat a buy-and-hold in bull markets with the proportion in bear markets. The attached chart summarizes the data from my Hulbert Financial Digest tracking of investment newsletters, which began in 1980. The chart focuses on bear markets in the calendar maintained by Ned Davis Research. (I didn’t include entries in that calendar in which the Dow Jones Industrial Average DJIA, -3.38%  did not fall by 20% on a closing basis.) 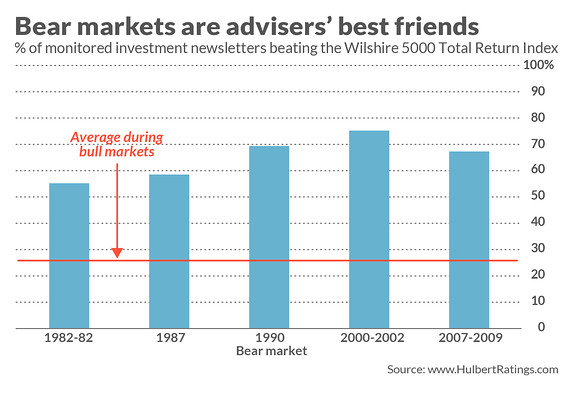 A recent analysis from Style Analytics reached similar conclusions in an analysis of equity mutual funds. As in the case of the newsletters, they found that a markedly higher percentage of them beat a buy and hold during bear markets than in bull markets. But an additional finding was also very revealing: They found that as they focused on mutual funds with better and better records, an increasing percentage of their long-term market beating return came from bear markets.

What accounts for these results? It can’t be that managers are any smarter or shrewder during bear markets than bull markets, for example.

Part of the answer is mathematical. To the extent a manager has any cash in his portfolio, that cash will be a drag when the market is rising and a source of alpha when the market is falling. A related factor: The bigger the loss during a bear market, the commensurately bigger gain that must be produced during bull markets to overcome the loss. But that requires excessive risk, and rarely in my tracking of newsletters have the riskiest newsletters been able to pull this off.

Another part of the answer is psychological: Few investors truly have the patience and discipline to stick with a strategy through a bear market—leaving outsize gains for those who do have those qualities.

To be sure, a bear market won’t resurrect the long-term performance of a terrible adviser. Patience and discipline is not a good idea when you’re following the wrong adviser. So the assumption behind my argument is that you’re following an adviser who is right and appropriate one for your financial situation. And I acknowledge that there is no way of knowing with certainty that you are.

But I do know that it’s a bad reason to get rid of an adviser for losing money during a bear market.

The bottom line: No one said it would be easy sticking to your guns when the market plunges, especially when it falls as far and as quickly as it did over the last five weeks. But what you do next plays an outsize role in whether you will beat the market over the long term.