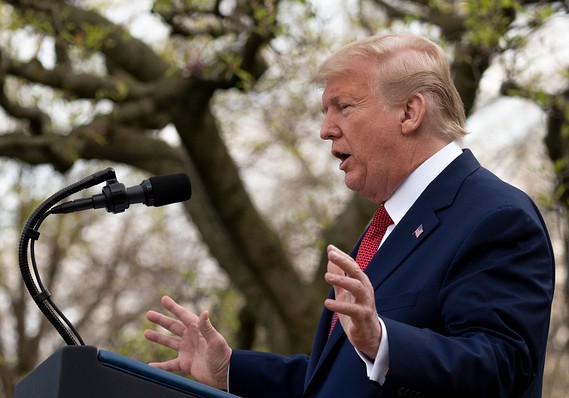 President Donald Trump on Monday said his administration expects the number of coronavirus cases to spike around Easter, a day after he extended national social-distancing guidelines through April 30.

In a nearly hourlong telephone interview on “Fox & Friends,” Trump said he expected cases to begin declining after the holiday, which falls on April 12.

On Sunday, Trump extended the voluntary national shutdown for a month. As the Associated Press wrote, the president bowed to public-health experts who told him the coronavirus pandemic could claim over 100,000 lives in the U.S., perhaps significantly more, if not enough is done to fight it.

“We think April 30 is a day where we can see some real progress,” the president told the Fox hosts.

Now read: Trump on coronavirus tests and treatments, the economy and the Canada border: his claims vs. reality.

In defending his response to the pandemic, Trump lashed out at House Speaker Nancy Pelosi, who on Sunday said he still hasn’t done enough to address the crisis.

“As the president fiddles, people are dying,” Pelosi, a California Democrat, told CNN’s “State of the Union.”

Trump called the speaker a “sick puppy” in the interview and said her statement was a “disgrace.”