Home
Stocks
5 reasons Gov. Cuomo and Dr. Fauci are America’s de facto leaders during the coronavirus pandemic
Prev Article Next Article
This post was originally published on this site 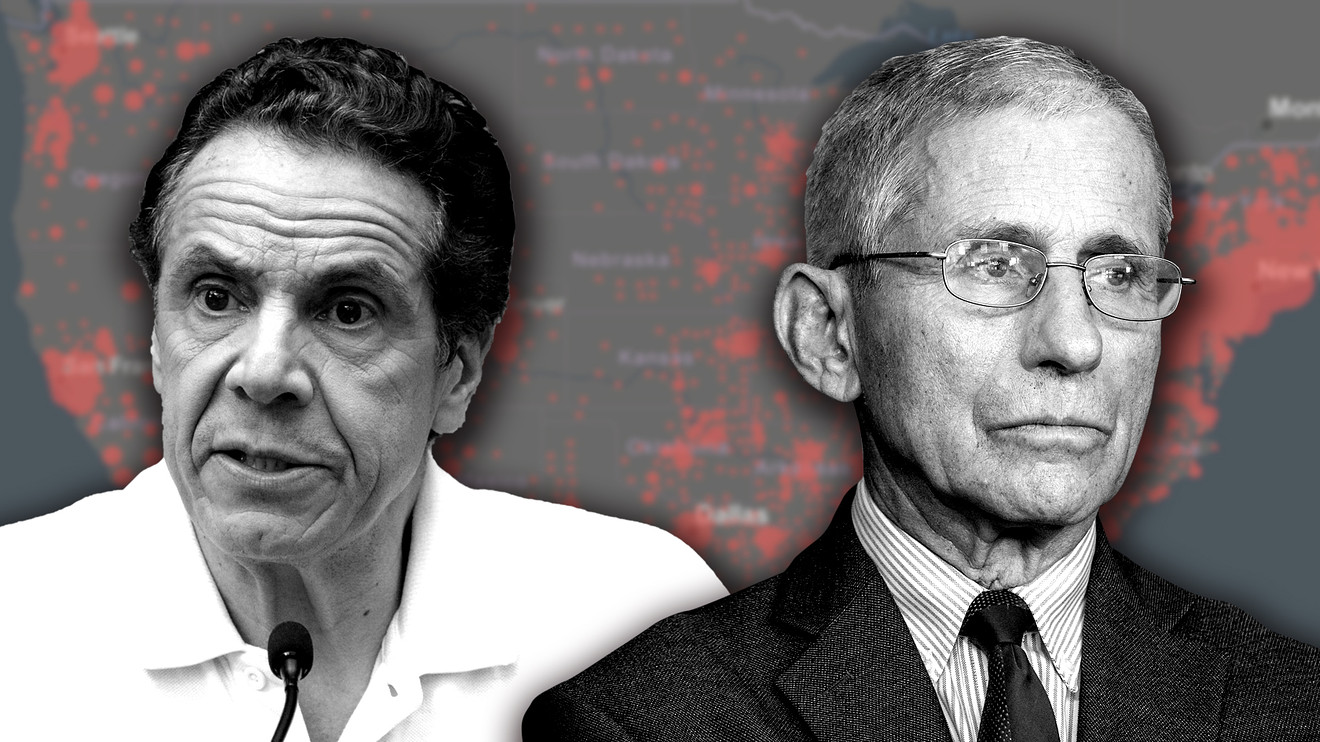 Throughout the month of March, New York Gov. Andrew Cuomo has held near-daily news conferences updating New Yorkers with dire statistics on ventilators and hospital beds. In response, #PresidentCuomo has trended on Twitter, and the governor’s updates are repeatedly hailed as “comforting,” even by users who don’t live in New York.

Meanwhile, a Twitter user in Rochester, New York, recently posted a photo of doughnuts decorated with photos of Dr. Anthony Fauci, the director of the National Institute of Allergy and Infectious Diseases who earlier in the day made what would otherwise be an improbable appearance in an Instagram Live Q&A with Golden State Warriors star Steph Curry.

For Americans gripped with fear and confusion over the rapid spread of the coronavirus, Cuomo and Fauci have emerged as unexpected emotional life rafts. For many, they’ve also become primary sources of information on the pandemic — a recent poll from Business Insider listed both men as the most trusted leaders in the U.S. when it comes to the coronavirus response. For Cuomo in particular, there’s been so much “glowing coverage” that even the coverage itself is now getting coverage. More recently, a poll from the Siena College Research Institute found that 87% of New Yorkers approved of his handling of the epidemic.

Here’s how a previously little-known infectious disease expert and a state governor who’d spent the past year battling plummeting approval ratings wound up as many Americans’ de facto leaders in the face of an unprecedented threat.

They state the facts clearly

The coronavirus has been plagued by the spread of false or confusing information — much of it coming from the White House and President Trump himself. Questionable text-message forwards with information “from a friend who’s a doctor” are being swapped back and forth, while social media networks are battling an onslaught of misinformation and disinformation.

Perhaps it’s not especially shocking, then, that two figures regularly offering up vetted, clear, and understandable information have become such lifelines in this crisis.

Fauci and Cuomo “are blunt explainers of facts,” said Joel Garfinkle, an executive coach and author of “Executive Presence: Convey Confidence and Command Respect as a Leader.” “There’s no nonsense. They’re clear with the statistics, [and giving] short, pithy statements that really grab people’s attention.”

In Cuomo’s case, daily news conferences include concise powerpoint slides that are easily screenshotted and shared on social media. And Fauci has been able to distill complex, shifting medical data into understandable statements, garnering praise from Scientific American as a “plain spoken” example of how a scientific expert should communicate with the public.

“They are clear; they provide facts,” said Kim Scott, author of the bestselling management guide “Radical Candor” and a Silicon Valley veteran who has led teams at Google, developed management strategies at Apple, and acted as a CEO coach at companies including Dropbox and Twitter. “Here’s what has been done, what the problems are, and what needs to be done.”

Clear as the data coming from Fauci and Cuomo may be, it’s also often devastating. (Earlier this month Fauci said of the government’s testing system, “It’s failing, let’s admit it.”) This hasn’t stopped Fauci from being lauded as an “American hero,” or Cuomo from turning bleak daily news briefings into appointment viewing.

“People can deal with the facts, and people have a hard time dealing with uncertainty,” Scott said. “When someone is clearly lying, it’s more stressful than the news itself.”

Similar to the experience of a patient awaiting grim medical news, Scott said, “The worst part of that experience is waiting to get an exact diagnosis and a plan. No matter how horrible the plan is, when they have it, they feel better.”

And in fact, both Fauci and Cuomo’s ongoing willingness to be the bearers of bad news — most recently, Fauci’s warning that the U.S. death toll could reach 200,000—has likely bolstered the public’s sense of comfort with them, rather than diminished it.

As a leader, “Don’t sugarcoat the truth,” said Jennifer Goldman-Wetzler, Ph.D., executive coach, and author of “Optimal Outcomes: Free Yourself From Conflict at Work, at Home, and in Life.” “When you do that, people find out, and you’ve lost trust.”

In addition to supporting their own credibility as reliable sources of information, both Fauci and Cuomo may be providing some degree of calm. “Even when the truth is terrible, we imagine that it’s even worse,” Scott said. “Having the facts is actually comforting.”

They make an emotional connection with people

Around the same time that some politicians and social media users were starting to make the argument that a higher coronavirus death rate may be a necessary sacrifice to make for the health of the economy, Cuomo got nearly 74,000 retweets and 285,000 likes on a tweet stating, “My mother is not expendable. Your mother is not expendable. We will not put a dollar figure on human life.”

Rather than staying above the fray of a widespread societal panic, statements like this have allowed Cuomo to maintain a level of emotional relatability that makes people feel seen.

“He’s tapping into certain emotions that we’re all already feeling and using those to connect with people,” Goldman-Wetzler said.

And this level of emotional identification with a leader can create a broader sense of trust in their practical handling of the situation. “Cuomo is speaking from a place that people can relate to, and feel like he gets it and he has our back” Garfinkle said. “Part of that is the ability to really connect and be with [your] audience. What’s it like to be a person receiving this information? And how do I communicate it?”

“You never get the sense that either [Cuomo or Fauci] is impervious to the human toll that this is taking on people,” Scott said.

They put politics to the side (somewhat)

After Hurricane Sandy ravaged his state in 2012, then-New Jersey Gov. Chris Christie, a Republican, reached out directly to President Obama for assistance and toured storm damage with the Democratic leader. In response, his approval ratings spiked from 56% to 77%.

In the midst of a crisis, the sense that a leader is willing to cut through red tape or put aside political protocol can be a powerful way of building credibility.

Fauci, in particular, first gained attention for his willingness to contradict and correct information coming from the White House. At the same time, he’s also thrown support behind the president on issues such as the initial European travel ban, eschewing partisanship for support of scientific facts.

Cuomo has alternately worked closely with and publicly chided the president in his efforts to bring aid to New York state, while simultaneously working to relax regulations to allow more medical workers to come into service; getting federal permission to launch testing with private labs; asking for aid from other states in exchange for help from New York in the future; and other actions that signal a willingness to work around business as usual. One result of this has been a sudden spike in discussion on social media (and from Fox News host Tucker Carlson) of a last-minute Cuomo presidential run, though experts and political operatives view this scenario as unlikely. In response to President Trump’s recent comments about an election matchup between the two of them, Cuomo said in his daily news conference on Monday that he wasn’t interested in “engaging in politics with the president” and “I’m not running for president, I was never running for president. I said from day one I’m not running for president, I’m not running for president now.”

“There’s no facade of politically minded language,” Garfinkle said. “Both Cuomo and Fauci have shown examples of standing up for what they believe in and not backing down. The distinction from a leadership standpoint is that people feel ‘They’re out there for me.’”

The importance of just showing up

Just as Christie saw a rush of popularity for his handling of Hurricane Sandy, former New York Mayor Rudy Giuliani rode a years-long wave of goodwill as “America’s Mayor” for his response to the 9/11 terrorist attacks. His Time “Person of the Year’ profile in 2001 described in grisly detail his visits to Ground Zero shortly after the attacks, at a time when other public officials were far less visible.

Even when public appearances don’t carry as clear or visible an element of physical risk, they can provide an anchoring force in a crisis.

“Cuomo in particular is just present,” Goldman-Wetzler said. “Why are we suddenly paying attention to him? Because he’s there. Every hour he’s posting on Twitter, he’s making speeches, he’s just showing up.”

In other words, even upsetting daily news conferences, to many viewers, are vastly preferable to an upsetting lack of daily press conferences. “When a leader is aware of that and shows up it’s comforting. It almost matters less what they say and what they do, it matters more that they’re there,” Ms. Goldman-Wetzler said.

It’s not surprising, then, that Fauci’s absence from a recent White House press briefing led to immediate worried headlines about his “disappearance.”

Frightened citizens who have come to depend on either Fauci or Cuomo as their sources of comfort or information, then, are likely to want their continued public presence until the crisis comes to an end. “Every step of the way, they both are telling the truth, they show up, they’re building trust with the American people,” Goldman-Wetzler said. “And when you have people’s trust, whether you tell them ‘it’s safe to go outside now’ or ‘you actually still need to stay inside,’ they believe you.”