Home
Stocks
The Margin: As coronavirus cases surge across the U.S., the internet has one word for this image of a crowded beach: Florida
Prev Article Next Article
This post was originally published on this site 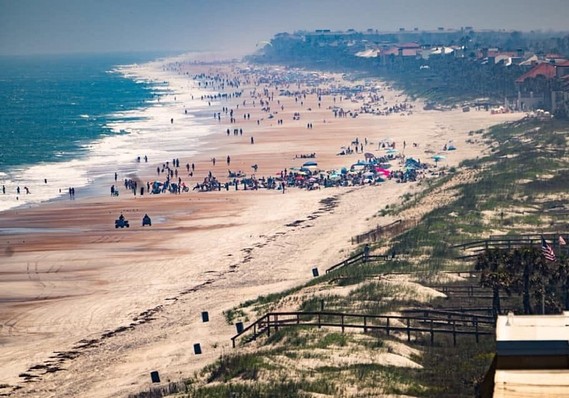 While Americans across the country grapple with the harsh reality of sickness and death, job losses and isolation, beach goers in Florida over the weekend seemed to be having a great time.

This picture is from 3pm today.

You can see exactly where Duval County ends and St. John’s County begins.

All beaches in Duval are closed, while St. John’s only blocked parking at the beach.

Gov. DeSantis needs to order a state-wide closure of all Florida beaches. pic.twitter.com/JfKzCGCPLq

As the tweet explains, the image captures the difference between two Florida counties: St. Johns, where the beaches remained open on Saturday, and Duval, which had closed the coastline.

The lack of social distancing did not go over well on social media.

“The idiot is going to cause an explosion of cases down here with his poor leadership,” Andrew Goss wrote on Twitter TWTR, -4.24%, referencing Gov. Ron DeSantis, a Republican elected in 2018.

“Florida’s lack of action is infuriating. My 65+ parents aren’t taking it seriously because “we’re not on lockdown!” an aptly named “professional social distancer” said. “My mom literally got her hair colored at a salon yesterday. Why tf are they even still open?!”

After outrage erupted in the wake of the images, St Johns County administrator Hunter Conrad announced that, as of Sunday morning, the beach is now closed.

“We have taken as many measures as possible up to this point to preserve our residents’ ability to access their beach,” he said in a statement. “Unfortunately, those visiting the beach continue to ignore CDC guidelines regarding crowd size and personal distancing.”

According to the latest tally from Johns Hopkins University, the number of COVID-19 cases in the U.S. topped 124,000 on Sunday, more than any other country. New York City and surrounding counties, with more than 50,000 cases, contribute nearly half the U.S. total.