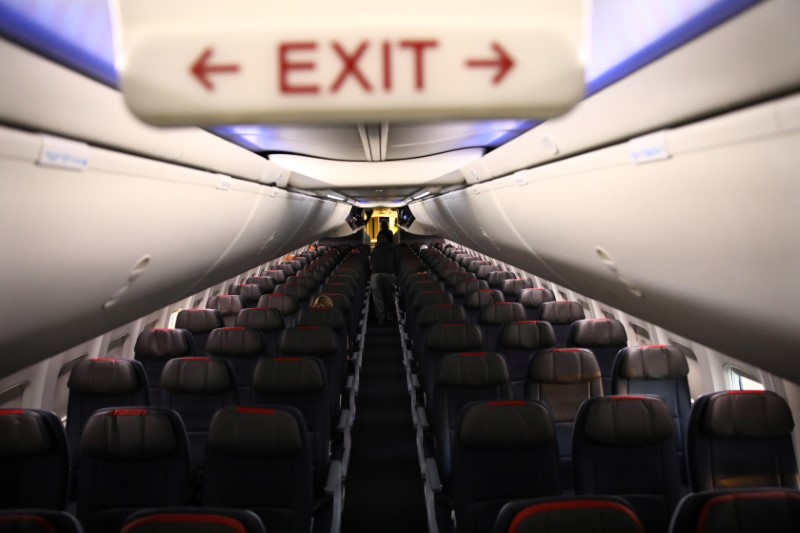 © Reuters. Rows of empty seats of an American Airline flight are seen, as coronavirus disease (COVID-19) disruption continues across the global industry, during a flight between Washington D.C. and Miami, in Washington, U.S.

By Tracy Rucinski and David Shepardson

CHICAGO/WASHINGTON (Reuters) – Shares in U.S. airlines fell sharply on Wednesday after Washington proposed a rescue package of $50 billion in loans, but no grants as the industry had requested, to help address the financial impact from the deepening coronavirus crisis.

The Trump administration’s lending proposal would require airlines to maintain a certain amount of service and limit increases in executive compensation until the loans are repaid.

But the industry says government assistance is also needed to avoid collapse, airlines are working behind the scenes to convince lawmakers to still make a significant chunk of it in grants.

Their request for aid has faced pushback from some lawmakers demanding that any government package include protections on employees and a ban on share buybacks. The top five U.S. airlines spent around $44 billion in share buybacks between 2014 and 2019, according to data compiled by Reuters, spurred in part by a 2017 tax-cut windfall.

Democratic lawmakers, including U.S. Senate Democratic leader Chuck Schumer, said that money could have been put into a rainy day fund.

Democratic Senator Chris Murphy said Wednesday that sentiment is shifting over a rescue package because “there is no straight-face justification to give no-strings-attached cash to an industry that had the chance to use massive profits and tax cuts to build a rainy day fund, but instead used the money to pad investor returns and executive pay.”

U.S. Senator Elizabeth Warren said on Twitter that “any money should come with serious long-term change to the companies – no more buybacks, a $15 minimum wage, and more.”

In their push for aid, airlines have touted the role their services will play in revamping the global economy.

“When this pandemic passes – and it will – air travel will play a major role in getting life back to normal and supporting economic recovery. We are going to need significant government help to do that,” JetBlue Airways Chief Executive Robin Hayes and President Joanna Geraghty said in a memo on Wednesday.

JetBlue (O:) said its customer cancel rate was more than 10 times the norm, forcing it to suspend more flights and review its fleet plans.

Delta on Wednesday said it was parking more than 600 jets and scaling back its flying by more than 70% until demand begins to recover, with revenues seen declining by $2 billion in March.

Delta Chief Executive Ed Bastian, who likened the steps to hitting a “pause button” on operations, said in a memo to employees he was optimistic about industry support from the White House and Congress but would continue taking “all necessary self-help measures.”

Delta shares closed lost 26% lower, while United stock was down 30% and American 25%.

“Our focus is on saving the industry and doing it in a way that is worker focused,” Sara Nelson, president of the Association of Flight Attendants union representing 20 airlines including United, told Reuters.

Meanwhile, business and industry events continued to ground to a halt.

Organizers of the British event are in a wait-and-see mode so far.