The numbers: If Americans weren’t fully aware of the coronavirus threat several weeks ago, they are waking up to it now.

A survey of confidence, known as the consumer sentiment index, fell to 95.9 in March from 101.0, according to the University of Michigan. That’s the weakest reading in five months.

The index is all but certain to fall more sharply in the months ahead. The current reading only covers the beginning of March — right before an onslaught of bad news about the coronavirus epidemic pushed the U.S. into crisis mode. 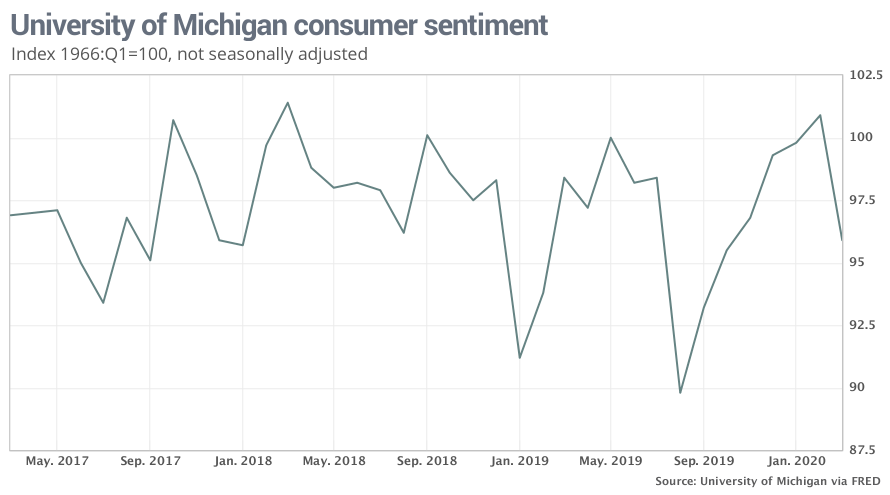 Sentiment nearly matched a post 2008 recession high in February, but that’s likely to be the high water mark for quite some time. Large chunks of the economy — pro sports, higher education, cultural institutions and the like — are shutting down to try to limit the spread of the virus.

What happened: The preliminary readings of the sentiment survey did not show the same kind of panic that proceeded the 2007-2009 Great Recession, results show, because most Americans saw the virus as a temporary event.

It may be just a temporary event, but as the events of the past few days have shown, it could result in unprecedented disruptions. The drastic makeover in how Americans work, play and live has already triggered a bear market on Wall Street and it’s going to affect virtually every aspect of people’s lives, at least for the next several months.

“The data suggest that additional declines in confidence are still likely to occur as the spread of the virus continues to accelerate,” said Jim Curtin, chief economist of the survey.

Big picture: The U.S. economy will soon slowly rapidly and probably begin to contract. Some forecasts call for gross domestic product, the official scorecard of the U.S. economy, to shrink as much as 4% in the second quarter that runs from April through June.

Read: Economy could tank 4% in second quarter as nation shuts down to fight coronavirus

The big unknown is how quickly the U.S. gets a handle on the epidemic, limits the spread of the disease and allows the economy to start getting back to normal. The answers might not be available for a while.

Some economists say the U.S. is headed toward a recession, but others think the economy can muddle through and rebound later in the year.

What they are saying? “If past experience is any guide we should expect [sentiment] to fall by a further 15 to 25 points over the next couple of months,” said chief economist Ian Shepherdson of Pantheon Economics. “Past experience, however, includes nothing like the coronavirus outbreak.”

Market reaction: The Dow Jones Industrial Average DJIA, +2.21%  surged as much as 1,000 points in early Friday trades, recovering some of the lost ground from the prior day before. Yet the Dow has surrendered around 7,000 points in the past few weeks and entered a bear market. The situation is unlikely to get better in the next several weeks.