Home
Stocks
Market Extra: The 10-year Treasury note yield just broke below 1%. Here’s how it happened
Prev Article Next Article
This post was originally published on this site

The U.S. bond-market’s benchmark yield plunged below 1% on Tuesday, a possibility that few analysts and investors contemplated at the beginning of the year.

Investors have attributed the slide in U.S. Treasury yields to a combination of factors including slower global economic growth, the attraction of a positive return when negative-yielding debt is the alternative in Europe and Japan abroad, and the absence of any inflation threat.

But in the end, the spark for the furious rally in Treasurys on Tuesday came from a less abstract source: a surprise 50 basis point interest rate cut from the Federal Reserve to counteract worries that the spread of the COVID-19 epidemic would deliver a painful blow to consumer and market confidence.

“The rate cut is important for what it signals – that policymakers are here to support – and for sentiment,” said Solita Marcelli, deputy chief investment officer for the Americas at UBS Global Wealth Management, in e-mailed comments. “Improving sentiment buys time for fiscal authorities to figure out the response to the economic consequences of the virus.”

Wall Street is grappling with the enormous uncertainty about economic growth resulting from the coronavirus as it continues to spread beyond China to the U.S. and Europe. Economists have struggled to forecast its overall impact on global growth, with debate raging over whether the virus presented a shock to demand or supply, or even both.

The direction of the benchmark maturity’s yield is important for economists, households and central bankers as it serves as a benchmark for all kinds of loans including long-term mortgages. The long-dated bond also serves as a broader barometer of how easy it is to borrow money, and an indication of how investors perceive the U.S. economy’s prospects. 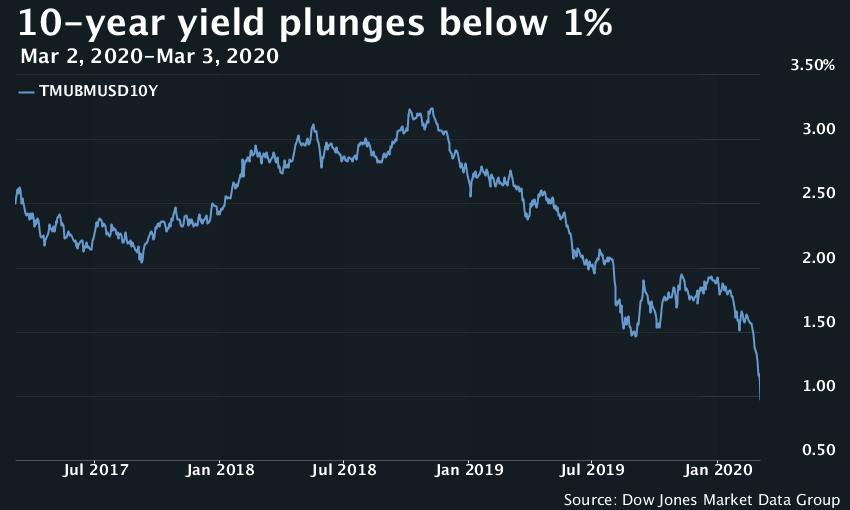 Analysts say the Fed’s move to ease monetary policy ahead of its scheduled policy meeting in two weeks suggests the central bank wanted to demonstrate its willingness to act, in line with research by Fed officials suggesting that early and aggressive rate cuts are more effective when interest rates are near zero.

“If you’re going to do it, you better over-deliver,” said Maura Murphy, a portfolio manager at Loomis Sayles, in an interview.

But the sharp selloff in stocks on Tuesday indicated few investors saw the rate cuts as a confidence-bolstering move, amid questions about the benefits of looser monetary policy when confronted with the supply chain disruptions caused by the coronavirus.

See: Why stocks are tumbling despite the Fed’s surprise rate cut

The resulting bid for safe haven assets helped to accelerate the fall in the whole U.S. Treasury yield curve on Tuesday.

“Even though interest rates are already low, there is room for them to fall further,” wrote Kathy Jones, chief fixed-income strategist at Schwab Center for Financial Research, in a Tuesday note. “U.S. 10-year Treasury yields are still significantly above those in Europe and Japan, which implies that rates could converge longer-term.”

Bond-market bears say there isn’t much economic data to support the case for yields to stay at current depressed levels, but the prevailing emotion of fear has overshadowed any impulse towards higher yields.

Read: What’s next for the 10-year Treasury? Wall Street has no more idea than you do

Traders looking to place short positions and bet against a further bond-market rally are confronted with sharp inflows into haven assets, much of its funneled into government paper. The U.S. dollar’s reserve currency status and the immense depth of the U.S. bond market have made it the investment of choice for those seeking an anchor against a broader selloff in risk assets.

“There’s no clarity on how the coronavirus is going to go. Would people dump Treasurys at these levels? I very much doubt it,” Eoin Walsh, a portfolio manager at TwentyFour Asset Management, told MarketWatch.