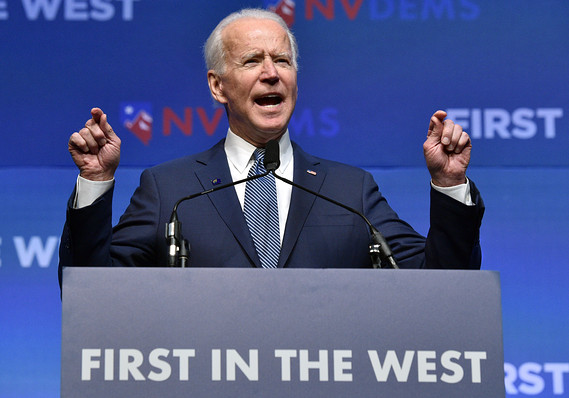 Joe Biden speaks during the Nevada Democrats’ “First in the West” event at the Bellagio Resort & Casino in Las Vegas last November. The state’s caucuses “can’t come fast enough” for the former vice president, according to one analyst.

Democrats’ presidential primary race is turning to Nevada and South Carolina, two states whose diverse populations could help shake up the contest after Bernie Sanders captured New Hampshire on Tuesday.

Former Vice President Joe Biden is banking on strong showings in both states, and in the states that vote in the so-called Super Tuesday contests on March 3. Nevada’s caucuses are Feb. 22 and South Carolina Democrats have their primary Feb. 29.

Biden — who has lost the national front-runner spot to Sanders — is leading in polls of both states, according to averages from RealClearPolitics. Pressure has intensified on him after his fifth-place finish in New Hampshire.

Now see: ‘The real winner is Klobuchar’ — reaction to the surging candidate and more after Sanders edges Buttigieg in New Hampshire

Top contenders from the still-broad Democratic field will debate in Las Vegas on Feb. 19. Former New York Mayor Mike Bloomberg could soon qualify to join them, bringing to the stage a fresh face whose generous ad spending has helped him earn third place in national polling.

“If Biden, Buttigieg, and Klobuchar completely fizzle out by Super Tuesday, Bloomberg may be in a position to consolidate support. But Bloomberg isn’t in that position now, and early voting has or will soon begin in many of these states,” said analysts at Beacon Policy Advisers.

Buttigieg and Klobuchar have struggled with African-American voters, something that may hamstring them in the next round of contests.

Klobuchar reportedly plans to expand her staff in the Super Tuesday states following her third-place showing in New Hampshire. Buttigieg, meanwhile, is assuring Nevada’s powerful Culinary Union that he supports their health-care plan, seeking to capitalize on the union’s reservations about Sanders’ “Medicare for All” single-payer system. The Culinary Union has told its 60,000 members that their plans would be put at risk by Sanders’s proposal, the Wall Street Journal reported.

Health care is a top issue in the election as Democrats battle it out in early states. On Wednesday, shares of insurers including UnitedHealth Group Inc. UNH, +4.24% surged in the wake of Sanders’ New Hampshire victory, on the grounds it was seen as bolstering President Donald Trump’s reelection chances.