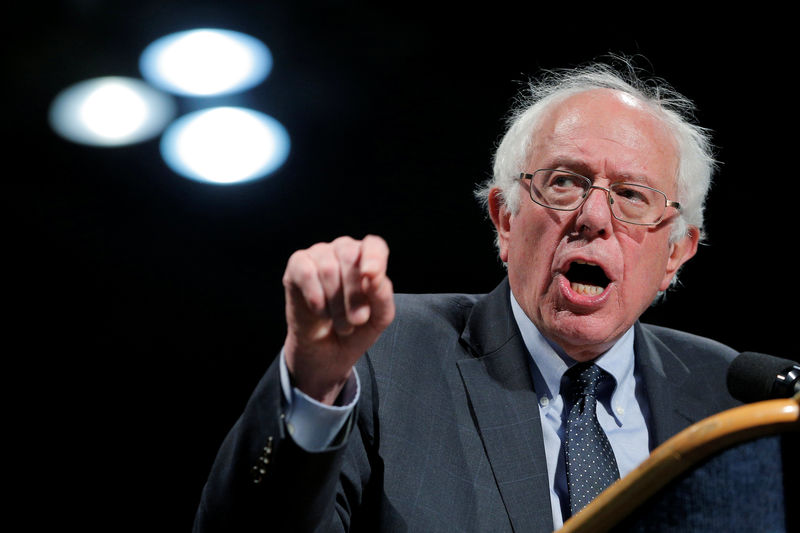 (Bloomberg) — Wall Street has little use for Bernie Sanders. The Vermont Senator and self-described democratic socialist boasts about his antagonistic relationship with the moneyed class and plans to tax the rich and hamstring banks.

Yet the market’s been calm as he climbed in the national polls, notching a win in the New Hampshire primary — the S&P 500 closed at an all-time high Tuesday. The reaction was different last fall, when Elizabeth Warren, another Wall Street foe, surged. Ask around now, and investors will say Sanders’s rise is different. He has no chance to beat Donald Trump in November, so why fret over him?

Another cohort on the Street is taking a different view, mindful that predicting political races, let alone the winner’s impact on stock prices, is a perilous exercise that strategists have shown little ability to get right. Recall the epic misjudgment on Trump just four years ago and prudence requires an assessment of how a Sanders administration might reshape markets. While few in the industry would cheer his victory, some are now arguing that at least some sectors could thrive.

“There are no parts of the market that would welcome Bernie Sanders, but maybe there should be,” said Kristina Hooper, Invesco’s chief global market strategist in New York.

To find a silver lining, investors have to look beyond the obvious economic criticisms leveled at Sanders, Hooper said. Chief among them is his Medicare for All plan that would upend a key pillar of the American economy, with rough implications for banks and insurers. But there would be winners, too, Hooper points out. The broader health-care sector, including hospital administrators and medical-devices makers could see gains.

Read more: What Markets Get Right (and Wrong) About Campaigns: QuickTake

Ed Al-Hussainy at Columbia Threadneedle also focused on the brighter side of Sanders’s plan. He thinks retooling the market to free employers from having to provide health insurance could boost wages and household income that have stagnated even as the job market tightened.

“One of the reasons wages remain relatively depressed is because productivity has been weak, but also because health-care costs have gone up,” said Al-Hussainy, a senior interest rates and currency analyst. “If some of that burden shifts to the government, wage growth should pick up.”

A Sanders win would do more than reshape health-care, especially if his proposals lead to a predicted bulge in the federal deficit. The long-term effects of that can be debated, but the immediate impact would be a stimulus for the economy that would buoy pretax corporate profits, according to Naufal Sanaullah, chief macro strategist at Eia Alpha Partners.

“Deficit expansion in general feeds through to other sectors of the economy,” he argued last week on Bloomberg TV. Universal health-care with an attendant reduction in individual premiums can put more money in the pockets of the lowest earners with a bigger propensity to spend, translating to stronger demand for goods and services, he said.

Read more: Bernie Has a Fan Club on Wall Street That Frets Over Inequality

For now, much of Wall Street views such logic with consternation. But the evidence is scant a president’s political leanings do much to sway stocks. Variations in equity performance when a Democrat is in the White House are almost negligible when compared with Republicans, according to research from Vanguard that was published before the 2016 election.

That won’t stop investors from assigning correlation, though, and reactions to Sanders’s policies skew to the negative because, if implemented, the immediate effects would shake up the status quo. The longer-term impact might surprise investors, Al-Hussainy says. On the rates side, he says Columbia Threadneedle is digging into how cutting health-care costs could affect the path of inflation, given that they’re among the biggest contributors to increases in the consumer prices index.

“If there is wholesale reform of the health-care system or the market gets a whiff of that, it could actually be disinflationary,” he said.

And that would keep the Federal Reserve firmly on the sidelines, pinning interest rates at historical lows that have been a boon to equity investors. An easy policy stance for years to come would depress market volatility and yields — in contrast to expectations for a spike in rates caused by deficit spending.

Sanders’s advisers favor modern monetary theory, which argues countries that issue debt in their own currency can borrow as much as they like at low interest rates until inflation poses a problem. That could lead to an infrastructure bill to remake the nation’s crumbling bridges and roadways, or a version of the Green New Deal to rewire energy infrastructure. Both programs would ostensibly be financed by cheap government borrowing.

The Committee for a Responsible Federal Budget estimated Sanders’s program could add a whopping $13.4 trillion to the budget gap over the next decade — more than double the impact of rival Elizabeth Warren’s plan. President Trump’s proposal, released Monday with no provisions for additional health-care spending but a line item for a Space Force, would push the gap to $1.2 trillion.

For now, it’s the threat of runaway debt and a reshaping of the American social fabric that has Wall Street on edge over Sanders. Some investors take succor from polls showing that Trump fares better against Sanders than he does against other Democratic front-runners. But his rise into real contention for the White House will keep investors scouring for any upside, no matter how difficult it is to unearth.

(Disclaimer: Michael Bloomberg is seeking the Democratic presidential nomination. He is the founder and majority owner of Bloomberg LP, the parent company of Bloomberg News).