Home
Stocks
Mark Hulbert: Holding on to a job after age 50 isn’t always easy
Prev Article Next Article
This post was originally published on this site

You have 15 or fewer years until retirement, you have a sound retirement financial plan that is adequately funded, and you’re counting down the years.

And then, out of the blue, you’re let go. Your retirement financial plan becomes suddenly irrelevant, since it had assumed several more years of peak earnings, along with commensurately larger contributions to your 401(k). Your projected Social Security benefits had also been predicated on those peak earnings.

How likely is this nightmarish scenario? A new study offers some answers.

The study was jointly conducted by ProPublica and the Urban Institute, entitled “How Secure Is Employment at Older Ages?” The authors analyzed data obtained from the Health and Retirement Study, a survey that has been periodically conducted for many years by the Institute for Social Research at the University of Michigan with primary funding from the National Institutes of Health.

The researchers at ProPublica and the Urban Institute focused on workers in the U.S. who, beginning in 1992 or later, became 51 years old. By tracking their experiences until the age of 65, the researchers were able to measure what happens to the average worker before reaching traditional retirement age. Believe it or not, as you can see from the accompanying chart, they found that more than half of workers “experience an employer-related involuntary job separation after age 50 that substantially reduces earnings for years or leads to long-term unemployment.” 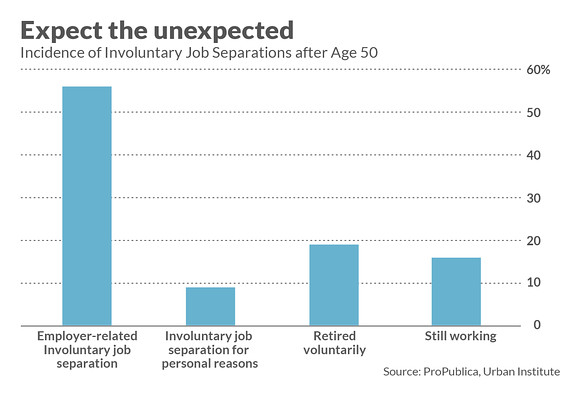 Note carefully that the disruptions the researchers focused on weren’t just insignificant leaves of absence or demotions. Instead, they only counted “job separations that were followed by at least six consecutive months of non-employment or that led to at least a 50 percent decline in weekly earnings for at least two years.”

Those are serious disruptions.

Only 16% remained in the researchers’ “still working” category at age 65.

How should you react to these statistics?

First, you should “expect the unexpected.” As the poet Robert Burns reminds us, “the best laid plans of mice and men often go awry.”

Not only should you prepare for the possibility of being laid off in the 15 years before retirement, you should outright expect it and plan accordingly.

To be sure, everyone’s situation is different. A university professor with tenure has a higher probability of working at full pay until retirement than an adjunct professor at that same institution, for example. You should work with your financial planner to make a reasonable guess as to the probability of disruptions in the 15 years before your retirement. When doing so, know that the perfect is the enemy of the good; don’t avoid making an adjustment just because it’s impossible to measure the likelihood of disruption.

These adjustments probably mean that, while you’re still working, you should be contributing more to your retirement. That may be a stretch, but a stretch is infinitely easier than the cuts you would need to make if you were unexpectedly laid off. And if you are in that minority of workers who do make it to age 65 while being employed at or close to full pay, you will have that much more in your portfolio to live on in your retirement.

Revise your financial plan immediately if you are laid off

If you are laid off, then you need to take action right away. Don’t let hope triumph over experience and lead you to think you will quickly find another job that pays as much.

On the contrary, you should assume you will not. The AARP reports that, after being laid off, “90 percent never earn as much again.”

This in turn means that your retirement portfolio will have greater demands on it than previously assumed, both the yearly amount it will be asked to generate and the numbers of years it will be needed. The sooner you make adjustments the less painful those adjustments will be.

One such adjustment might very well be to work longer, even if you will be paid less than you were at your previous job. Retire at a later age, in other words. This reduces the lifetime withdrawals from your retirement portfolio, thus enabling it to last longer, and it increases the size of your Social Security benefit.

This discussion really is part of a much broader topic: shocks that sabotage your retirement financial plan. Some of these possible shocks have been widely analyzed, such as the impact of a bear market on your retirement portfolio, or unexpected huge expenses such as unreimbursed medical bills or long-term nursing care. But other possible shocks have received less attention, and losing your job in the decade before retirement is one of them.

In fact, keeping your high-paying job in those years leading up to retirement is probably more important than some of the other shocks that have received so much attention. An article in which ProPublica and the Urban Institute summarized its new study quoted Anne Colamosca, co-author of “The Great 401(k) Hoax”:

“Having a stable job with good wages is more important to most people than what’s in their 401(k). Getting to the point where you can collect Social Security and Medicare can be every bit as hard as trying to live on the benefits once you start getting them.”