Home
Stocks
Howard Gold's No-Nonsense Investing: Trump is winning, and Wall Street is cheering
Prev Article Next Article
This post was originally published on this site 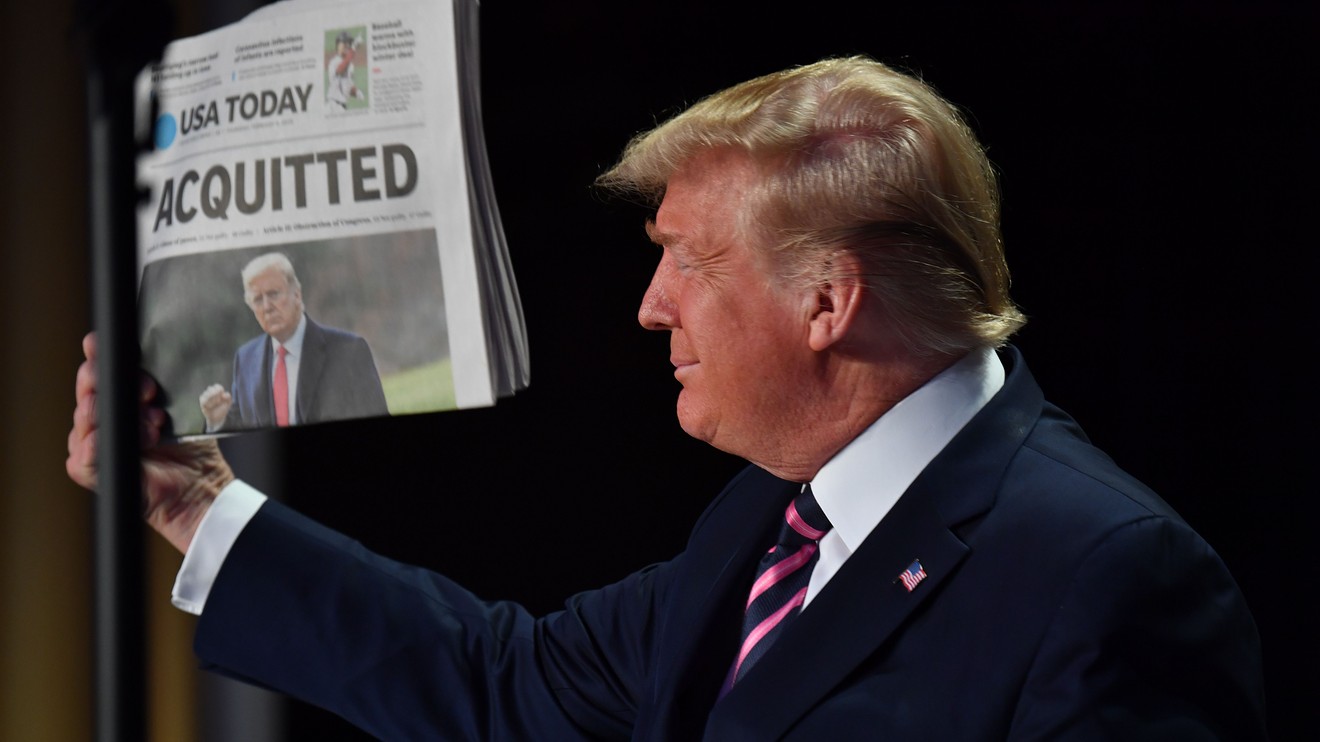 Readers of this column know I’m no fan of President Donald J. Trump. But it looks increasingly likely he’s going to get re-elected, and Wall Street is responding by pushing the S&P 500 SPX, +0.39%   and Nasdaq Composite COMP, +0.69%  indexes to all-time highs, while the Dow Jones Industrial Average DJIA, +0.39%  isn’t far behind.

That comes as the coronavirus has driven Chinese and emerging market stocks down, and when forecasters have cut their projections for global GDP growth. Also, there’s a slowdown in manufacturing and the industrial economy, critical to key swing states like Michigan, Wisconsin, and Pennsylvania, although so far few economists expect a U.S. recession in 2020.

But what counts in a presidential election year is how people feel about the economy, and that’s going all Trump’s way. His policies didn’t actually create the good economy; they’ve helped a bit, but GDP growth under Trump is about the same as it was under President Barack Obama, while job growth is weaker.

Still, voters blame presidents when the economy is bad and reward them when it’s good. Life is unfair.

Meanwhile, the fiasco of Monday’s Iowa caucuses was a disaster for the Democratic Party, whose principal candidates look like a collection of has-beens, wannabes, and never-weres.

While Democrats say Trump poses an existential threat to the Republic and even impeached him because of it (but failed to get him removed from office), their presidential field Is the weakest the party has mounted since the Seven Dwarfs of 1988. And remember, the nominee that year was Massachusetts Gov. Michael Dukakis, who lost to Vice President George H.W. Bush.

Wall Street, which four years ago overwhelmingly backed Hillary Clinton, quickly realized that a Trump administration would make them gobs of money and started buying with both fists from election night on. They know what they’re getting with Trump — or, more likely, what they’re not getting from socialist Sen. Bernie Sanders or finger-wagging Sen. Elizabeth Warren — and that’s all they need to know to keep buying.

U.S. stocks have outperformed the rest of the world even as Federal Reserve policy hasn’t changed and neither have earnings prospects. But Trump’s election prospects have, and that’s driven share prices higher.

The rally also has created an all-time high number of IRA and 401k millionaires, and, along with rising housing prices, lifted U.S. household net worth to a record $113.8 trillion in last year’s third quarter, according to the Fed.

That, and a half-century low unemployment rate of 3.5%, has elevated Americans’ confidence in the economy to 20-year highs.

A Gallup poll released Wednesday said Americans’ views of their personal financial situation “are now at or near record highs.” Some 59% say they’re better off financially than they were a year ago, topping even the number who said that in 1999, and 74% think they’ll be better off financially a year from now, the highest percentage since Gallup starting asking that question in 1977.

Not coincidentally, the same polling firm found Trump has an approval rating of 49%, the highest of his presidency.

This is good for many Americans, but bad news for Democrats.

In a famous 1980 debate with President Jimmy Carter, Republican candidate Ronald Reagan asked, “Are you better off today than you were four years ago?” He won that election, of course, and the phrase is enshrined in the lexicon of political wisdom. According to this poll, at least, the answer today would be a resounding “yes.”

Meanwhile, Democrats are scrambling to find a winning candidate.

Former Vice President Joe Biden is 77 and has struggled to broaden his support. Sanders, 78, just suffered a heart attack, accomplished virtually nothing in nearly three decades in Congress, and has radical ideas that would cost a fortune. Warren has faded badly, hoisted by her own Medicare for All petard. And Pete Buttigieg, the 37-year-old former mayor of South Bend, Ind., has no experience in even statewide office. (Former New York Mayor Michael Bloomberg, a multibillionaire, is waiting in the wings.)

That’s why James Carville, who knows a lot more about politics than I do, says he’s “scared to death.” The worst news in Iowa, he noted, was the lackluster turnout in a year Democratic voter are supposed to be energized. (Ratings on the president’s State of the Union address were also down 20% from last year.)

Carville says he is “not very impressed” with the presidential field and urged Democrats to “wake up and make sure that we talk about things that are relevant to people.” Carville, of course, coined the phrase, “It’s the economy, stupid” during Bill Clinton’s winning presidential campaign.

I’m doing pretty well and my IRA balances are higher, too, but I care more about protecting the separation of powers and rule of law. I’ve watched Donald Trump for my entire journalism career, and let’s just say I have a different view of his character than his hardcore supporters do. Their mystifying adulation reminds me of how people regard the Great Leader in totalitarian countries rather than an elected president of our constitutional republic — more like the way the Chinese worshipped Mao Zedong than the reverence some Americans have for Reagan or JFK.

But most people vote by their pocketbooks and right now, deserve it or not, voters look inclined to give this devil his due.