Home
Market
Tesla races past $100 billion in market valuation
Prev Article Next Article
This post was originally published on this sitehttps://i-invdn-com.akamaized.net/trkd-images/LYNXMPEG0L1O2_L.jpg 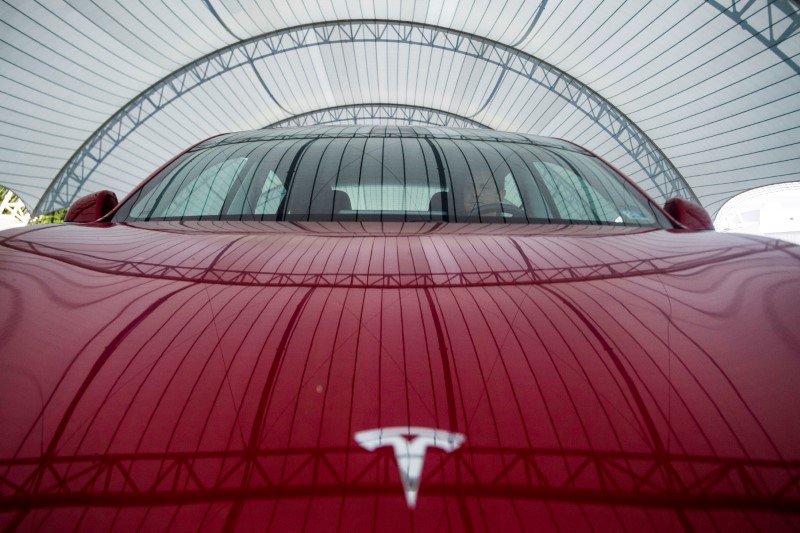 (Reuters) – Tesla (NASDAQ:) Inc on Wednesday became the first publicly listed U.S. carmaker to cross $100 billion in market valuation, in a stunning rally that has seen its stock more than double in the past three months.

Shares of the company, which is already valued more than Ford Motor (NYSE:) Co and General Motors Co (NYSE:) combined, were up 4.8% at $573.20 in early trading.

The milestone comes less than a month after Tesla’s stock crossed $420, the price at which Chief Executive Officer Elon Musk had tweeted he would take the electric-car maker private.

Musk tweeted he had “funding secured” to take the company private in August 2018, when its shares were trading in the mid-$330s, only to later give up under investor pressure and regulatory concerns.

The $100 billion valuation needs to stay for both a one-month and six-month average in order to trigger the vesting of the first of 12 tranches of options granted to Musk to buy Tesla stock.

The recent rally in Tesla’s shares was fueled by a rare quarterly profit in October, news of production ramp-up in its China factory and better-than-expected annual car deliveries.

In another bullish report, brokerage Wedbush said on Wednesday that robust demand in China and Europe alongside “aggressive” trajectory of Gigafactory 3 production will boost fourth-quarter earnings.

Tesla is set to report its earnings on Jan. 29 after markets close.