Home
Market
Exclusive: 'I'm happy he did it' – in Beirut, wife of fugitive Ghosn slams Japanese justice
Prev Article Next Article
This post was originally published on this sitehttps://i-invdn-com.akamaized.net/trkd-images/LYNXMPEG0D1NC_L.jpg 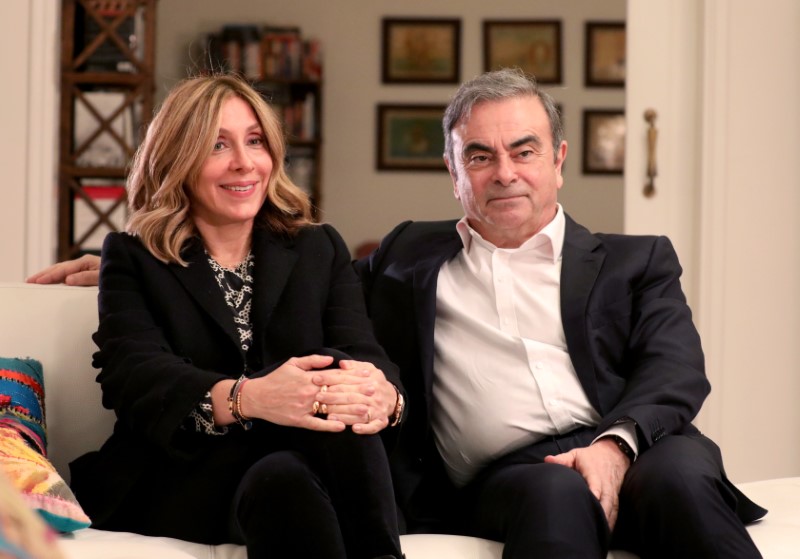 © Reuters. Former Nissan chairman Carlos Ghosn and his wife Carole Ghosn talk during an interview with Reuters in Beirut

By Alessandra Galloni and Samia Nakhoul

BEIRUT (Reuters) – Carlos and Carole Ghosn, the former first couple of carmaker Nissan, are united again in Beirut. They hold hands in the street and whisper together in a mix of Arabic and French. They kiss.

But the pair’s most visceral display of unity comes when they talk about Carlos Ghosn’s former home.

“I’m done with Japan,” said Carole Ghosn in an interview with her husband in a private house in Beirut.

Two weeks ago, Carlos Ghosn made a dramatic escape from house arrest in Japan, where he was awaiting trial on charges of under-reporting earnings, breach of trust and misappropriation of company funds. He denies all charges.

Shortly after Ghosn appeared in Beirut, Japanese authorities issued an arrest warrant for Carole on suspicion of alleged perjury related to the misappropriation charge against her husband.

“What they’re accusing me of is a bit of a joke,” said the 54-year-old Lebanese-American national, who spent many years as a fashion designer in New York and whose children live in the U.S. city.

“I testified for hours and they told me you are free to go, and now, nine months later… this comes up. They are vindictive. This has nothing to do with the law.”

Carlos Ghosn was even more adamant. “I spent 18 years in Japan; I never suspected this brutality, this lack of fairness, this lack of empathy.”

Tokyo prosecutors have said his allegations of a conspiracy are false and that he has failed to justify his acts.

The plan to flee to his childhood home of Lebanon developed quickly with a small group of people, a “reasonable price” and utter secrecy, he said.

“The first rule if you want to do something like is that no member of your family should be aware because they become very anxious,” he added.

Asked whether she would have dissuaded him to escape, Carole Ghosn blurted: “Yes!”

But then she paused, looked at her husband and added: “No. I mean, actually, let me rephrase. If you told me this at the beginning, I would have said No, of course not. You’re going to fight this and prove your innocence… But then, with time, we saw how the prosecutors were behaving… I said ‘Oh my God my husband is never going to get a fair trial’ and I was desperate.”

Japan’s justice minister has said Ghosn’s escape from his trial could constitute a crime.

Beirut has no extradition agreement with Japan and Ghosn’s legal team is pushing for him to stand trial in Lebanon. But Ghosn said last week that he does not want his own case to hurt relations between Lebanon, which is currently in the throes of an economic crisis, and the world’s third-largest economy.

The Ghosns have been attempting to focus the narrative on the question of human rights — and what they say is the inhumane way that Ghosn was treated after his arrest in late 2018. Ghosn says he was held in isolation, given only limited access to his lawyers and – his biggest complaint – prevented from speaking to his wife. The couple had been married for two years — second unions for both — when Ghosn was first arrested. He says they spoke for only two hours in nine months.

During his arrest, Carole Ghosn said she sought the support of Human Rights Watch, hired a high-profile human rights lawyer in Paris, and appealed directly to President Donald Trump and French President Emmanuel Macron to help her husband’s case.

Carlos Ghosn said he was determined up until late last year to stay in Japan and see through the investigation and his trial. On Christmas Day, he said, he realized the legal cases could last five years and decided to bolt.

The Ghosns said their life in Beirut consists of working with their legal team and spending evenings with friends.

Both have their regrets – including, for Carole Ghosn, throwing a lavish party at the 17th century palace in Versailles, France, for her 50th birthday. The party has become part of a separate investigation in France to establish if the venue was obtained improperly by the Ghosns (which both deny), and has also prompted criticism of the couple as leading an extravagant lifestyle.

“It was a beautiful event, and now it has turned out to be a big disaster,” said Carole Ghosn. “Now, I look at it, it’s unfortunate – I wish we never did it.”

Both said they would be happy to stay in Lebanon, for the rest of their lives, if that was necessary.

As for returning to Japan?