Home
Stocks
Rex Nutting: The people of the world don’t trust Trump because he doesn’t trust them
Prev Article Next Article
This post was originally published on this site

Donald Trump is one of those rare unifying leaders. All around the world — from Russia and the U.K. to Australia and Japan — most people don’t trust him to do the right thing.

And that was before his impulsive acceleration toward another unwinnable and counterproductive war in the Middle East.

Lack of confidence in Trump is a big problem, not just for Trump, but for Americans and the rest of humanity. None of our pressing problems can be solved without cooperation, diplomacy and the rule of law. America cannot go it alone in this world, as much as the nationalists would like to try.

The latest Pew Research Center poll of global attitudes toward the United States and its president shows a wide disconnect between the mostly favorable (but softening) views that the outside world has about America and the mostly negative views that residents of major foreign nations have of Trump. 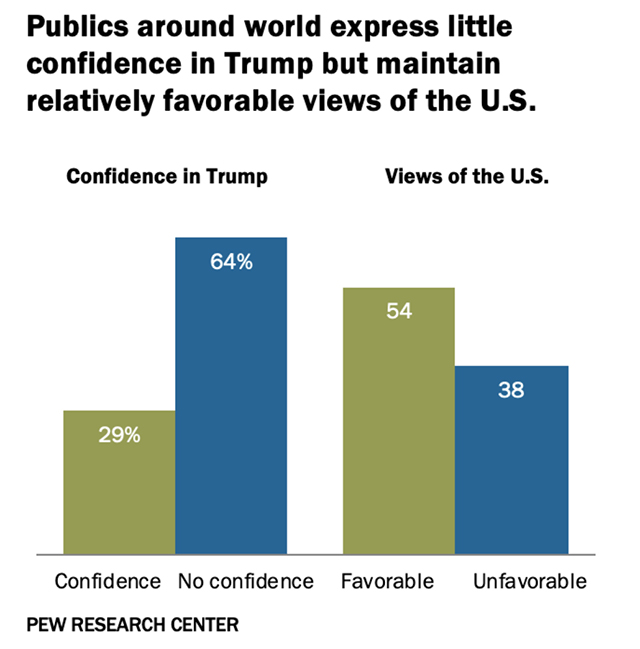 Foreigners mostly have a favorable view of the U.S., but they don’t trust President Trump to do the right thing.

Within the 32 countries surveyed by Pew, a median of 64% say they don’t have confidence that Trump will do the right thing compared with 29% who say they do.

In six countries — Israel, India, Philippines, Poland, Nigeria and Kenya — a majority of the people do trust Trump, but in every one of those countries, even in Israel, President Barack Obama received as high or higher levels of confidence at some point during his time in office.

Support for Trump has increased among supporters of right-wing, nationalist and authoritarian political movements, especially in Europe. But support for Trump has faded in other proto-fascist states such as Russia, Turkey and Brazil. And even though the U.K.’s vote for Brexit appears to be very Trumpian on the surface, most people in the U.K. have little faith in Trump.

The broad results mirror the findings of countless domestic polls showing that while right-wingers adore him, a majority of American voters don’t like or trust the president very much.

The only policy he got a favorable mark on — his negotiations with North Korea over its nuclear weapons program — now looks like a failure.

I’m sure many Trump supporters look at these results and celebrate. Certainly, his supporters, who don’t even pretend to care what the majority of U.S. voters think, couldn’t give a damn what a bunch of foreigners think. In fact, they relish the negative reaction Trump receives around the world.

Why should the president of the United States try to please other people? He was elected to make “America First.”

All of that requires cooperation from other countries.

But Trump has squandered his soft power. He has ignored and weakened multinational organizations, such as the World Trade Organization, the North Atlantic Treaty Organization, the United Nations, the G-7, the European Union, and the Trans-Pacific Partnership.

Perhaps these organizations are sclerotic and less than effective, but American presidents before Trump have found them useful in furthering American interests.

When you are dealing with difficult cases, such as China’s mercantilism, Iran’s bid for regional supremacy, or North Korea’s gamble to acquire nukes, it’s best to go into the room with plenty of backup from powerful countries that share your concerns.

That’s something Trump can’t do. He is the greatest negotiator; he has no equals, only flunkies and sycophants. He needs no help except from those he’s bullied or bribed (or who have bribed or bullied him).

Trump’s narcissism blinds him to the power of voluntary cooperation, win-win diplomacy, and the rule of law to solve our common problems. Every crisis is a test — not of American power or of the global consensus — but of Donald Trump himself. Trump puts his own interests first.