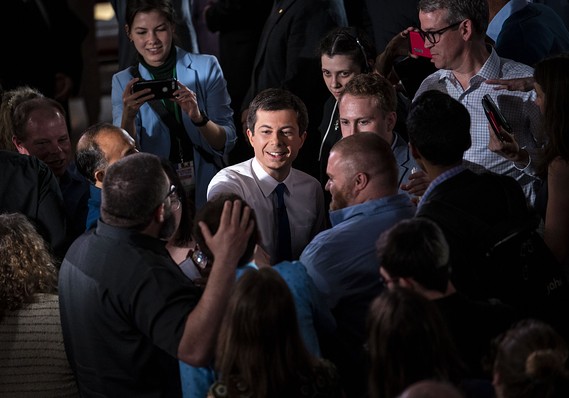 Pete Buttigieg greets supporters after a town hall in New Hampshire last May.

A veteran Washington observer has looked into his crystal ball and seen that Pete Buttigieg winning the presidential election in November, alongside his running mate, Stacey Abrams of Georgia.

The prediction comes from Carl Leubsdorf, a columnist with the Dallas Morning News, who served as that paper’s Washington bureau chief for 27 years. His column, published Wednesday, mirrors the semi-serious year-end predictions made famous by the late William Safire of the New York Times

Leubsdorf forecasts that Buttigieg will get the most votes at the Iowa caucus in February and finish second in New Hampshire. The mayor of South Bend, Ind., will then break free from the pack with strong showings on March 3, known as “Super Tuesday,” and two weeks later with wins in Arizona, Illinois, Ohio and Florida, in Leubsdorf’s view.

Sen. Bernie Sanders, an independent from Vermont, will not concede the race until the Democratic convention in July, Leubsdorf predicts.

Last year, Leubsdorf correctly predicted the House of Representatives would impeach President Donald Trump and that the Washington Nationals would win the World Series.

On election day, the Buttigieg-Abrams ticket will win the election with the bare minimum of 270 electoral votes, with Indiana providing the winning margin as a result of the backlash for dropping Pence, who was that state’s governor from 2013 until 2017. (Buttigieg’s mayoralty of his northern Indiana city began in 2012.)

Key Words (may 2019): Abrams breaks from Buttigieg: ‘Identity politics is … exactly how we won’