Home
Stocks
Need to Know: Why UBS thinks Amazon shares are headed to $2,100
Prev Article Next Article
This post was originally published on this site

The headlines are all about President Donald Trump’s impeachment, but the stock markets don’t care.

And unless investors begin to think a Republican-controlled Senate will vote to remove him, that attitude won’t change.

With just eight trading days left to go in the year, it’s tough to get markets excited about much right now, whereas a year ago they were pretty volatile.

How about some stock ideas for 2020? We bring you those via our call of the day from UBS, which polled its North American managers to get their most compelling ideas going forward. Read on:

Amazon.com AMZN, -0.37%   — UBS has a $2,100 target on buy-rated Amazon — 17% upside from Wednesday’s close of $1,784.03. Analyst Eric Sheridan believes investor concerns about the high costs of one-day shipping and investments in Amazon Web Services are now reflected in share prices. And, of course, Amazon dominates in e-commerce, cloud computing, digital ad and media consumption.

Tenet Healthcare THC, +1.04%  — The investment bank rates the health care company’s shares a buy, and sees 40% upside for shares, with a price target of $53 (Wednesday’s close — $37.98). Wall Street is just too negative, says analyst Whit Mayo, who expects management to announce another cost reduction program next year. That would be another boost for shares.

Coca-Cola KO, -0.94% — “We like Coca-Cola for stable earnings growth to ride out defensive times,” says analyst Sean King, who has a $63 price target on the buy-rated drinks giant (a 16% gain from Wednesday’s close of $53.91. And the company is on the way to improving its free cash flow productivity, a long concern of investors. Bet on Coke over Pepsi PEP, -0.15%,  he says (Morgan Stanley said the same recently).

United States Steel X, +0.96%  — UBS is convinced that investors should sell the steel group, laying out a price target of $7 per share — a 48% drop from Thursday’s close of $13.61. Analyst Andreas Bokkenheuser says the company is set to lose market share in an environment where pricing is competitive, and will probably burn cash over the next two years to invest in key assets.

Read: Hedge fund luminary Stanley Druckenmiller on what could trigger a bear market

Why we should follow what #Sweden just did:
The #Riksbank (central bank) parted ways with its counterparts, hiking rates due to concerns about the damage caused by negative yields
Question now is whether, being a “small country” in economic terms, it can manage being the outlayer pic.twitter.com/bCJywQKIWp

Our chart from investment management company BlackRock (via The Daily Shot blog) gives a pretty good visual on this year’s big winning sectors in the U.S., and puts global equity performances in perspective. 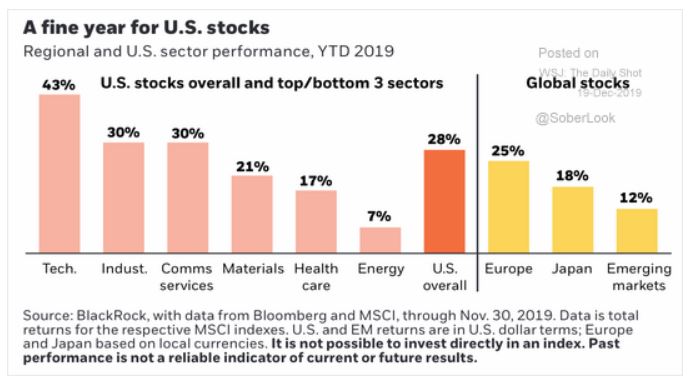 Shares of Micron MU, +0.08%  are up. The memory-chip maker posted a huge drop in net income, but Chief Executive Sanjay Mehrotra said the company’s worst times may be over. Shares of rivals Western Digital WDC, -0.02%  and Nvidia NVDA, +0.53%  are also climbing.

Sportswear brand Nike NKE, +0.92%  will report earnings after the close.

No golden carriage this time as the Queen heads back to U.K. Parliament

Once highly sought-after, thousands of giant dogs are now roaming Tibet and China