Home
Market
Aramco shares slip on day of MSCI, Tadawul inclusion
Prev Article Next Article
This post was originally published on this sitehttps://i-invdn-com.akamaized.net/trkd-images/LYNXMPEFBH0FJ_L.jpg 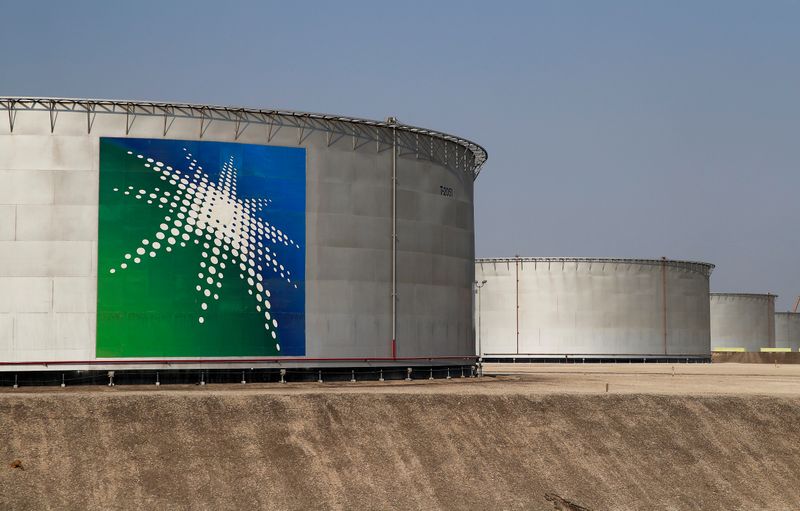 By Davide Barbuscia and Tom Arnold

DUBAI (Reuters) – Saudi Aramco (SE:) shares fell almost 3% on Wednesday as investors pocketed profits on the day it was included in the MSCI Emerging Markets Index () and the Saudi Tadawul index ().

The oil giant’s shares, which were originally priced at 32 riyals, slipped from Tuesday’s close to open at 37.5 riyals ($10.00). After shedding further value during the day, they eventually closed 2.8% lower at 36.7 riyals.

Inclusion in a benchmark index attracts inflows from passive investors who track those indexes but can lead to some initial profit taking, especially if funds or retail investors bought in advance of a company being added.

“It’s common after the addition to the MSCI, lots of profit taking,” said a Saudi banker.

On the Tadawul all-share index it had a 12% weighting, the largest after Al Rajhi Bank (SE:) at almost 14%, Refintiv data showed. A cap of 15% limits the risk from a single security representing a large percentage of the index, as well as limiting correlation to the oil price.

Dubai-based Arqaam Capital calculated Aramco’s inclusion in the MSCI index would attract about $710 million in passive inflows to the company’s shares, with a further $400 million likely when Aramco joins the global benchmark on Thursday.

Despite its size, Aramco’s weighting in MSCI’s emerging markets index is less than companies such as Alibaba Group (N:) at 5.84% and Taiwan Semiconductor Manufacturing (TW:) at 4.25%, according to an MSCI report dated the end of November.

Aramco’s IPO is the centerpiece of Saudi Crown Prince Mohammed bin Salman’s vision for diversifying the kingdom away from its oil dependency by using the $25.6 billion raised to develop other industries.

Despite some scepticism about the firm’s worth, it hit the $2 trillion market valuation long-sought by the prince on its second day of trading, only losing momentum on Tuesday.

Analysts at Jefferies this week initiated coverage of the stock with an “underperform” rating, estimating Aramco’s value at $1.6 trillion and citing governance concerns due to the close relationship between the firm and the Saudi government.

But Ashmore’s Evans said Aramco can attract a wider institutional investor base going forward as it builds a track record with investors and weathers the pressure of equity markets.