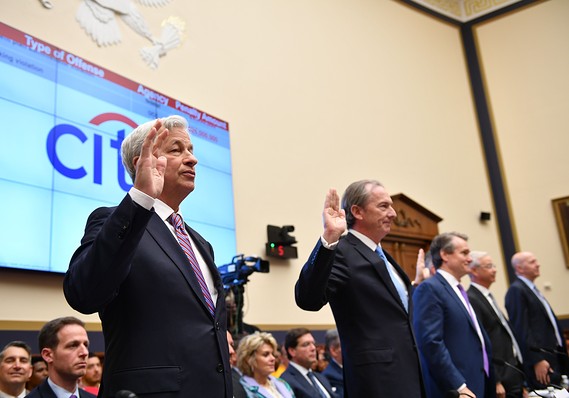 JP Morgan Chase & Co. CEO James Dimon and others bank CEOs are sworn in before they testify before the House Financial Services Committee in April.

The “living wills” of six of the eight largest banks have shortcomings that need to be fixed by March, federal banking regulators announced on Tuesday.

Officials said that the problems at the banks were not as severe as they might have been. The Federal Reserve and the Federal Deposit Insurance Co. stressed they didn’t find any more severe “deficiencies” in the bank’s living wills. The agencies defined deficiencies as “weaknesses that would result in any additional prudential requirements if not corrected.”

So-called living wills are the resolution plans banks have to draft to show that they can fail without a bailout from taxpayers.

The firms will receive detailed letters about the weaknesses and the mitigation required. Plans to address the shortcomings are due by March 31.

The two agencies said they planned to focus on testing the resolution capabilities of the firms when reviewing the next plans.

“Resolving a large bank would be challenging and unprecedented, and the agencies expect the firms to remain vigilant as markets change and as firms’ activities, structures and risk profiles change,” the regulators said in a joint statement.