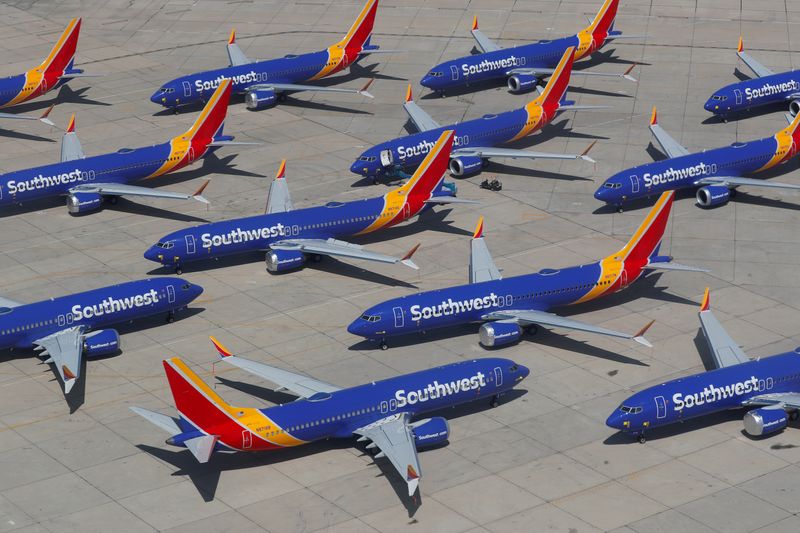 By Jamie Freed and Tracy Rucinski

SYDNEY/CHICAGO (Reuters) – Boeing (NYSE:) Co has decided to suspend production of its best-selling 737 MAX model from January, the plane maker’s biggest assembly-line halt in more than 20 years, as repercussions from two deadly crashes drag into 2020.

The U.S. manufacturer said on Monday it would prioritize the delivery of the 400 737 MAX jets it had made since the model was grounded globally rather than feeding more airplanes into production.

“This temporary move will put our system in a better position to recover and more efficiently deliver completed airplanes once we safely return the 737 MAX to service,” Boeing Commercial Airplanes Chief Executive Stan Deal told employees in a memo seen by Reuters.

Global airlines also have more than 370 of the planes that were delivered between the 737 MAX’s May 2017 introduction and March 2019 grounding and are now parked at airports and at desert storage around the world.

HOW WILL THE 737 MAX PRODUCTION FREEZE IMPACT AIRLINES?

The immediate impact is likely to be muted because once the U.S. Federal Aviation Administration (FAA) approves the 737 MAX to resume flying, airlines’ first priority is to prepare the 737 MAX jets already in their fleets to return to service.

Then they will look to take delivery of the 400 planes that have been produced since the grounding.

Analysts estimate Boeing has the ability to deliver a maximum of 70 of the planes to customers per month, meaning getting through that backlog would take nearly six months, even if it kept the pause on production for that entire period.

FAA approval to resume flying is not likely until at least February and could be delayed until March, U.S. officials have told Reuters.

Other global regulators, including in Europe and China, have indicated they could take even longer to approve the plane’s return.

737 MAX operators Southwest Airlines (NYSE:) Co , United Airlines Holdings Inc and Fiji Airways said they were studying Boeing’s announcement on the production halt and were unable to comment immediately on the impact to their schedules and capacity plans.

HOW LONG WILL IT TAKE AIRLINES TO RETURN THE 737 MAX TO SERVICE ONCE REGULATORS APPROVE IT?

Airlines will have to install Boeing’s new software, run a series of maintenance checks on their idled jets and implement the recommended pilot training, the latter of which could vary from country to country.

U.S. carriers have said the process will take at least a month following FAA approval.

The return could also depend on regulators outside an airline’s home jurisdiction. Singapore Airlines Ltd has said that even if Singapore approves the return of the 737 MAX, it will need permission from authorities in Indonesia and China for its planes to resume their normal routes.

WILL THE RETURN OF HUNDREDS OF GROUNDED PLANES LEAD TO OVER-CAPACITY?

The impact will vary in different regions. In the United States, 737 MAX operators like Southwest, United and American Airlines (NASDAQ:) Group Inc have said they see demand for the flight frequencies and routes they plan to restore or launch when the model returns.

Analysts, however, have expressed concern about the impact of any slowdown in U.S. consumer spending.

In Europe and Asia, travel demand has been more muted in recent months as economic growth slows, leading to a risk of heightened competition and declining fares once the 737 MAX returns.

“Airlines in Europe are actually quite happy with the delay as it removes over-capacity from the market at a time when the economy is in slo-mo,” Bernstein analyst Daniel Roeska said.

Passenger demand growth in Asia fell to 3.5% in October from 6.2% a year earlier, showed data from the Association of Asia Pacific Airlines. Its members are cautious about the outlook for 2020 after trade disputes undermined confidence and led to economic growth below initial forecasts this year.