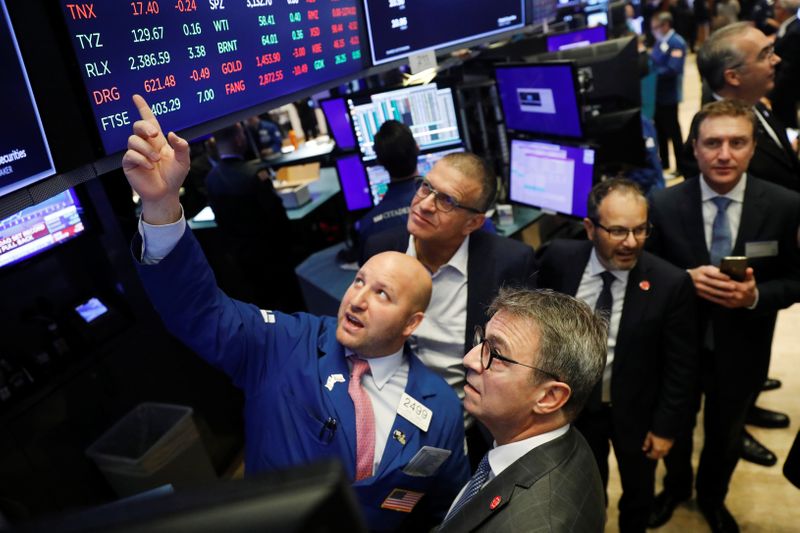 © Reuters. FILE PHOTO: CEO of Kaleyra, Dario Calogero, looks up at a board before the company’s IPO above the floor of NYSE shortly after the opening bell in New York

(Reuters) – Wall Street notched a fresh record high on Monday as investor confidence was boosted by upbeat data from China, while cooling trade tensions between the world’s two biggest economies removed one of the hurdles for global economic growth.

Data showed China’s industrial output and retail sales growth accelerated in November, adding to optimism from the announcement of a trade deal by the two sides on Friday.

Apple Inc (O:), among the biggest companies to benefit from the deal, rose 1.7%. Chipmakers that make the components for its iPhones also gained.

“This deal could be the start of a series of phased rollbacks (in tariffs), which could unlock further upside for equity markets, driven by an improvement in business confidence and a recovery in investment,” said Mark Haefele, chief investment officer at UBS Global Wealth Management.

On Sunday, U.S. Trade Representative Robert Lighthizer said the trade deal was “totally done” and expected it to nearly double U.S. exports to China over the next two years.

The benchmark S&P 500 has risen in nine of the past ten weeks on the back of improving trade sentiment, a solid third-quarter earnings season, a dovish Federal Reserve and upbeat economic indicators.

In its policy meeting last week, the Fed stood pat on interest rates, as expected, and kept the bar high for future reductions.

Technology stocks () rose 1.2% and led gains among the 11 major S&P 500 sectors. Financials () rose 1% after brokerage Citigroup (NYSE:) bumped up its price targets on the big banks.

Boeing Co (N:) fell 2.3% on reports the planemaker was considering whether to cut or halt production of its grounded 737 MAX aircraft.