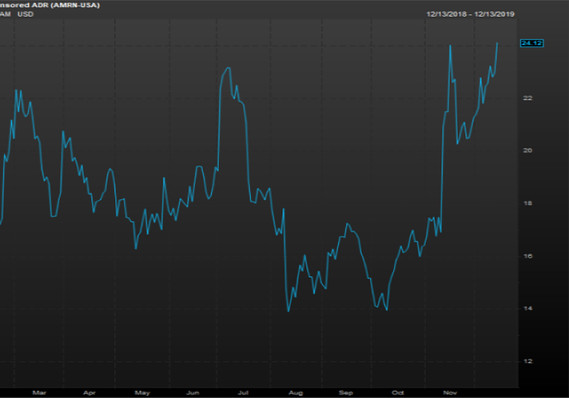 Amarin Corp.’s stock moved toward a new decade-high price in the extended session Friday after a Food and Drug Administration marketing approval that gave its drug Vascepa a wider use.

U.S. traded shares of Dublin-based Amarin AMRN, +4.92%  rose more than 5% Friday after being halted for half the trading day and into the after-hours session . The American depositary receipts were halted at 10:06 a.m. Eastern time pending the news with shares trading at $24.12, the highest closing price for Amarin since 2007, then headed higher after resuming trading at 5:30 p.m.

“Vascepa is the first FDA approved drug to reduce cardiovascular risk among patients with elevated triglyceride levels as an add-on to maximally tolerated statin therapy,” the agency said in an announcement.

“It is estimated that millions of high-risk patients in the United States could benefit from this one-of-a-kind prescription therapy,” Amarin said in its own statement. The company doubled its sales force in anticipation of the new approval earlier this year, and announced Friday it was on track to doubling the sales force again to 800 sales reps “near the beginning of 2020.”

Analysts surveyed by FactSet had projected full-year revenue of $410.3 million for Amarin, and 2020 revenue of $654.6 million.

“Beyond 2020, Amarin believes that Vascepa total net revenue will grow to reach multiple billions of dollars,” the company said in a statement. “However, the history of other therapies for chronic conditions suggests that growth builds over multiple years. At this time, the company is not providing guidance regarding annual revenue levels beyond 2020.”

Amarin said it will host a conference call on Monday at 7:30 a.m. Eastern time to discuss the approval and its business moving forward.