Home
Stocks
Market Extra: Where will the S&P 500 go in 2020? Here are the most bullish and bearish strategists
Prev Article Next Article
This post was originally published on this site

With the U.S. Thanksgiving holiday in the rearview mirror and Christmas rapidly approaching, Wall Street investors are turning their attention to 2020 and what the new year will bring for the stock market.

And while there are a range of views regarding the performance of U.S. equities in the year to come, the top strategists on Wall Street unanimously agree that next year’s performance will come nowhere near that of 2019, with only one of those surveyed by MarketWatch predicting the S&P 500 to rise 10% next year from Monday’s close, while a few are predicting year-over-year declines in the large-cap index. 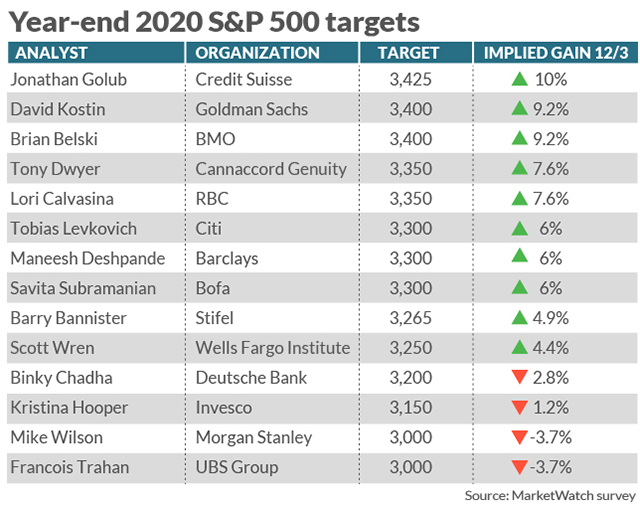 Credit Suisse’s Jonathan Golub is the most bullish on the list, predicting the benchmark S&P 500 index will rise to 3,425 by 2020’s end, a 10% increase from Monday’s close. Golub argued in a recent note that 2020 will bring a sharp rebound in economic performance similar to what was experienced in 2016 going into 2019. He also predicted continued strength in corporate buybacks that will help the forward price-to-earnings multiple on the S&P 500 rise from 18.1 to 18.9 by year’s end. This expansion, along with 5.6% earnings-per-share growth, forms the basis for Golub’s target.

Read more: Here are the most accurate S&P 500 predictions of the year, so far

David Kostin, chief U.S. equity strategist at Goldman Sachs has the second most optimistic target in the sample. He argued in Goldman’s 2020 outlook note that S&P 500 companies will benefit from above-average growth in 2020 and rising profit margins that will boost EPS by 5%, while low interest rates and relatively poor returns in other asset classes like bonds will push the market multiple to 18.6.

Once again, Morgan Stanley’s Michael Wilson is the most bearish strategist surveyed, with a base case that the S&P 500 falls to 3,000 by the end of next year. “Easier monetary policy and trade stabilization will help global growth accelerate, but only stabilize GDP growth in the US at 1.8%, leaving pressure on corporate margins from tight labor markets,” he wrote in a note to clients.

He argued that central bank stimulus may keep stock prices elevated in the near term, “but by April, the liquidity tailwind will fade and the market will focus more on fundamentals, where uncertainty is higher than normal.”

Wilson believes that profit margin headwinds and sluggish U.S. economic growth will keep earnings gains nearly non-existent, as has been the case in 2019, while international trade and policy uncertainty will keep a lid on equity valuations. Better growth prospects abroad “and cheaper valuations means we prefer non-U.S. equities to the U.S.,” he wrote.

UBS’ Francois Trahan also has a target of 3,000 on the S&P 500 for the coming year, driven by what he predicts will be an earnings recession — or two or more consecutive quarters of declines in S&P 500 earnings.

“Directly in front of us, we see S&P 500 forward earnings falling and expect them to remain under pressure for several quarters,” Trahan wrote in a recent 2020 outlook note. He said that earnings declines in small cap stocks are presaging what will happen to large caps as a slowing of economic growth, which began in 2019, continues next year.