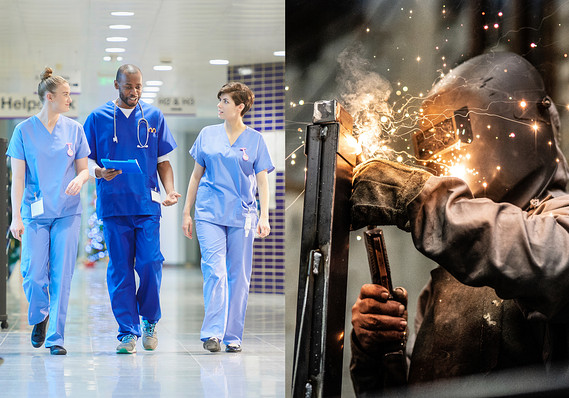 The health-care industry is where the new jobs are these days. Not blue-collar occupations.

The men and women in blue scrubs are winning out over the folks with blue collars in the U.S jobs market.

Employment in the health-care industry has jumped 414,000 in the past year, tying it for white-collar jobs as the fastest-growing field. It’s easily No. 1 if social assistance such as elderly care is included.

The huge service side of the U.S. economy typically creates most of the new jobs these days, but the disparity has become even more lopsided in the past year.

Some 89% of the jobs created in the last 12 months have been in areas such as health care, leisure and hospitality, transportation, delivery and professional occupations. By contrast, these service jobs accounted for 74% of new jobs just one year ago.

Manufacturing is a much smaller part of the U.S. economy now than it was 40 or 50 years ago, but hiring has slowed sharply since the spring. The industry has added just 76,000 new jobs in the last 12 months.

In 2018 manufacturing added more than a quarter of a million new jobs.

The trade war with China has disrupted supply chains around the world, increased prices for some raw materials and hurt exports.

Construction has fared better, but not a lot better. The industry has created almost 150,000 new jobs in the past year, though that’s less than half as many as it created in 2018.

Manufacturing and construction jobs tend to pay at or above the national average. So the decline in hiring has also hurt overall wage growth.

Hourly wages grew at a 3.2% yearly pace in November, a bit short of the postrecession high of 3.4% set in February. Worker pay has flattened out this year after a steady rise that began in 2014.