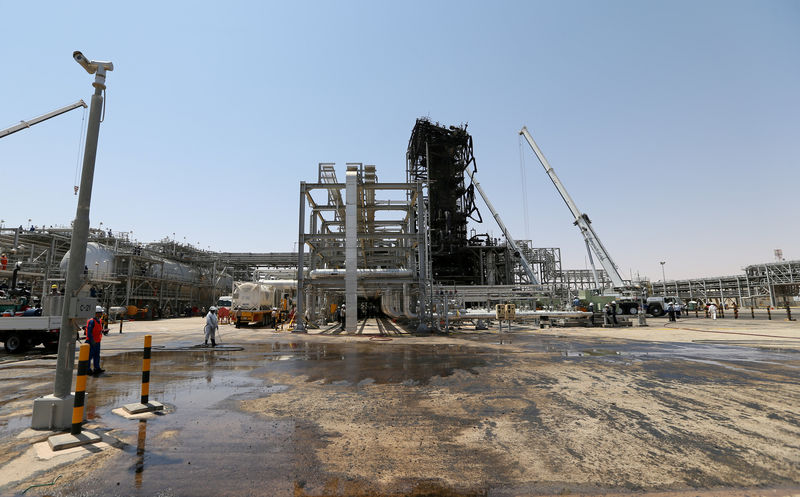 LONDON/RIYADH (Reuters) – Saudi Aramco is looking to buy insurance against war and terror attacks after a damaging drone and missile attack on some of its oil facilities in September, two sources told Reuters.

Aramco, the world’s largest oil company, has been looking for cover from insurers including those based at Lloyd’s of London and elsewhere in the London market, they added.

The firm is seeking cover for facilities in Saudi Arabia’s Eastern Province, its oil heartland, where it suffered the September attacks, one of the sources said.

Aramco said in the prospectus of this month’s planned listing that it did not insure against all risks and its cover may not protect it from terrorism or acts of war.

At the launch of the IPO, which could be the world’s biggest and raise up to $25.6 billion, Aramco said that it did not expect the Sept. 14 attack to have a material impact on its finances and operations.

Available insurance options range from cover against a terror attack or sabotage through to full coverage, which includes war or civil war, along with compensation for the cost of business interruption.

An initial loss estimate from the strikes on Aramco’s plants was 2 billion riyals ($533 million), a third source said.

Aramco insures much of its property itself through a so-called captive insurer, Bermuda-based Stellar Insurance.

Although one of the sources said Aramco also has an “excess of loss” cover with international insurers for any property damage above $200 million, this does not cover war or terror attacks, or revenue losses due to business interruption.

Aramco, which said in October it had fully restored oil output after the September attacks on its facilities, did have war cover around five years ago, the source added.

Companies have become nervous about attacks on their property in Saudi Arabia, the world’s top crude exporter, after the strikes which temporarily shut down 5.7 million barrels per day (bpd) of Aramco’s output, more than 5% of global oil supply.

As well as Aramco, a Saudi petrochemical company is also looking for terror and war insurance in Eastern Province where the attacks took place, a fourth source said.

“We have received more enquiries,” said Scott Bolton, director, crisis management at insurance broker Aon (N:), adding that both domestic and international companies were checking whether they were covered for such attacks. Saudi Basic Industries Corp (SABIC) (SE:), which Aramco agreed to buy in a $69.1 billion deal this year, already has war insurance, one of the sources said.

SABIC did not immediately respond to a request for comment, but said in its 2018 annual report that it “kept a close eye on emerging geopolitical interruption risks” and had added cyber insurance to its global insurance program.

Riyadh and Washington have blamed the September strikes on Iran, which denies involvement. The United States has sent troops to Saudi Arabia, which it says is aimed at deterring further attacks amid heightened regional tensions.

The cost of war and terror policies in Saudi Arabia has risen by “multiples” since the attacks, one of the sources said without giving more detail on pricing. Another added that companies in the region were “waking up” to the idea.

AM Best confirmed Stellar’s financial strength rating of A (excellent) with a stable outlook in October, adding that the insurer had indicated its property program had “no exposure” to the strikes.

The captive has a “diversified panel of financially strong reinsurers”, AM Best said.

Global reinsurers Hannover Re (DE:), Munich Re (DE:) and Swiss Re (S:), which help insurers cover large risks, declined to comment, while Aon (N:) said it did not have “visibility” into whether Aramco was seeking insurance.