Home
Stocks
Need to Know: The global economy is ‘bottoming out’ and that’s good news for stocks, says Deutsche Bank
Prev Article Next Article
This post was originally published on this site

Is that you Santa Claus?

December has kicked off with upbeat news on Chinese factory activity, and global equities are up. Who knows, that traditional December rally may not just be some fairy tale of New York.

Our call of the day, from Deutsche Bank strategists who are sounding an all-clear over one big debate this year, looks timely. “There are signs that the global economy is bottoming out. We now expect an improvement in global growth next year,” write Henry Allen, Quinn Brody and Jim Reid, in a new report.

“Key to our optimism is that the risks of trade wars and Brexit are evolving in positive ways, and the possibility of a radical policy shift to the far left in the U.S. and the U.K. after their respective elections seems remote,” said the team.

Confidence on the global front underpins their market views. “We remain bullish on equities, especially the U.S., where we expect the S&P 500 to move higher by the end of Q1 next year,” say the team.

Among the downside risks are escalation of the U.S.-China trade war; an extension of tariffs to Europe, which would hit global growth hard and trigger recessions; rising tensions between Iran and Saudi Arabia; and a U.K. crash out of the E.U.

Here’s Deutsche Bank’s chart of the best-performing assets this year.

Market gains were trimmed after U.S. President Donald Trump threatened steel tariffs on Brazil and Argentina in a tweetstorm.

That’s as some sources say a U.S.-China phase one trade deal won’t come until the end of December at the earliest. Elsewhere, China will sanction several American pro-democracy organizations in retaliation for U.S. legislation supporting Hong Kong protesters.

Our chart, from Raoul Pal, the author of the Global Macro Investor newsletter, compares bets on U.S. interest rates from 2019 with 2001. He expects interest rates to fall, so eurodollar futures, shown in the chart, to rise: 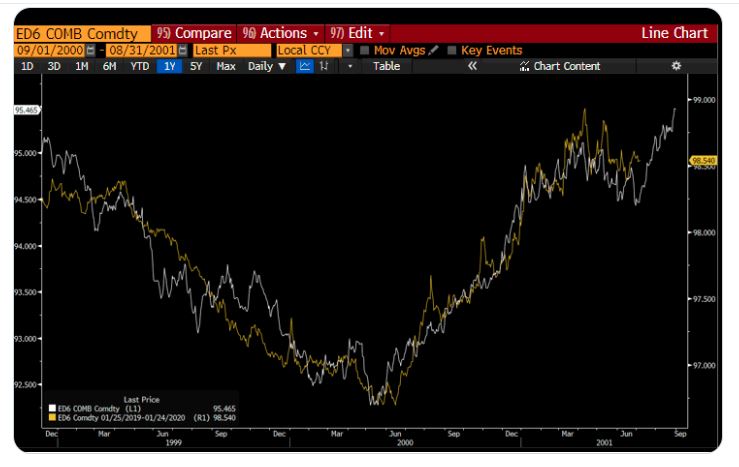 I have been flagging all year how similar 2001 is to now. The best trade is the Eurodollar trade, by far the best risk-adjusted trade in 2019. It is a complete re-run of 2001 (read my Great Trade Ever tweet from the past). This is that trade, in repeat – 2019 and 2001 overlaid. pic.twitter.com/3VIlQ4t7JD

“Consumerism is a virus that affects the faith at the root, because it makes you believe that life depends only on what you have, and so you forget about God who comes to meet you and who is next to you.” — Choice words for the shopping season from Pope Francis in Rome on Sunday.

A busy week that ends with November jobs data kicks off with the Markit manufacturing purchasing managers index, the Institute for Supply Management’s manufacturing index and construction spending.