After nearly a decade of ever-escalating home prices and frenzied bidding wars, many buyers are wondering if finding an affordable piece of real estate has become about as likely as discovering a mint condition Honus Wagner baseball card in your stuff drawer, a double eagle coin on your dresser or a unicorn in your driveway.

But wait! The list of markets where folks can score a home without shattering the bank is, in fact, growing. About 81% of housing markets have become more affordable since the beginning of the year, according to a Realtor.com report.

Reality check: This doesn’t necessarily mean that it’s suddenly a cinch to become a homeowner in these areas, only that it’s getting a little better for tapped-out buyers. And in a hot market, every little bit helps.

So we decided to take a deep dive into where home affordability is increasing—and decreasing—the most. To figure this out, we looked at home prices as well as local household income in the 100 largest metropolitan areas in the third quarter of the year.* (Metros include the main city and the surrounding towns, suburbs, and smaller cities.)

So what’s driving the more affordable side of the equation?

“Mortgage rates are much lower than they were, and incomes have actually grown this year for most Americans,” says George Ratiu, realtor.com’s senior economist. “Those two things combined have led to an improvement in affordability for home buyers.”

Nationally, affordability rose the most in predominantly midsize cities, many in the Midwest and South. These places tend to have strong economies and job markets and a larger supply of available homes for sale.

With the potential to make good money, more buyers in these areas are positioned to become homeowners or to trade up to nicer residences.

In most of these markets, millennials looking for homes where they can raise growing families are still competing with Generation Xers searching for move-up residences, and baby boomers wanting to find their forever abodes.

But in most cases, inventory isn’t plunging by the double digits, which leads to insane price increases. (The one exception on our list was Jackson, Miss., No. 8, where the number of homes for sale was down a steep 14.5% in October compared to a year ago.)

The inventory situation is trending in a whole different direction, however, in markets where homes are becoming less affordable.

Affordability primarily dropped in smaller cities with good job markets—places that are growing in popularity with cost-conscious buyers from other parts of the country. These cities tend to be far from the bigger, more expensive metros.

The influx of new residents is putting the squeeze on inventory, meaning that the number of homes for sale plummets and that prices spike.

“Before the recession, a lot of young professionals flocked to coastal cities looking for better-paying jobs and an urban lifestyle,” says Ratiu. “What we’re seeing now is a lot of the same professionals, approaching 40, with families and kids, are returning to their hometowns in the Midwest and South, looking for a better quality of life and a more affordable housing market.”

OK, so let’s take a deeper look—first at the places where buying a house is getting a bit easier.

Where has it become more affordable to buy a home? 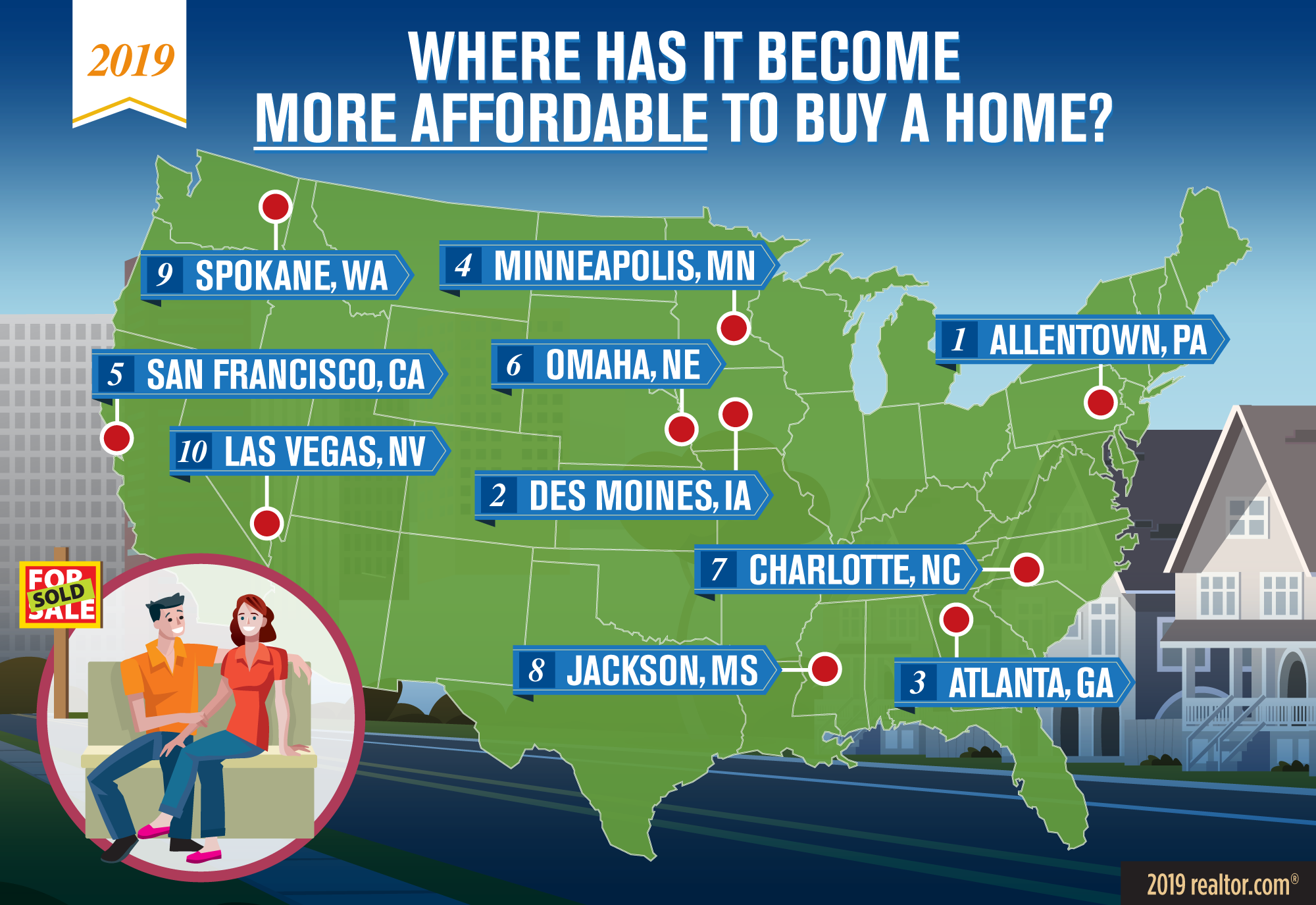 Where should buyers on a more limited budget go? They might want to head to the heart of the Rust Belt, to Allentown, Pa. a one-time industrial powerhouse that fell on hard times, inspired a catchy-but-depressing Billy Joel song, and is now staging a strong comeback. Affordability in the rebounding area improved the most compared to the rest of the nation.

Already-low real-estate prices in the former steel town slipped almost 1% in October compared to the previous year, according to Realtor.com data.

About a third of her clients are professionals, either starting out their careers or beginning to contemplate retirement and coming from pricier New Jersey or the Washington, D.C., area suburbs.

“They come here, and they can get similar jobs with less of a commute, a better quality of life, and a more distinguished home—for a much more affordable price tag.”

She noted Allentown’s convenient location, about 90 miles west of New York City and 60 miles north of Philadelphia. The area also boasts plenty of outdoor activities, such as fishing, hiking, and skiing. New businesses are moving into Allentown’s downtown area, helping to revitalize the city.

“You can live in a three-bedroom Cape Cod home in a cute West End neighborhood in Allentown for $200,000,” says Brenneisen. “And you can walk to restaurants and shopping and theater.”

In Des Moines, which placed just behind Allentown in affordability gains, median-income buyers could afford 56% of homes on the market. That’s because a current surge of available homes, thanks to heavy sales activity, resulted in an 8.1% annual drop in prices.

Add in the metro’s booming job market, and the result is that more folks can finally get into the housing market. (The financial firm Principal Financial Group is headquartered in Des Moines, and the companies Nationwide Insurance, UPS, and John Deere have operations there.)

With 5.7% more homes for sale year over year, they don’t have to bid up the prices to score the keys to a new abode.

Walter works with a lot of millennial buyers moving out of their apartments and into single-family homes as they begin to start families.

“A lot of people have enough [home] equity, and they’re comfortable enough with the economy to move up [into nicer houses]—or, if they’re retirees, to downsize.”

There were a few surprises on our list. For example, it’s getting more affordable to buy a home in—wait for it—the nation’s most notoriously expensive market, San Francisco!

But take that with a shaker full of salt. The median price in that metro is still an astronomical $940,000—well out of reach of the vast majority of those who are not millionaires. If they’re earning the median household income for the Bay Area, buyers can only afford 18% of the listings available.

In San Francisco, lower mortgage rates have played a role in boosting the area’s affordability, says Patrick Carlisle, chief market analyst in the Bay Area for the real-estate brokerage Compass.

Plus, after years of sky-high annual price rises, the market has flattened, he says. Even in the United States’ tech and startup capital, home prices can’t go up forever.

“People bumped their heads up against the ceiling of what they could (or were willing to) pay,” Carlisle says,

Sorry to put a damper on things—now it’s time to zero in on places where it’s becoming harder to make that big down payment.

Where has it become less affordable to buy a home? 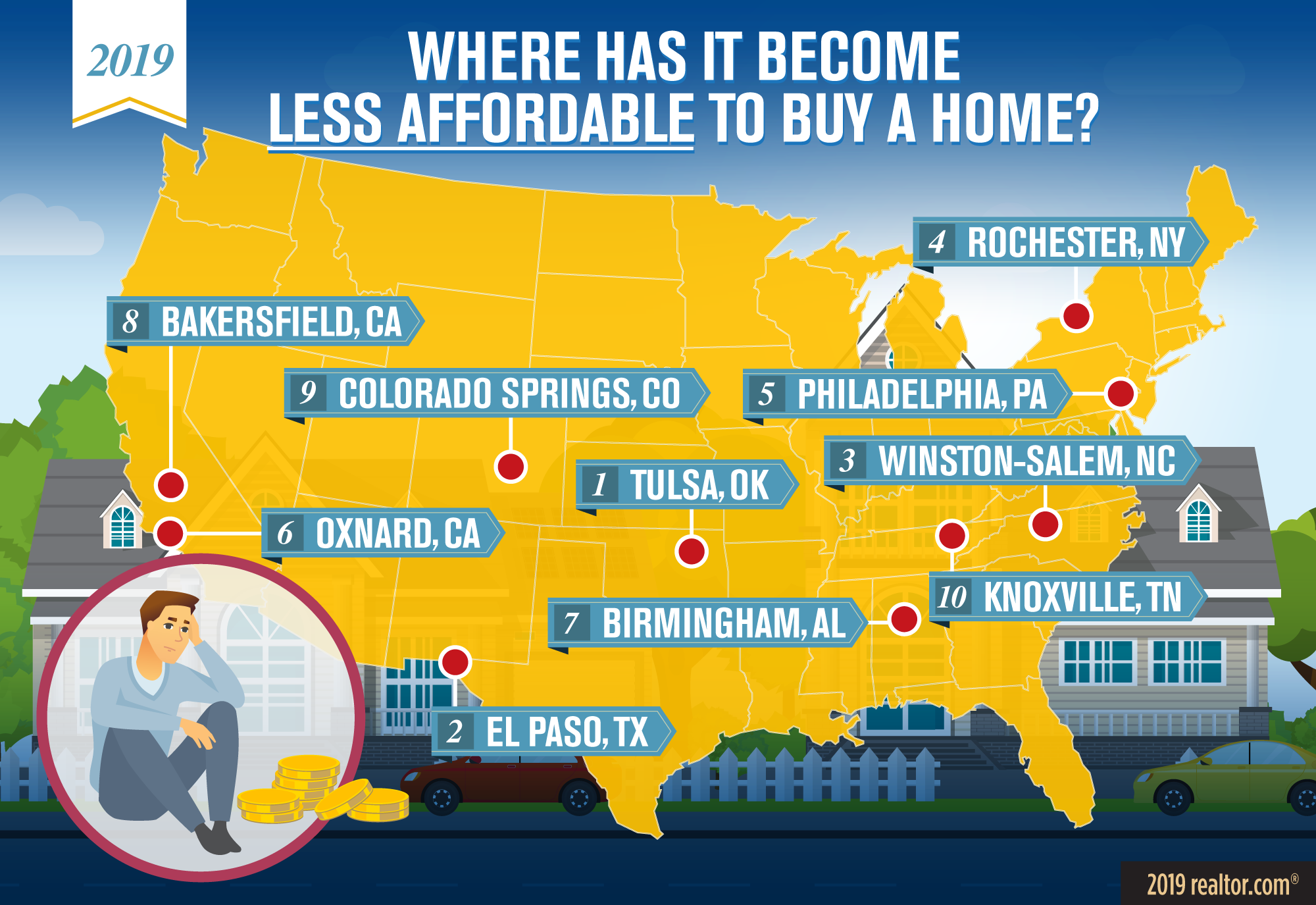 Just because it’s getting a little easier to buy a home in many parts of the country, it doesn’t mean the real-estate market is finally hunky-dory for aspiring homeowners who aren’t raking in high six-figure salaries.

Only 18% of markets are truly affordable for the folks who live there, according to the report. Even in metros showing signs of improvement, home prices are still well out of reach for many regular folks.

Metros where it’s becoming even harder for locals to purchase a home are more often than not seeing big inventory decreases. That lack of supply leads to surging prices—which effectively puts the kibosh on any dreams of homeownership.

“Demand has been so strong, it’s pushing demand up,” says realtor.com’s Ratiu. “More people want to buy homes than there are homes for sale.”

Tulsa’s affordability dropped the most in the nation, as its home inventory plummeted. It nose-dived roughly 26% in October compared to the previous year, according to realtor.com data. That’s thanks to a rush of opportunistic buyers entering the market when mortgage interest rates fell.

First-time buyers and investors gobbled up whatever they could find, leading prices to shoot up by nearly 15% in October compared to the previous year. Tulsa’s median list price was $246,700 in October, according to Realtor.com data.

The scarcity of available homes leads to bidding wars. Tulsa real-estate agent Suzanne Rentz is now getting up to nine or 10 offers within 72 hours on properties in the most desirable areas.

“That wasn’t happening until the last 18 months,” she says. The sweet spot for local and out-of-state buyers are four-bedroom, three-bathroom, single-family homes in the suburbs (often with a pristine backyard) for $250,000.

In the rest of the metros on this list, the number of homes for sale also fell by the double digits. While that’s great for sellers who may not have to make all those needed repairs, or knock down the price, it’s bad news for buyers as they compete against one another.

The number of homes for sale also fell in all of the metros where affordability worsened the most. Inventory was down nearly 20% in El Paso, Texas; 13.7% in Winston-Salem, N.C.; 20.1% in Rochester, N.Y.; and 19.4% in Philadelphia in October compared to the previous year.

This article was first published on Realtor.com