(Editor’s Note: This weekend marks the release of the feature film, It’s a Beautiful Day in the Neighborhood, starring Tom Hanks as Mister Rogers, the popular PBS show host and creator. In celebration, we are republishing this Next Avenue piece about the lessons Fred Rogers shared during his long career.)

You cannot say those words, even many years since Fred Rogers last created new TV shows, without knowing that they’re from Fred Rogers. That gentle voice with the slight drawl soothed even the most restless spirits.

I remember coming home from preschool and having my babysitter turn on Channel 12 — my local PBS channel — to calm me before “rest time.” But it doesn’t matter if you were a child in the decades that Mister Rogers was on TV. Rogers, who died in 2003, created nearly 900 episodes of “Mister Rogers’ Neighborhood” — and in the process, cultivated life lessons to last the rest of our lives. And so much of his wisdom applies to us in our many stages of adulthood.

To celebrate Mister Rogers’ birthday (he would have been 89 in March), here are six of those gems:

1. Routine and responsibility are the bedrock of your day. Every day, Mister Rogers entered the home on his show and did the same things — sang a peppy song, put on his cardigan and changed out of his dress shoes, fed the fish and had a warm conversation with us. Routines are comforting to children, but maintaining a daily routine and something that brings you care and comfort can get you through hard times no matter your age. A sense of responsibility for ourselves and others — another side of many of our daily routines — can do the same. Feed your pets, call or text lonely friends, offer a ride to a neighbor, hug your families. As Rogers sang, “It’s such a good feeling to know you’re alive.”

2. It feels good to make something, even if you aren’t very good at it. In one episode, Rogers used crayons to make a quick picture and illustrate a point, saying a little offhandedly, “I’m not very good at it, but it doesn’t matter. It feels good to have made something.” That’s true — from coloring to roasting a turkey to rewiring a lamp to knitting a scarf to putting together an IKEA dresser (OK, the last one might be a stretch, since your blood pressure may have risen from all the anger and frustration).

3. Put on your sneakers. It always helps to change into your comfortable play clothes at the end of the day. My kids crack up when I come home from the office and tell them I need to change from my work clothes to my play clothes. Even if I wore jeans to work that day, I make a point of changing. It really does add a sense of separation between work and home.

4. The Land of Make-Believe is still there for you. We know a lot about the benefits of meditation and mindfulness, even if — to paraphrase Mister Rogers — you aren’t very good at it. But what about quietly using your imagination to drift and think about how you might make the world better and more magical? Create your own Land of Make Believe. Whether you create characters and a story or just close your eyes and imagine the world in a different light, playing make believe can be good for the soul. Or maybe you’ll brew up an idea that goes from Make Believe to Reality. You don’t even have to take a trolley. 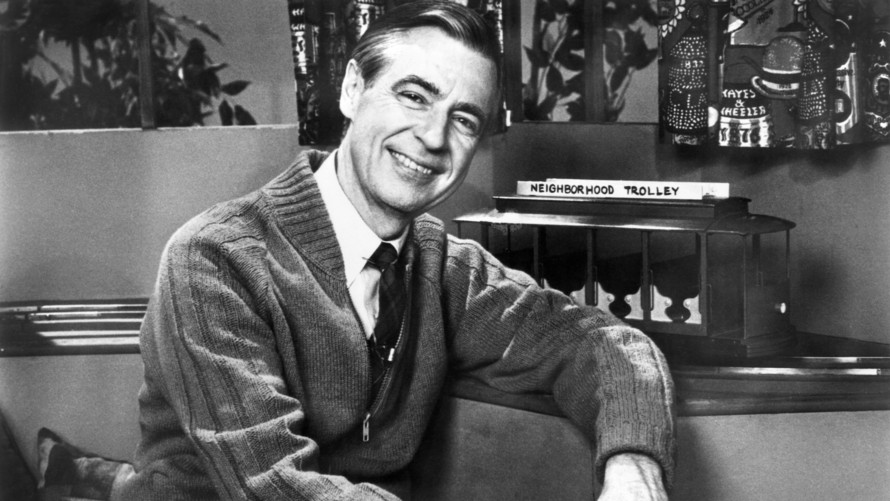 5. Look for the helpers. In recent years, the Fred Rogers Company has published a nice body of parent resources, including an interview with Rogers in which he talked about how to help children get through tragic events. Here’s one quote from it: “When I was a boy and I would see scary things in the news, my mother would say to me, ‘Look for the helpers. You will always find people who are helping.’ To this day, especially in times of ‘disaster,’ I remember my mother’s words and I am always comforted by realizing that there are still so many helpers — so many caring people in this world.” When something terrible happens in your life, do the same. So many people around you are willing to help if they know that you need help. And better yet, now that you’re grown up, you can be one of the helpers for others in times of need.

6. Finally, just be a good neighbor. From Lady Elaine to Henrietta Pussycat to King Friday, Mister Rogers’ friends from the Land of Make Believe often enacted lessons about how to treat each other through times of misunderstanding and hurt feelings. We now live in a time where misunderstanding and hurt feelings abound in real life. Remember, everybody’s going through something they probably aren’t telling you about. Maybe they cannot even articulate it themselves. Rogers demonstrated on his show and in real life that empathy and grace are the most important foundations to being a good neighbor. His birthday seems like a great time to remind ourselves of this particular life lesson and to take a moment and figure out how to go out and be a good neighbor to someone who needs one.

Shayla Stern has spent a career in digital media journalism and content marketing strategy at organizations including washingtonpost.com, Edmunds.com, Cars.com and Fast Horse and as a media professor at the University of Minnesota and DePaul University. She has a Ph.D. in mass communication from the University of Iowa and has published extensive research on social media and gender. Based in St. Paul, Shayla can be reached by email at sstern@nextavenue.org.

This article is reprinted by permission from NextAvenue.org, © 2017 Twin Cities Public Television, Inc. All rights reserved.