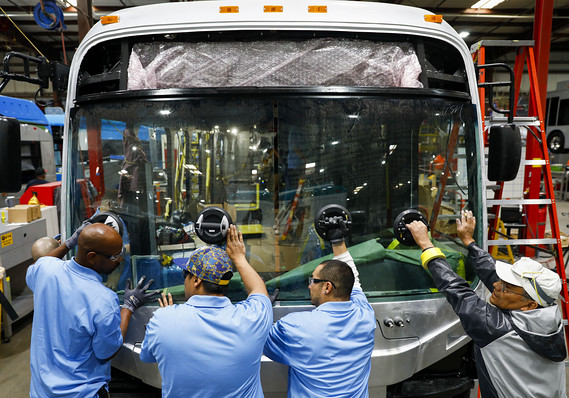 Employees check the fit of a window of an electric bus during production at a factory in Lancaster, California.

The numbers: IHS Markit said its U.S. flash manufacturing sector purchasing managers index rose to 52.2 in November from 51.3 in October. This is the fastest rate since April.

Meanwhile the U.S. flash services sector purchasing managers index in November rose to 51.6 from 50.6. This is the quickest expansion since July.

Any reading above 50 indicates improving conditions. The flash estimate is typically based on approximately 85%–90% of total survey responses each month.

What happened: Manufacturers registered a rise in new orders in November. There was a small upturn in service sector new business also. Both manufacturers and service providers indicated a rise in workforce numbers.

What IHS Markit said: “A welcome upturn in the headline index from the flash PMI adds to evidence that the worst of the economy’s recent soft patch may be behind us,” said Chris Williamson, chief business economist at IHS Markit.

Big picture: The U.S. economy is slowing but economists are divided about how severe the slowdown might be. Manufacturing might have gotten a boost from the end of the United Automobile Workers strike and somewhat easier trade tensions.