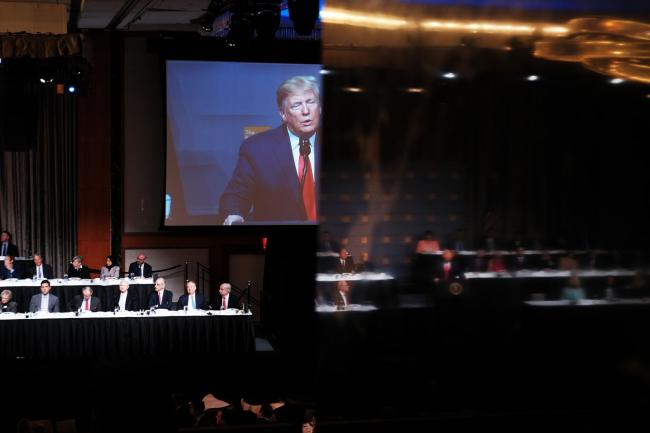 (Bloomberg Opinion) — Markets were widely anticipating that President Donald Trump would use his speech to the Economic Club of New York on Tuesday to trumpet progress on reaching the first phase of a trade deal with China. Instead, all he said was that an agreement “could happen soon.” That’s not exactly the language markets wanted to hear, which helps explain why equity markets spent much of the rest of the day erasing the bulk of their gains.

The S&P 500 Index is now up 23.3% for the year, and whether the rally extends or not is largely dependent on the U.S. and China showing progress in trade talks. But astute market watchers such as Medley Global Macro Managing Director Ben Emons note that Trump’s language toward the talks has become more cautious of late. He’s gone from describing them as “going very well” to saying they are “moving along” to Tuesday’s “could happen soon.” As linguists know, “could” is one of the weaker verbs in the English language because theoretically anything “could” happen. It’s certainly no match for “may.” Emons pointed out in a research note that there was also a softening in Trump’s tone toward the trade talks in April, when the trade hawks gained his ear. The S&P 500 tumbled 6.58% the next month. Some would say this is just semantics, but the ebb and flow of the trade war is the primary driver of markets. The latest monthly survey of global fund managers by Bank of America (NYSE:) released on Tuesday showed that 39% of respondents said it’s the biggest risk facing markets, followed by 16% who fear a bond bubble, 12% who cite monetary policy impotence and 11% who said a slowdown in China is the biggest worry.

So, does Trump’s language suggest there will a repeat of the May episode for stocks? It’s impossible to know, but the stakes are higher. The Bank of America survey shows that allocations to global equities are higher and average cash holdings are lower, falling to the lowest since June 2013 at 4.2% of assets.

NEGATIVE RATES? NO THANKSTrump also took a shot at the Federal Reserve, saying it was hurting the U.S. by not copying other central banks in deploying negative interest rates. On the face of it, getting paid to borrow seems appealing. But that ignores the fact that countries with negative rates have deep economic problems, and many central bankers are finding that they do more harm than good. One of those countries is Japan. Its central bank is actively trying to steepen its yield curve, pushing yields on long-term government bonds back above zero. But instead of worrying what this might do to Japan’s economy, the country’s stock market has been on a tear. The benchmark index is up 15.7% since late August, outperforming the MSCI All-Country World Index, which is up just 8.06% in the same period. The biggest beneficiary of positive rates is the banking system, which is why the Topix bank index has done better, surging 19%. More economists say negative rates don’t really increase borrowing and certainly don’t promote lending. The International Monetary Fund forecast last month that Japan’s economy will expand just 0.9% this year, compared with 2.4% for the U.S. This change in sentiment toward negative rates by central banks is one reason the global government bond market has softened, with yields as measured by the Bloomberg Barclays (LON:) Global Aggregate Treasuries Index having risen from a three-year low of 1.17% on average in early September to 1.48% as of Monday.

COMPLACENCY IS IN THE EYE OF THE BEHOLDERAnother revelation from the Bank of America survey is that fears of a looming global recession have largely vanished. A net 6% of those polled expect a strong economy next year, an increase of 43 percentage points from the October survey and the biggest monthly jump on record. Combine that with the largest allocations toward equities in a year and the declining cash balances, and it’s logical to ask whether investors have become too complacent. The , commonly known as the VIX, is back down to some of its lowest levels of the year, which is to say it’s not far from its record lows. Nicknamed “the fear gauge,” the measure tracks implied volatility in the stock market. The lower it goes, the less “fear” there is perceived to be among investors. But those who say this is a sure sign of complacency fail to acknowledge the expanded role of central banks in markets. It’s no coincidence that the rally in equities that gathered steam in October came as the collective balance-sheet assets of the Fed, European Central Bank, Bank of Japan and Bank of England rose by 0.6 percentage point to 35.7% of their countries’ total gross domestic product in October, according to data compiled by Bloomberg. The increase from September was the most for any month since March 2017. At the same time, a custom index measuring M2 figures for 12 major economies including the U.S., China, euro zone and Japan shows their aggregate money supply surged by $846.1 billion in October, the most since June. Central banks clearly have put a floor under markets, which should reduce volatility.

LATIN AMERICA IS DOWNLatin America is quickly turning into the sick man of emerging markets. The economic problems in Venezuela and Argentina were already well known when protests swept Chile last month. Now there’s strife in Bolivia, resulting in violence, military intervention and the resignation of President Evo Morales, who was granted asylum in Mexico. But that move has caused friction between the U.S. and Mexico, which reversed a pledge not to intervene in affairs of other countries. That may have been a big reason Mexico’s peso sank the most in three months Tuesday, along with a Fox Business report that the U.S. may impose tariffs on autos and auto parts from Mexico. The Bloomberg JPMorgan Latin America Currency Index is down 2.84% since Nov. 1, sliding much further than the 0.43% drop in the MSCI EM Currency Index. On top of that, dollar-denominated bonds issued by borrowers in Latin America have lost 3.25% of their value since early August, according to Bloomberg News’s Paul Wallace. That’s the worst performance among emerging markets, according to JPMorgan Chase (NYSE:) & Co.’s indexes. Of 10 emerging markets with the worst-performing dollar debt in November, half are from Latin America. The IMF last month said it expected the region’s economy to rebound next year, expanding by 1.8% compared with 0.2% this year, but the latest developments rightly have investors questioning whether those forecasts need to be downgraded significantly.

TOO LITTLE TOO LATEThe optimism in recent weeks that perhaps the U.S. and China were on the cusp of some trade detente has provided some support to the long-suffering agriculture market. One raw material that has done especially well is milk. Class III futures, which represent milk used to make cheddar cheese, are up about 45% in 2019 and heading for the best year since 2007. Prices are already the highest since 2014. Alas, the rally wasn’t enough to save top U.S. milk processor Dean Foods Co., which has filed for Chapter 11 bankruptcy protection. Dean says it’s the largest U.S. processor of fresh fluid milk and other dairy products, but the company has been squeezed by fierce competition and shrinking profit margins, according to Bloomberg News’s Lydia Mulvany and Katherine Doherty. This is potentially significant from a political standpoint. Dairy is especially important to Wisconsin, where Dean Foods has operations. It’s a state Trump narrowly won in the last election and one many political scientists say he needs to hold on to if he hopes to win a second term in 2020. But the struggles of such a high-profile agriculture company could have a large number of those voters questioning whether Trump’s trade strategy is the right one for their industry.

TEA LEAVESNow on to Jerome Powell. The Federal Reserve chair begins two days of Congressional testimony on Wednesday, providing lawmakers with an update on where the central bank sees the economy going. It won’t be an easy discussion. Although the U.S. stock market continues to set records, the Federal Reserve Bank of Atlanta’s widely followed GDPNow index, which aims to track the economy in real time, suggests growth of just 1% this quarter. The markets and the economy have clearly diverged. And while there is always the chance for a surprise, Powell will most likely repeat what he said on Oct. 30 after the Fed cut interest rates for the third time since July, which is that monetary policy and the economy are in a good place and that it would require a “material reassessment” of the outlook to justify additional monetary easing.