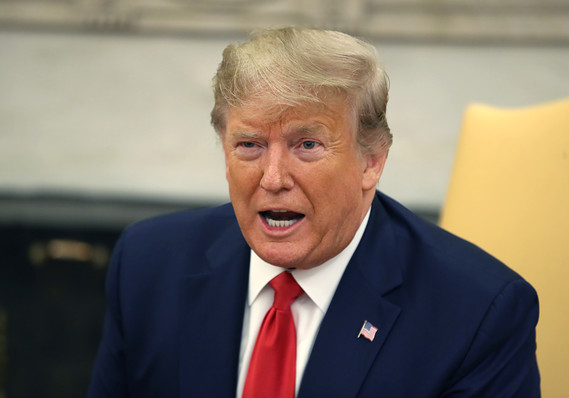 President Donald Trump took aim at the Federal Reserve and touted U.S. job creation in a midday speech Tuesday at the Economic Club of New York, as investors watched the address for possible clues on the direction of a U.S.-China trade deal.

Trump said in his speech at the event that his administration had “exceeded expectations” on the U.S. economy — creating “nearly 7 million new jobs” — and repeated his charge that the Fed has cut interest rates too slowly.

Citing stock-market records, Trump claimed, “if we had a Fed that worked with us, we could have added another 25% to those numbers.”

Equities and other assets have hung on statements from Trump and China about the possibility of a deal, with the president last week disputing Beijing’s assertion that the U.S. and China had agreed to roll back tariffs as part of an interim trade pact.

Yet Trump has frequently described progress with China, saying on Friday “we’re getting along very well,” and that “they want to make a deal.”

The U.S. and China have placed tariffs on billions of dollars’ worth of each others’ goods in a trade fight that has roiled global markets. The next round of U.S. levies on Chinese products is scheduled to go into effect on Dec.15., and covers $156 billion of goods including toys and computers.

The tariff fight has come as officials from the two sides have been negotiating the so-called phase one, or partial, trade agreement. Under that phase, the U.S. aims to have China buy more American agricultural products; beef up intellectual property protections for foreign companies in China; and open China’s financial-services market.

Meanwhile, Trump has said he working to establish a site to meet with his counterpart President Xi Jinping to sign the partial pact.