Home
Market
Airbus says could stretch A220 airliner, but has no current plan to do so
Prev Article Next Article 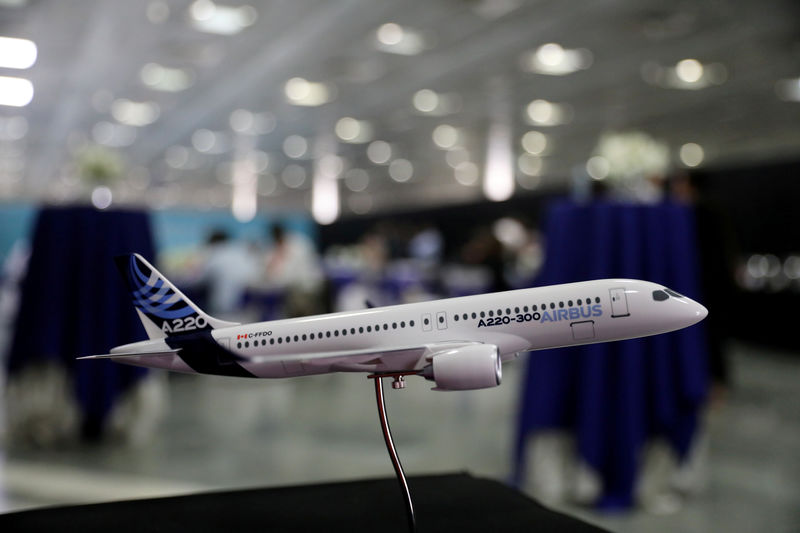 OTTAWA (Reuters) – Airbus SE’s (PA:) Canadian-designed A220 narrowbody jet has the potential to be stretched to carry more passengers but the company has no current plans to do so, a top executive said on Tuesday.

In a presentation to investors, Air France KLM last week posted a slide referring to a larger A220-500 plane.

“It’s no secret that the aircraft has potential to be stretched, potential to grow,” said Philippe Balducchi, head of an Airbus-led venture which took over production of the airliner in July 2018.

Airbus’ first responsibility was to make sure the two existing planes become established in the marketplace, he told Reuters on the sidelines of an aviation conference. After that the firm would decide how to develop its planes.

“Will (there) be an A220-500 or not? I cannot tell you that today. It’s definitely not my priority but there is the potential – we will see,” said Balducchi.

Montreal-based Bombardier (TO:) originally drew up designs for the airliner some 15 years ago but sold Airbus a 50.01 percent stake for a token fee of one Canadian dollar in 2018 after sluggish sales and low production rates pushed the program well over budget.

Balducchi sidestepped questions as to whether Airbus would buy Bombardier’s 33.58% minority stake, saying that was a decision for shareholders.

“I think Airbus is comfortable with the situation today,” said Balducchi.

Under the terms of the 2018 deal, Bombardier could oblige Airbus to acquire its stake in the program in 2026 for market value. Airbus could also oblige Bombardier to sell the stake.

Bombardier Chief Executive Alain Bellemare recently said the company is “looking at all options” regarding its stake, while specifying that such a decision “is not for today.”

The Canadian province of Quebec continues to hold a 16.41% stake in the program.