Home
Market
With trade war as a backdrop, U.S. companies walk a line at China expo
Prev Article Next Article 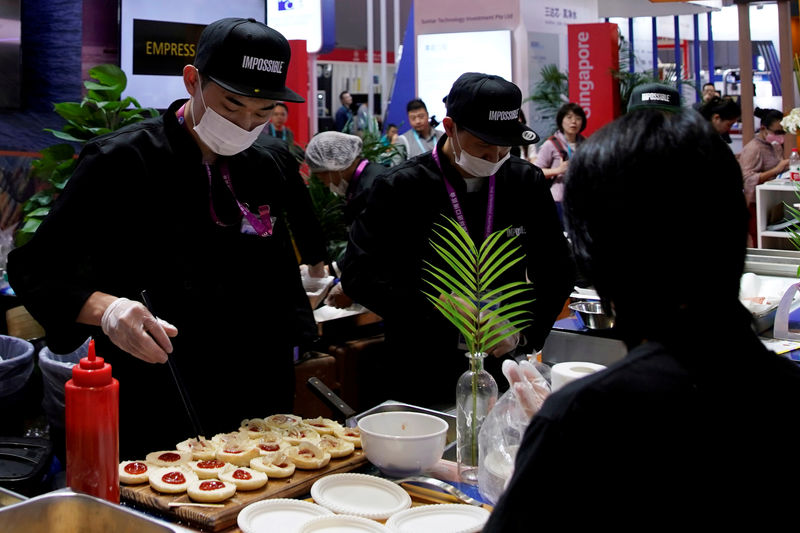 By John Ruwitch and Josh Horwitz

SHANGHAI (Reuters) – At trade shows in the United States, California-based Champion Power Equipment displays the faces of the tough-looking sportsmen that it sponsors against the backdrop of an American flag.

At an import expo in China this week, the images of a pro bass fisherman, lumberjack, bull rider and NASCAR and off-road drivers were there – but the flag was not.

“Even though we’re proud to showcase we’re a U.S. company, there are some things we’ve just tried to … tame it down a little bit,” said Greg Pauken, director of product development at the maker of portable generators and other motorised tools. “Why create any more conflict than you need to?”

U.S. companies are walking a tightrope at the Nov. 5-10 China International Import Expo (CIIE) in Shanghai, with the fate of a preliminary deal between China and the United States to defuse the trade war still up in the air.

Strong backing from Chinese leader Xi Jinping has imbued CIIE with political symbolism unmatched by any other trade show in China.

The U.S. government has made a point of skipping it in the two years it has existed. Several other countries have sent leaders or senior officials, and many are hosting lavish pavilions promoting their nation’s wares.

Nevertheless, more American companies have showed up this year – nearly 200 – than in CIIE’s inaugural year, propelled by enthusiasm about China’s vast market. In some cases, companies also want to support an event that the Chinese government considers highly significant.

Concern was not far from the surface about prospects for business if the trade war drags on and the world’s no. 2 economy continues slipping.

U.S. companies are not yet being stigmatised, according to Stephen Lien, president of the Aerospace Asia Pacific Division at Honeywell International Inc (N:), but such a thing was “certainly possible.”

“We get Chinese customers walking in and talking to us all day long,” he said. “They’re not going to Philips just because we’re an American company and Philips is a European company. There continues to be a lot of interest.”

Nearby, Twiggy Zhao, a representative at the WD-40 Co (O:) booth, said the California-based maker of lubricants was eager to gain traction in the China market but remained “a little bit worried” about trade war fallout.

“We quite want to separate politics and business. I mean, our product is very helpful and useful, so we want people to focus on products,” she said.

On top of trade uncertainty is the perception that political risks have risen, as highlighted by the troubles the National Basketball Association has faced since the Houston Rockets’ general manager tweeted support for Hong Kong’s protests last month.

For Impossible Foods, the developer of plant-based meat substitutes, the risks are outweighed by the prospect of tapping into a huge country reliant on a environment-straining livestock industry.

Founder and chief executive Pat Brown was taking advice on how to walk the line from his brother, a diplomat in China.

“We don’t intend to impose our own ideology on China or anything like that, but we are not going to be shy about talking about our values,” he said.

“We’re not here to tell China how to run its business,” he added. “We’re here to help solve a huge global problem and help China solve its own food security and reduce its environmental impact. We’re completely focused on that.”

Li Fang, president and general manager of Corning Inc’s (N:) greater China operations, said his company’s success here had been aided by government support. Li said attending CIIE for the first time this year was, in part, a gesture of support for China.

The New York-based company has invested more than $7 billion in China – more than half of it since 2015 – and is doing “extremely well,” despite risks, Li said. The impact of the trade war has been “minimal” and Corning plans to continue to invest.

“We still hope the two countries can solve the issue as soon as possible,” Li added.