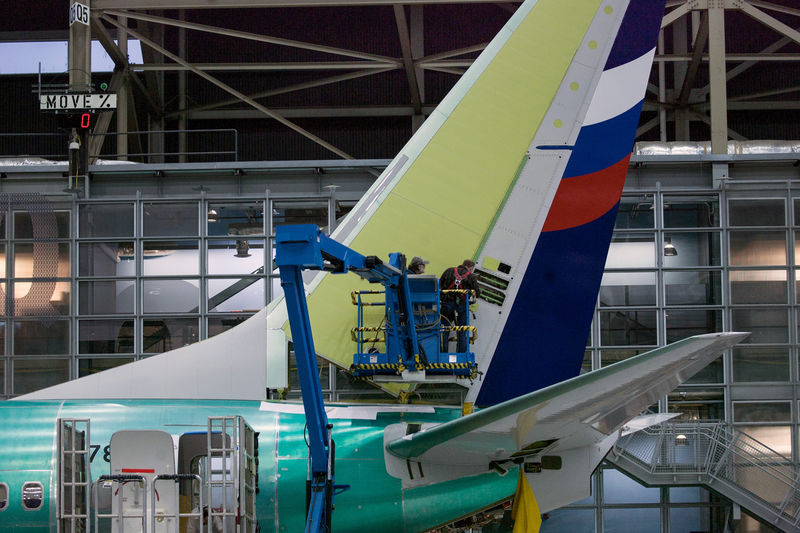 © Reuters. FILE PHOTO: Boeing employees work on the tail of a Boeing 737 NG at the Boeing plant in Renton, Washington

The discovery could make it more likely the FAA will require airline operators to inspect 737 NGs with fewer than 22,600 cycles, which had not been mandated previously. Each cycle typically represents one flight, with a takeoff and a landing.

The cracks are on what is known as the “pickle fork,” a part that attaches the plane’s fuselage, or body, to the wing structure.

An FAA spokesman said the agency had asked operators to report any cracks so it could assess whether it needed to change its inspection orders.

The Lion Air jets with cracks had fewer than 22,000 cycles and are now grounded for repairs, a spokesman for the airline said.

Lion Air performed the checks even though they were not yet required to “ensure security and safety of the flights,” he said.

One of the airline’s newer 737 MAX jets last year crashed shortly after takeoff from Jakarta, killing all 189 people on board and leading to heightened scrutiny on the carrier’s maintenance operations by Indonesia’s safety regulator.

Indonesia’s Director General of Civil Aviation Polana Pramesti said on Friday there were no plans for the country’s aviation regulator to expand the inspections beyond the FAA directive.

Boeing did not respond to an immediate request for comment. The manufacturer last week said that just over 1,000 planes globally had met the threshold for inspections to date, and of those fewer than 5% had issues.

(This story refiles to delete extraneous word from lede)