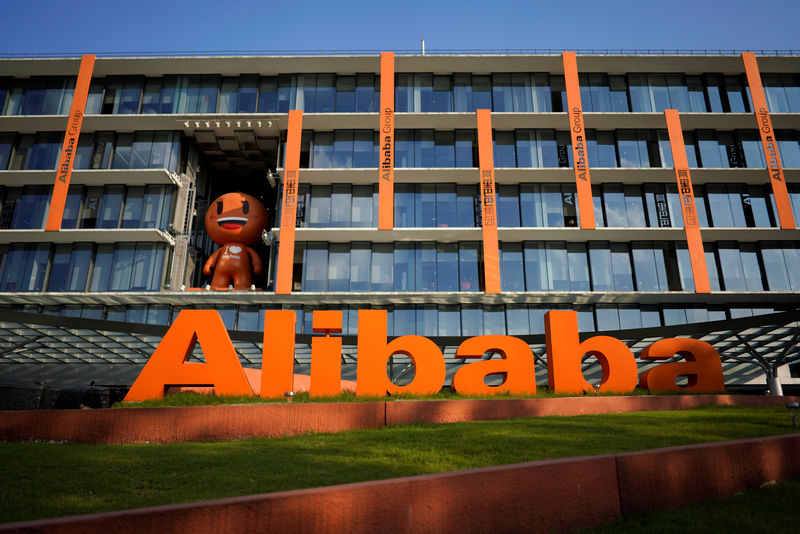 © Reuters. FILE PHOTO: The logo of Alibaba Group is seen at the company’s headquarters in Hangzhou

By Scott Murdoch and Jennifer Hughes

(Reuters) – Chinese retail titan Alibaba (N:) plans to list in Hong Kong in the final week of November, two people with direct knowledge said, aiming to raise up to $15 billion in a deal that signals a vote of confidence in the Asian financial hub.

The public offering by the e-commerce specialist, whose primary listing is in the United States, would take place at a pivotal moment for Hong Kong’s future as the city has been wracked by months of anti-government protests.

It also comes at a time when there has been a thaw in relations between China and the United States, which have been locked in a trade war that has buffeted financial markets.

Alibaba’s bookbuilding and listing is due to take place in the week beginning Nov. 25, said the sources, who declined to be identified due to the sensitivity of the matter.

The company is first due to seek approval from Hong Kong’s listing committee next week, on Thursday, two separate sources with direct knowledge of the matter said.

The transaction would be the world’s biggest-ever cross-border secondary listing, according to Dealogic data. Alibaba currently holds the crown for the world’s biggest initial public offering for its $25 billion 2014 float in New York.

Alibaba has not said what it plans to do with the proceeds of the secondary listing, in which it aims to raise between $10 billion and $15 billion.

However the company is looking to expand its Chinese customer base beyond its core market in big cities to less developed areas to combat slowing retail sales growth.

It also faces rising competition from nimbler rivals such as Pinduoduo (N:) which have outsmarted the retail juggernaut in smaller cities with deep discounts and group-buying deals.

The Hong Kong listing presages a year-end rush for global equity markets, with the Saudi government planning to sell 2% of oil giant Aramco in a deal that could raise up to $30 billion and topple Alibaba’s own IPO record.

If both deals succeed, they could provide a shot in the arm for moribund capital markets, where investors have proved increasingly sceptical of the valuations sought by much-hyped tech start-ups such as ride-hailing giant Uber (K:), which has fallen by about a third since its float in May.

More recently, office-space sharing startup WeWork was forced to drop its IPO plans and seek a cash injection from investor SoftBank Group (T:) as its valuation collapsed to $8 billion from $47 billion.

Companies have sold shares worth $429 billion via IPOs and follow-on sales so far this year – far short of the $604 billion in the whole of 2018, according to data from Refinitiv.

Alibaba had initially been working on an August listing in Hong Kong but put the deal on hold as anti-government protests left the city mired in financial and political uncertainty.

The return of this deal would cap a resurgent market in Hong Kong, where a series of big floats since September have helped the bourse operator, Hong Kong Exchanges & Clearing (HKEX) (HK:), become serious competition once more to the American players.

So far companies in Hong Kong have sold shares worth $22.3 billion via IPOs this year, compared with $24.5 billion on Nasdaq and $22.6 billion via the NYSE, according to Refinitiv data.

Alibaba’s decision in 2013 to drop plans for a primary listing in Hong Kong, and turn instead to New York, triggered passionate debate among bankers and officials, and resulted in rule changes that paved the way for this deal.

Now bankers and investors are watching closely to see whether other U.S.-listed Chinese companies such as Baidu (O:) and JD.com (O:) might follow Alibaba’s lead.

The listing could yet be delayed, however, if the protests worsen once more. The demonstrations are in their fifth month and are frequently violent. The death of a student on Friday who fell from a parking lot is expected to spark fresh protests and fuel anger at police.

Alibaba will next week appoint more banks to help sell its shares in Hong Kong, the sources said.

The deal is currently being led by China International Capital Corp (CICC) and Credit Suisse (SIX:). Major investment banks led by Morgan Stanley (NYSE:) and Goldman Sachs (NYSE:) are currently jockeying for the most senior positions behind those two.

The new timing means the company will have an opportunity to show prospective investors its most recent sales figures after Monday’s Singles Day, mainland China’s largest annual online shopping day.

Alibaba’s sales last year reached $30 billion on the day, which was more than three times as large as Cyber Monday, the equivalent shopping day in the U.S.