Home
Stocks
Apple, Facebook, Google and Amazon are putting billions of dollars toward affordable housing — but that money may be too little, too late
Prev Article Next Article
This post was originally published on this site 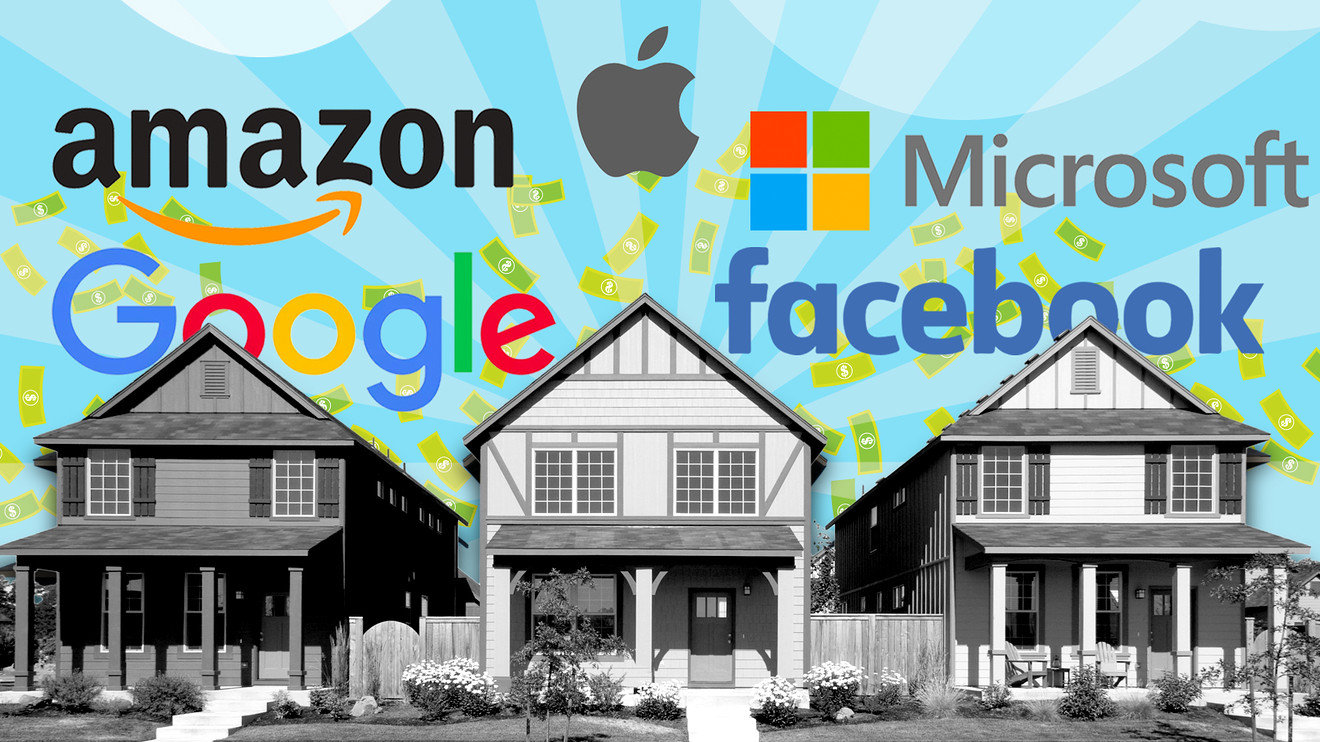 Major tech companies have pledged billions of dollars in recent months toward affordable-housing initiatives in a bid to alleviate the housing crunch in places like San Francisco and Seattle, but some experts say it’s too little, too late.

Apple AAPL, -0.32%  became the latest company to make such a commitment, announcing earlier this week that it had earmarked $2.5 billion for affordable housing projects. This money will go toward a California housing fund and a down payment assistance program. Roughly $300 million of the $2.5 billion pledged is comprised of land Apple owns in San Jose, Calif., which will be made available for housing.

Throughout 2019, many other companies have made similar pledges. Facebook recently FB, +0.88%  announced it would devote $1 billion to affordable housing efforts, while Google GOOGL, +0.57%  said it would put $1 billion toward building more homes in Silicon Valley in June. Meanwhile, Amazon AMZN, -0.23%  and Microsoft MSFT, +0.26%  have both said they would funnel funds toward housing initiatives in Seattle, where they are headquartered MSFT, +0.26%. Amazon has also contributed to organizations that support homeless people in Northern Virginia, the site of its second headquarters.

Don’t miss: This one chart shows how crazy Amazon is making the Northern Virginia housing market

This is not the first time these companies have put money toward housing, though it may be the largest showing yet. Facebook began addressing housing issues near its headquarters in 2017 through the $75 million Catalyst Housing Fund, which provides money for teacher housing, an affordable housing preservation fund, and support for tenant legal services, Menke Sethi, Facebook’s director of location strategy and site optimization, said in an emailed statement to MarketWatch.

(Microsoft declined to comment on the story. Google and Apple did not immediately return requests for comment.)

Putting money toward the construction of homes meant for middle-income households is a positive development in these regions that have seen home prices skyrocket in recent years, but some experts argue that these efforts are insufficient and ill-timed.

“It may be too little, too late because of the time it takes to actually build more inventory,” said Daren Blomquist, vice president of market economics at real-estate marketplace Auction.com. “Even if ground was broken tomorrow on the new affordable housing being promised, that housing wouldn’t likely be available for at least another year, if not more. Meanwhile, free market forces are already at work to correct the imbalance between supply and demand.”

Tech companies are partly responsible for the affordability crisis

The problems in the San Francisco Bay Area, Silicon Valley and Seattle are largely the byproduct of the tech industry’s success.

A study published earlier this year by Zillow ZG, +11.27%  suggested that tech IPOs may have caused home prices to jump in some areas. Researchers studied the Facebook IPO and found that for every 10 Facebook employees living in a given U.S. Census tract at the time of the IPO, an extra 1.6-percentage-point increase in home values occurred over the following year.

But it’s not just the large workforces — and higher-than-average salaries — of the major tech companies alone that are driving the housing crunch in these cities. “Google’s only one quarter of our employment in Mountain View,” said Lenny Siegel, the former mayor of Mountain View, Calif., where Google is headquartered. “Tech here isn’t just the giants everybody sees on their screens.”

The major tech firms have attracted scores of smaller companies to these regions — companies that want to do business with their larger competitors while also taking advantage of the pool of talent those companies draw.

At the same time, home construction has not kept pace with the burgeoning demand for homes in these areas. This, too, is a self-inflicted wound, according to Ed Pinto, director of the American Enterprise Institute Housing Center, a conservative-leaning think tank based in Washington, D.C.

“These areas have suffocating regulatory environments,” Pinto said. “There are plenty of fast-growing areas like Raleigh, Charlotte and Austin that have orders of magnitude more construction than these places in California.”

In San Jose, where the population is about 1.035 million people, the city has issued only 1,301 permits for residential buildings in the first half of this year, only 134 of which were for affordable housing, according to George Ratiu, senior economist at Realtor.com.

“At this pace, the 20,000 units envisioned by Facebook will take years to complete,” he said.

(Realtor.com is operated by News Corp NWSA, -3.49%   subsidiary Move Inc., and MarketWatch is a unit of Dow Jones, which is also a subsidiary of News Corp.)

As home prices have reached new heights across the Golden State, people have been leaving in droves in search of more affordable housing. Workers are leaving California for cities like Austin, Texas and Charlotte, N.C., where thousands more homes are being built that can be bought for a fraction of the price.

“It’s certainly in the best interest of some companies to invest in affordable housing as it will help them retain the workers they need for continued growth and productivity,” Blomquist said. “These recent announcements show that companies are coming around to this realization, and I would guess that we will see more of these types of announcements going forward.”

How tech companies could better address affordable housing — beyond money

Putting money into the construction of new homes — and more importantly setting aside land for this, as many of the companies have done — is a start toward addressing the issues in these housing markets. But the companies themselves recognize more is needed.

“The truth is that we need tech companies and businesses involved in promoting long-term solutions, but they aren’t the only partners we need,” Facebook’s Sethi said. “To truly advance our goals, and address the problems at the heart of this crisis, we need all businesses, community members, and groups at the table — working together.”

And having the private sector become too involved in the supply of housing isn’t necessarily ideal either. Pinto argued that the commitments these companies are making could actually function to raise home prices in these housing markets in the long run, similar to how health costs have increased in part because employers subsidize health insurance for their workers, he said.

Similarly, it would not benefit communities to become too reliant on specific companies for their housing needs. “We have a historical record of ‘company towns’ which were developed solely by companies to offer worker housing, and which proved to be less-than-ideal solutions to the problem,” Ratiu at Realtor.com said.

What’s sorely needed is action on the part of policymakers to address zoning and building regulations, which have impeded developers’ ability to build new homes, Pinto said. To that end, some housing industry experts argued that the tech companies could work to exert more pressure on state and local lawmakers to loosen these regulations. “The companies need to stand up and be vocal and say, ‘Unless you get this fixed, we’re going to leave,’” Pinto said.

The companies could also stand to become more proactive in their approach toward housing, rather than reactive. Siegel pointed to LinkedIn as an example of this. Mountain View requires office developers to pay a fee that supports affordable-housing initiatives in the city. But when LinkedIn was in the process of announcing its plans for expanding its headquarters, the company made that money available two years in advance of when it actually began work on the expansion.

“The housing trust made that money available to affordable-housing developers so they could buy that land early before land prices went up,” Siegel said.