Home
Stocks
Need to Know: These ‘all-terrain’ stocks are vital for investors when the world comes unglued
Prev Article Next Article
This post was originally published on this site

Markets continue to hang on every word of Beijing-U.S. trade developments, with a report the U.S. and China have agreed to cancel tariffs on each other in phases setting up a bullish Thursday for stocks.

The truth is, no one wants to even entertain the idea that a big deal will never get done, something that could trigger a global recession and bring the bull market to its knees. With that in mind, it’s worth checking out our call of the day from Investment Management Associates’s CEO and chief investment officer Vitaliy Katsenelson, who has said that investors need an “all-terrain” portfolio now more than ever.

Speaking to financial media group Real Vision, Katsenelson laid out some big worries in the road ahead for investors — an “enormous” China bubble, a sluggish global macro picture and high valuations for U.S. stocks that hark back to the crash years of 1999 and 1929.

“How does one construct a portfolio for that? You basically want to own companies as if things hit the fan,” he said. That is, high quality companies with “significant competitive advantage, high recurrence of revenue, very little debt,” and whose business isn’t tied to the economy’s health.

For example, Katsenelson said the portfolio has lots of exposure to health-care stocks because of rising demand for the services of those companies, which offer predictable cash flows, pricing power and solid balance sheets. As a value investor — someone who looks for assets that seem underpriced — he said health care fits the bill right now.

The ultimate safe-haven asset, gold, is not in that all-terrain portfolio, but he said they’re warming up to it as they try to figure out the best way to invest. “We are in the world where you have negative interest rates so suddenly, gold does not sound as crazy anymore,” said Katsenelson. More on his “all-terrain” portfolio in this podcast.

Opinion: A potential $70 billion Walgreens buyout may mean the end of the stock rally

Just in case you slept through that tariff headline and stock futures move, our chart from The Daily Shot brings that moment alive: 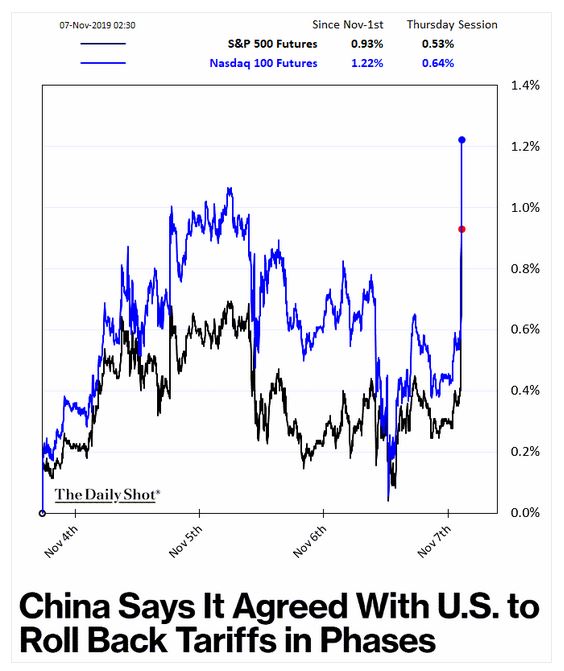 Two former employees of social media platform Twitter TWTR, -0.91% have been accused of spying for Saudi Arabia. Twitter acknowledged that it cooperated in the criminal investigation.

The board of Google parent Alphabet GOOGL, -0.03%  has opened a probe into charges of sexual harassment and misconduct by executives. Alphabet confirmed the news in a statement to MarketWatch.

On the data front, we’ll get jobless claims and consumer credit numbers.