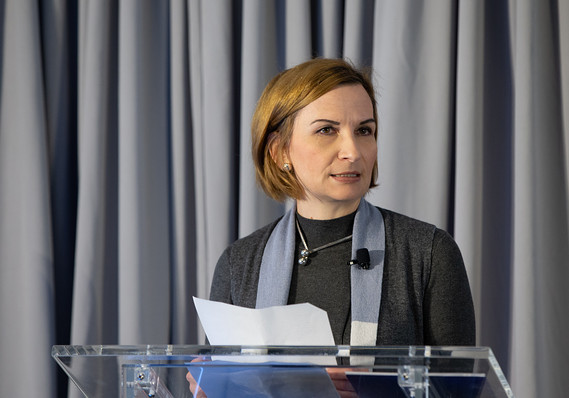 The U.S. banking system is safer and healthier than it was a decade ago, before the 2008 financial crisis, but every so often, there is a hiccup or two.

When trillions of dollars are sloshing around the U.S. and beyond every day, the financial plumbing that supports all those ATMs and home equity loans can get clogged or spring a leak.

Jelena McWilliams is one of the people responsible for that plumbing. As chair of the Federal Deposit Insurance Corporation since mid-2018, she runs the government agency established in the wake of the Great Depression in the 1930s to make sure consumers were protected from bank failures. She had earlier worked in private law practice, as a lawyer for the Federal Reserve Board of Governors, and as counsel for U.S. Senate banking committees.

The FDIC doesn’t just regulate banks. It also insures deposits and makes sure that when banks do fail, they are wound down or sold in an orderly process. So far this year, only four banks have failed; in 2018 none did.

Recently though the issues on McWilliams’s plate have not been as black and white as closing down a bank. In September, in the short term money markets where financial institutions use repurchase agreements to fund assets, overnight lending rates between banks to briefly spiked above 10% as the ”repo” market seized up. The Federal Reserve had to step in to provide liquidity, and weeks later, many financial market-watchers still aren’t sure exactly what happened.

MarketWatch spoke with McWilliams about the repo market, the move away from the LIBOR lending benchmark, how the challenges for farms are weighing on banks, and more. A lightly edited transcript follows.

Can we talk about the recent flareup in the repo market? What happened? I have a colleague who says when something like that happens, the market is trying to tell us something.

Yes. (Laughs.) The irony of this is, I have met with large bank CEOs that are in the market and are sitting on, frankly, a trillion plus dollars of cash. I’m wondering why exactly, why didn’t they go into the marketplace, recognizing there was a shortfall and they could have made money. So we are meeting now with their treasurers and chief risk officers to understand exactly the reasons why. If it’s regulations, we need to make sure we understand. If they are holding on to money —cash — and U.S. Treasurys because our rules require them to, and that’s causing liquidity not to be in the marketplace, we should fix that. Because you want a liquid marketplace and it’s supposed to work seamlessly, right? We’re not sure actually that’s the largest component of what happened but once we’re done talking to all the large banks we’ll have a better sense.

We’re also taking a look at whether there was a market inefficiency that we just could not have foreseen or have not been able to address. So we talked to the New York Fed and we talked to the Federal Reserve Board. I don’t have a great answer for you just yet. If it’s the regulations we need to address it, or is it a combination of regulations and banks just being uncomfortable unloading cash this late in the recovery cycle.

You want a liquid marketplace and it’s supposed to work seamlessly, right?

So as we come into the year-end do we need to be worried about cash management at banks?

Given what happened in September, I think generally the treasurers and controllers at the institutions are a little more cognizant of what happened. From our perspective, the question for the banks is, you could have got 10% and you didn’t. So does that say there was market discipline because you didn’t, or does it say you have concerns we should know about?

And you’ll be reporting out?

I don’t know that we’ll be reporting out. Some of it is supervisory information that we get from banks, but to the extent they think it’s a regulatory issue, that will come up. I just don’t want to overpromise.

(The London Interbank Offered Rate or LIBOR is currently the benchmark for over US$350 trillion in financial contracts worldwide, but is slated for replacement in 2021, though finding a substitute is a challenge for banks, companies and investors).

We’re looking at our banks, making sure that they don’t originate new loans. They’re still originating new loans based on LIBOR. Not just our banks, all banks. I think the banks in particular are uncertain exactly what the new rate will be. They’re in this limbo right now where the regulators said, LIBOR is not the best because of the events of the past. But from the FDIC’s perspective we specifically have not endorsed any rate, we said whichever rate you use, make sure you manage the risk associated with that rate appropriately.

Would you tell me how you assess the commercial real estate sector. There’s been some concerns about the ripple effects from the WeWork problems. How do you think about that?

The FDIC is the primary federal regulator for community banks. We have a handful of banks that are above $50 billion (in assets) but most are below. A lot of those banks are going to be playing in more or less local real estate, commercial and residential. So as we look at different markets, we want to assess exactly what is the impact on the banks that are active in that marketplace.

Regarding commercial real estate we tell them, we are pretty late in the economy recovery, and make sure you manage your portfolio accordingly. It’s a little bit too late — too much risk is always bad — but it’s a little bit too late in that recovery cycle to be taking on risk that you don’t know how you’re going to manage if things go south. So we want to make sure they are prudently underwriting those loans. We try to understand actually what is both the direct exposure by the banks and indirect exposure to the banks as they sell the loans into the marketplace, including who’s holding them so we can understand what is the broader economic exposure if there’s a downturn in the economy and prices start going down.

Generally things are looking good and I am joking that I am afraid that in my five year tenure I will long for the days when I say “community banks are doing very well.” But we have not had any concerns thus far.

Other than the quarterly banking profile, what is the one indicator or data point that you keep an eye on?

I talk to my regional office directors every month. It’s not that I have a single indicator. In the middle of the country it may be agricultural loans. In New York it may be commercial real estate. In Silicon Valley it may be, how are the non-banks competing with the banks and what kind of loans are banks making to make sure they’re competitive with non-banks in that space? Each of them will give me a slightly different sense of what their marketplace is doing and how banks are trying to adjust to other competition.

So I would say, I don’t know that I have a single thing that keeps me up at night. Cyber-security is always a big issue for everybody but in terms of lending and activity in general, I would say we have six regions and each of them has banks that do a little bit different stuff and so we want to know exactly in that region what the biggest trigger is and understanding how the trigger is moving over time.

Read next: Four years, $13 million and dozens of hands: How ‘affordable housing’ gets made in America

How are you thinking about the farm sector? Is it fair to say it’s something you’re keeping a careful eye on?

We are, yes, absolutely. And here’s why. A lot of these banks that are doing agricultural lending in the middle of the country are usually more concentrated in that space. So even small oscillations in pricing could have a big impact on them. That’s why we’re carefully monitoring it. There are two main things we’re looking at: they went from being net depositors to net borrowers as commodities prices have changed. And we’re looking at where farmland prices are, because in a lot of cases they’re using their equity in the farmland to get new tools, or refinance existing loans, et cetera.