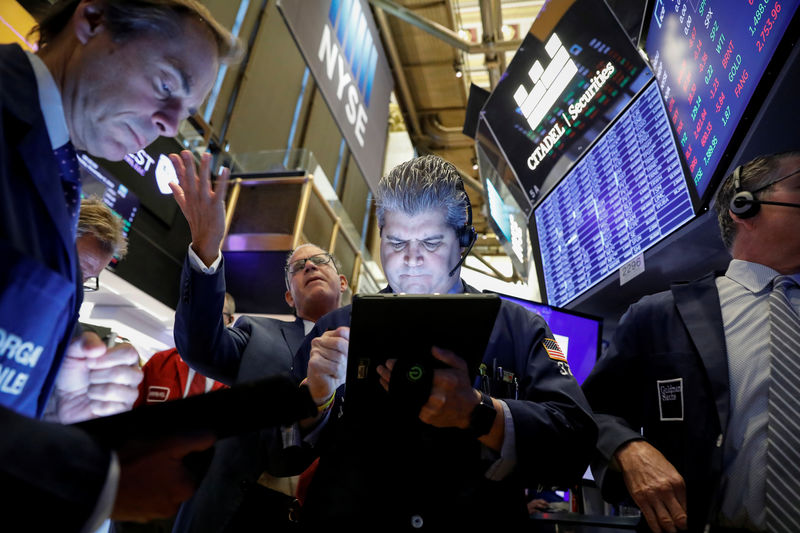 NEW YORK (Reuters) – The Dow and S&P 500 notched record closing highs on Thursday as the latest signs of progress in U.S.-China trade relations relieved investors, but a report raising fresh worries about the outlook for a deal limited the day’s gains.

China said it had agreed with the United States to remove tariffs in phases, while state-owned Xinhua News Agency said Beijing was also considering removing restrictions on poultry imports.

But indexes pared gains in afternoon trading after a Reuters report, citing sources, said that the White House’s plan to roll back China tariffs faces internal opposition and that no final decision has been made yet.

An interim U.S.-China trade deal is expected to include a U.S. pledge to scrap tariffs scheduled for Dec. 15.

“Any kind of uncertainty there, with the market at all-time highs, and it’s easy for traders and institutions to press the sell button and take some money off the table,” said Alan Lancz, president, Alan B. Lancz & Associates Inc, an investment advisory firm, based in Toledo, Ohio.

The latest batch of earnings offered some upbeat news.

The S&P 500 technology index () ended up 0.7%, with shares of Qualcomm Inc (O:) up 6.3% after it forecast current-quarter profit above analysts’ estimates.

Together with Qualcomm, other chipmakers, which have a sizeable exposure to China, also rose, propping the Philadelphia Semiconductor index () up 0.7%.

The trade-sensitive industrials sector () finished up 0.2%.

The day’s gains resumed the recent record run for stocks, which have been bolstered, along with trade deal hopes, by some upbeat earnings.

“Corporate earnings, while down year over year, are better than many had expected, and that’s a plus,” said Oliver Pursche, chief market strategist of Bruderman Asset Management in New York.

Also on Thursday, Ralph Lauren Corp (N:) surged 14.7% after it topped second-quarter profit expectations, helped by a tighter control on expenses and strong demand for its Polo shirts and tweed jackets in China and Europe.

On the down side, Expedia Group Inc (O:) plunged 27.4% as the online travel booking company missed quarterly profit estimates.

Declining issues outnumbered advancing ones on the NYSE by a 1.06-to-1 ratio; on Nasdaq, a 1.09-to-1 ratio favored advancers.

Volume on U.S. exchanges was 7.92 billion shares, compared with the 6.83 billion-share average for the full session over the last 20 trading days.