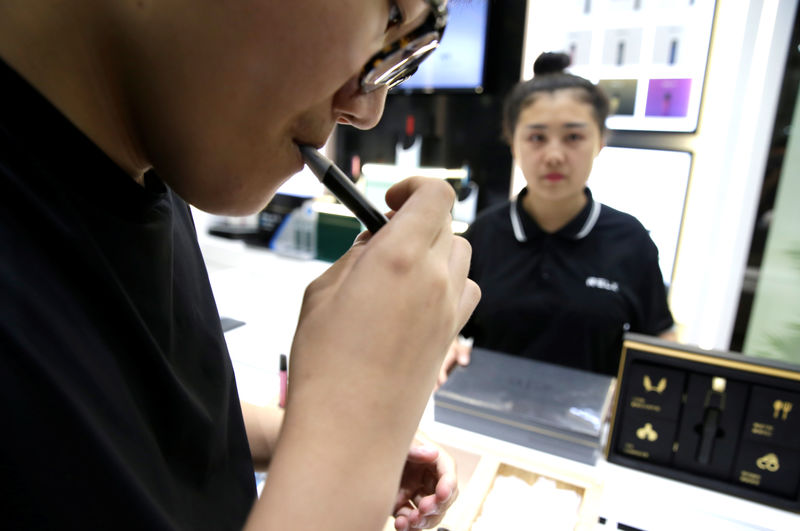 (Reuters) – In a glass-walled laboratory, chemists puff on vaping devices as they test liquid nicotine flavors. Nearby, staffers with cartons of instant noodles on their desks tap away at laptops, messaging suppliers and customers.

Here at the Shenzhen offices of e-cigarette start-up RELX Technology, workers scramble to keep pace with the rush of firms vying for sales in the world’s biggest tobacco market. Their potential-customer base starts with 300 million Chinese smokers of traditional cigarettes – about nine times the number in the United States. Founded by former employees of Didi Chuxing, China’s answer to Uber (NYSE:), RELX aims to become China’s answer to Juul Labs Inc, the San Francisco startup that captured a huge share of the U.S. vaping market with a sleek and addictive e-cigarette.

RELX makes an almost identical product: a stick-shaped device that burns high-nicotine liquids packaged in plug-in “pods.” But it won’t have to compete with the U.S. e-cigarette giant. Juul has yet to crack China’s market even as it aggressively expands elsewhere in Asia and faces a regulatory crisis in the United States https://www.reuters.com/investigates/special-report/juul-ecigarette over a surge in youth vaping. Juul’s delayed entry into China – potentially its most lucrative market – underscores the complexity and risk of operating here.

E-cigarette sales have grown slowly in China compared to other industrialized nations. Its market is about one-ninth the size of the United States, according to market research firm Euromonitor. One main reason: China Tobacco, which is both the government-owned cigarette company and the national tobacco regulator. The state monopoly has not clearly signaled how it will regulate e-cigarettes – or whether it will sell them. If it does, it has the power to regulate its competitors out of the business.

One investor in a Chinese e-cigarette startup likened the combined regulatory and competitive threat to “a knife on the neck.”

China Tobacco did not respond to written questions from Reuters.

The cigarette giant’s power stems in part from its contribution to the national purse – accounting for 5.45% of China’s tax revenue in 2018. That amounts to 10.8 trillion yuan ($1.5 trillion), according to calculations by Professor Rose Zheng of the University of International Business and Economics in Beijing.

Still, China Tobacco sells cigarettes for a fraction of what they cost in most nations – as little as 3 yuan per pack, or less than half a U.S. dollar. RELX sells a device and one pod for between 299 yuan to 399 yuan.

Foreign firms, particularly U.S. firms, face the additional obstacles of the U.S.-China trade war, cultural challenges in marketing and distributing, and competition from a host of new Chinese e-cigarette startups including RELX, which was valued at $2.4 billion based on recent investments.

In September, Juul briefly started selling devices on two popular online commerce sites, Tmall and JD.com Inc. But the products were pulled from the websites days later for unknown reasons.

RELX CEO Kate Wang said she’s “not worried” about the government’s impact on the sector. The products will continue to remain available, she said, “as long as there’s proof that this is a good solution for smokers.”

“The old box-style models, you could sell for $100,” compared to about $30 for a Juul-like device, Gao said. “So everyone had doubts about the pod model.”

Juul’s success quelled those doubts. Dozens of Chinese startups released pod-style vapes starting in 2018. Many had roots in China’s technology industry. Shenzhen-based Laan, for instance, was founded by former employees at WeChat, the messaging app owned by Tencent. YOOZ, based in Beijing, was launched by Cai Yuedong, an online media entrepreneur.

Samuel Liu, who launched the Evove brand of e-cigarettes, envisions a mass market. “It’s a legal drug; it’s a fast-moving consumer good; and it’s an electronic product,” he said. “Electronic cigarettes will be the second item you carry in your pocket, after your phone.”

And yet Liu and others acknowledge the risk posed by China Tobacco.

“When VC’s come to me, I always tell them they shouldn’t get too excited,” he said. “You don’t know when the government will come in and just claim this market for itself.”

Some VCs are embracing the risk. In April, RELX closed on $75 million in venture capital funding from high-profile investors including Sequoia China and Yuri Milner.

In addition to e-commerce sites, RELX sells its products through bars, cafes and smartphone repair shops, and says it has more than 900 branded storefronts as franchise partners. The company also plans to soon open flagship stores in Southeast Asia and London.

The company’s most popular flavors are mung bean, a common ingredient in Chinese desserts, and laobinggun, a type of popsicle popular in the nineties in China.

“We search for flavors that are pretty familiar to people over 30, things that are old-fashioned and inspire emotion,” says Wang.

The administration has at times worked against efforts to limit smoking. In Hangzhou, for example, the local government in 2018 attempted to ban indoor public smoking. The movement lost momentum after the tobacco administration pushed for lighter measures including more designated smoking areas, which it said allowed for “civilized smoking” in a statement to Reuters at the time.

In May 2017, the regulator claimed jurisdiction over heat-not-burn smoking devices – an alternative type of e-cigarette that creates a vapor from raw tobacco leaves. The decision effectively barred Phillip Morris International Inc from Chinese sales of its IQOS device, a heat-not-burn e-cigarette popular in Japan. China Tobacco subsidiaries have since begun testing their own heat-not-burn devices and selling them in limited quantities.

Phillip Morris said in a statement it had no current plans to sell IQOS in China but did not comment on the nation’s regulation of the heat-not-burn sector.

The government has sent conflicting messages on whether it intends to regulate e-cigarettes that vaporize liquid nicotine blends – or sell them itself.

In March, state broadcaster CCTV aired a segment highlighting the potential health risks from inhaling nicotine and other chemicals in e-cigarette liquids. The spot was part of a program – broadcast annually on China’s national “Consumer Day” – that targets industries the government alleges have wronged the public.

Industry players say they struggled to interpret the government’s message in the segment. They hoped it signaled that the tobacco monopoly would continue allowing e-cigarette sales but start regulating their quality and safety. They had the same hopes in May, when a government regulator submitted draft regulations for exported Chinese e-cigarettes to the World Trade Organization.

Many industry observers, however, continue to believe China Tobacco will eventually enter the e-cigarette market itself.

State-owned enterprises such as China Tobacco are “bloated and slow to take action,” said Maggie Chen of ESun, a Shenzhen-based consulting firm that helps companies comply with import and export regulations. “But they are definitely paying attention to this sector.”