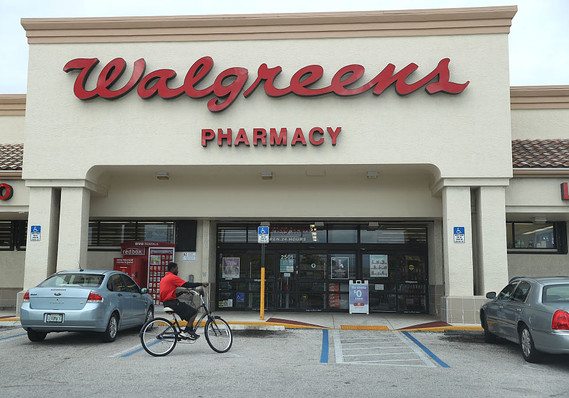 If investors ever needed a clear signal that this is the top of the market, they now have one.

Walgreens Boots Alliance shares surged Wednesday after speculation that the U.S.-listed drugstore group has been considering a $70 billion take-private deal.

If private equity can pull it off, it would be the biggest-ever leveraged buyout, dwarfing the $45 billion take-private transaction of energy group TXU in 2007, which occurred just a year before the financial crisis rocked global markets and prompted unprecedented intervention by global central banks.

Financing a buyout deal of the scale of Walgreens this time around will be a big challenge.

For one, Walgreens WBA, -2.92% already has $15 billion of debt on its balance sheet. A potential bidder would need to add more leverage to fund the purchase. That would leave the drug retailer particularly vulnerable when the credit cycle turns — which is looking increasingly likely.

Factor in a premium and the total cash needed becomes quite dizzying.

All this at a time when risky corporate loans are rapidly piling up on the books of Wall Street.

The volume of leveraged loans has reached $3.4 trillion world-wide, according to estimates from the Bank of England. Credit quality has deteriorated, with most new leveraged loans being issued by companies that have high debt compared with their earnings.

Worse, the share of new leveraged loans with no maintenance covenants—requiring the borrower to maintain certain financial buffers such as a ratio of debt-to-Ebitda, or earnings before interest, tax, depreciation and amortization, of less than 5 times—has tripled since 2007, the U.K. central bank said.

But after an underwhelming reaction from the market, the banks had to restructure the debt package to make it more palatable to investors. This included raising the pricing on the loans and tightening the covenants.

Secondly, Walgreens finances aren’t looking too good. The company’s profit in the fourth quarter plunged 55% to $677 million, compared with the same quarter in 2018.

Margins are under increasing pressure as the price Walgreens pays for generic drugs continues to fall, but not as fast as the amount customers pay.

Walgreens is even more exposed than its competitors to pricing demands because it doesn’t own pharmacy-benefit managers who play an outsize role in drug pricing.

On top of all that, the timing for such a behemoth transaction couldn’t be worse, with political resistance almost a certainty. Private-equity groups are under intense scrutiny from Democratic presidential candidates, with Sen. Elizabeth Warren calling for greater federal regulation of the industry.

She has compared buyout firms with vampires, saying they are “bleeding the company dry and walking away enriched even as the company succumbs.”

The debt-fueled buyout of TXU also took place in an overheated private-equity market.

When KKR and TPG bought the Texas utility they were betting that natural gas prices would rise. But the two buyout firms failed to anticipate the economic crisis that would reduce power demand and the technological revolution around shale that depressed the prices they could pay for electricity.

As the price of natural gas fall sharply, the buyout groups struggled to service the huge debt load it had taken on to finance the acquisition, and the utility eventually filed for bankruptcy.

Read now: ‘This will end poorly’, says J.P. Morgan strategist about a boom in arcane debt on Wall Street