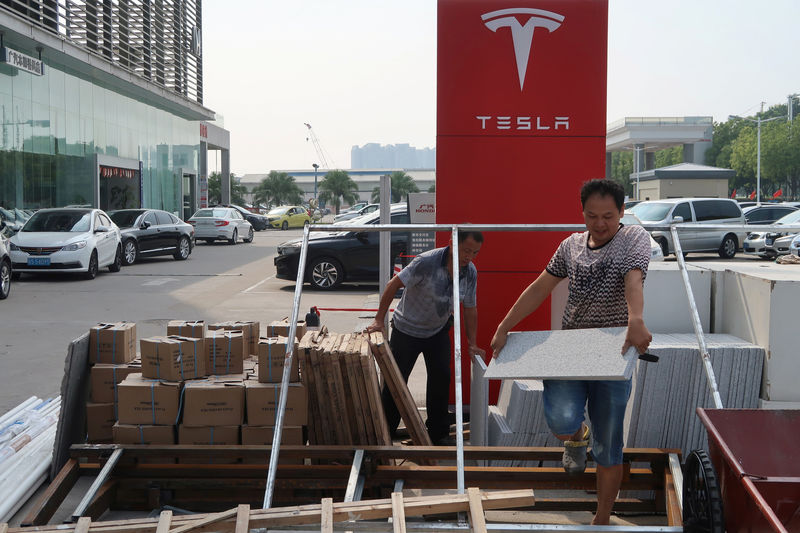 By Yilei Sun and Brenda Goh

SHANGHAI (Reuters) – Tesla Inc (O:) plans to double the number of repair and maintenance shops, add about 100 charging stations and revamp showrooms in China as the electric vehicle maker gears up to open its Shanghai plant.

The moves mark a departure from the approach chief executive Elon Musk announced in March, when he said the company would shut many of its retail stores worldwide to cut costs.

“Building cars from the Shanghai factory is just the first step,” Tesla vice president Tao Lin said at an industry conference last month in Beijing. “Next we must deliver cars very well to our customers and provide very good after-sales service.

Tesla plans to turn some of its showrooms in China into one-stop shops called “Tesla Centers” that also serve as delivery sites and offer maintenance support, two sources familiar with the matter said.

The sources, who spoke on condition of anonymity because they were not authorized to speak to the media, said the rollout would start in Shanghai and Guangzhou.

In coming months, the company also plans to double its service centers to 63 from 29 and boost fast charging stations by 39% to 362, according to Tesla planning documents seen by Reuters.

“There is growing sales potential from more inland cities, and a need to prepare for growing repair and maintenance demands to avoid complaints,” one of the sources said.

The sources cautioned that plans might change depending on the circumstances.

Tesla’s corporate headquarters in the United States did not respond to a Reuters request for comment.

Its efforts to boost its physical presence in China comes as the carmaker has started trial production at the $2 billion Shanghai plant, its first overseas factory, ahead of mass production by the end of December.

Tesla has said it should be able to build 3,000 Model 3 sedans a week in its initial phases. That is nearly four times the number of imported Model 3 vehicles sold in China per month this year, according to figures from research firm LMC Automotive.

The expansion plan is likely to increase financial strain on Tesla, which has been burning cash because of heavy losses and capital expenditure.

It was not immediately clear how much Tesla would need to spend to expand its sales and after-sales network in China.

Tesla operates about 48 showrooms in mainland China. In contrast, BMW (DE:), Daimler’s (DE:) Mercedes Benz, and Audi (DE:), which will have electric sport-utility vehicle models in China by the end of this year, all have more than 500 sales outlets there.

Although Tesla might not need to have as many showrooms as its rivals, it should have more than it currently does, experts said.

Maintaining growth momentum in China has become even more crucial to Tesla, as its U.S. revenue tumbled 39% in the third quarter, its first decline in more than two years. By contrast, sales in China rose 64% to $669 million.

Tesla is also expanding its sales and delivery workforce in China: It has held several hiring events in Shanghai, Beijing and Shenzhen for sales and delivery staff in recent months, according to recruitment advertisements posted on social media.

At a Tesla service center in Beijing, customers said more maintenance and charging facilities would encourage them to drive farther.

“It is definitely good thing. If it is convenient enough, I will drive my car to more cities,” said Niu Siliang, a 60-year-old retired man who owns a Model X SUV.