Home
Market
South Africa's Ramaphosa gets $13.5 billion of investment pledges at summit
Prev Article Next Article
This post was originally published on this sitehttps://i-invdn-com.akamaized.net/trkd-images/LYNXMPEFA512S_L.jpg 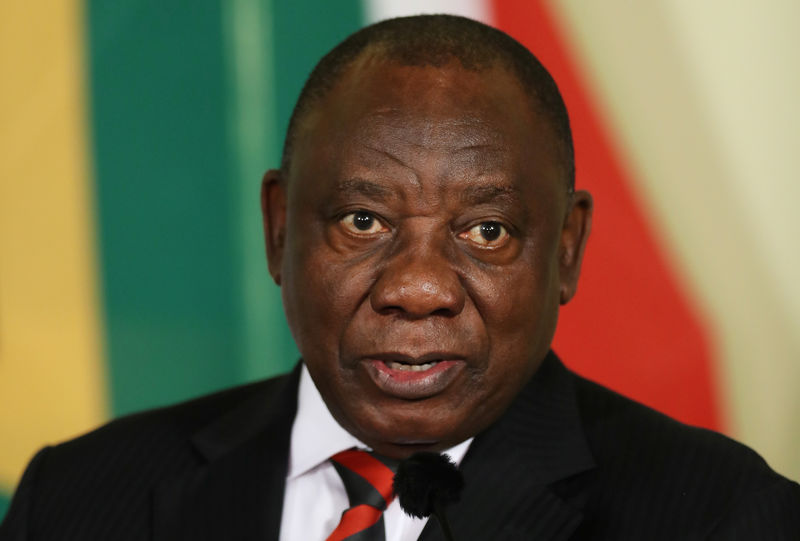 Ramaphosa announced the investments during his opening speech at a forum aimed at drawing sorely-needed direct investment into the economy.

“The new investments over five years are with the view of addressing low economic growth and reducing unemployment,” Ramaphosa said. “It is pleasing to see that investors still consider South Africa as a country that has much to offer.”

At last year’s forum, Ramaphosa had set a goal of attracting $100 billion of new investments over a five-year period and he quickly secured more than half that amount in pledges.

But many of those promises are yet to translate into projects that could make a meaningful indent in the country’s 29% unemployment rate or lift the growth rate above last year’s level of 0.8%.

The scale of the challenge Ramaphosa faces was underlined by Finance Minister Tito Mboweni’s bleak medium-term budget speech last week, which slashed this year’s growth forecast to 0.5% and showed government debt would shoot up to more than 70% of gross domestic product by 2023.

Moody’s placed South Africa’s last investment-grade credit rating on a “negative outlook” after Mboweni’s updated budget projections, giving the country up to 18 months when it could be downgraded.

A downgrade could trigger billions of dollars of outflows from South African government debt.

Domestic firms like telecoms firm MTN (J:) and paper company Sappi (J:) made some of the largest pledges at Wednesday’s conference, with other large investments promised by state freight company Transnet and the state airports management company.

The new pledges would be a “shot in the arm” to the local economy, Ramaphosa said.

Ramaphosa has promised reforms from the energy to telecoms sectors, but progress has been slow due to opposition from labor unions and parts of his ruling African National Congress party.

His investment conference last year secured nearly 300 billion rand of investment pledges from firms like miner Anglo American (L:). During that conference, countries including China, Saudi Arabia and the United Arab Emirates made a further $35 billion in pledges.

Ramaphosa said on Wednesday that a new chief executive and revamped board of directors at struggling state power firm Eskom would be announced “in the next few days” and promised that his government would continue to improve the ease of doing business.