Wall Street banks say traders might want to take another shot at a bond-market strategy that has repeatedly frustrated those who have tried it this year.

Some stabilization in recent economic data after this year’s slowdown, helped by progress on a U.S.-China partial trade deal, has encouraged some market participants to once again bet on the gap between short-term and long-term bond yields widening. Market participants could position for this eventuality by placing so-called yield curve steepener trades, simultaneously buying up short-end maturities and shorting their long-end counterparts.

“In this scenario, the expected trade deal unwinds the impact of two years of trade wars on the global economy,” wrote Bruno Braizinha, a rates strategist at Bank of America Merrill Lynch. “Leading indicators bottom out near term as we enter a new mini-cycle, extending the current cycle by roughly three years. This allows for higher U.S. yields and steeper curves medium term.”

Two months ago, many of these yield curve measures were deeply inverted amid concerns that the bond-market was anticipating a near-term recession. A positive-sloping yield curve can therefore reflect stronger economic growth and inflation expectations, forces which can lift longer-term bond yields.

And so far, a recovery in investor sentiment has boosted longer-term yields, tentatively steepening the curve’s slope.

The 2-year/10-year TMUBMUSD10Y, -2.00%   spread, a popular yield curve measure, has increased to a positive 23 basis points, up from negative 3 basis points in Aug. 29. The 3-month/10-year gap, another gauge of the curve’s slope, has seen an even more dramatic widening of around 80 basis points since Sep. 3, with the spread last seen trading at a positive 30 basis points. 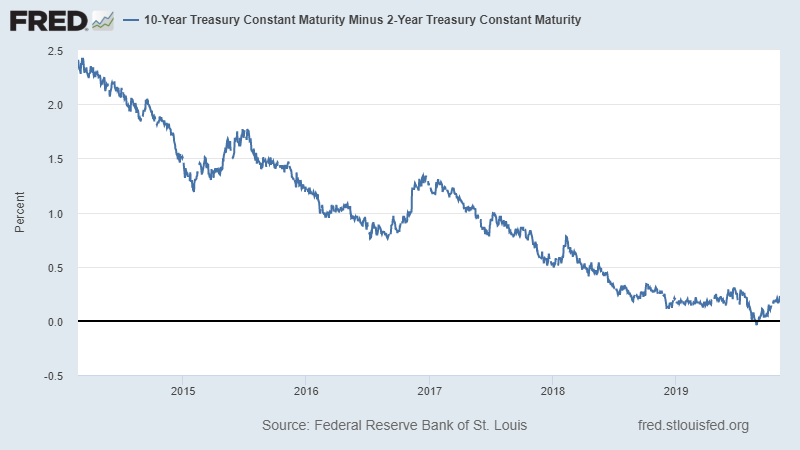 Since the Federal Reserve realized earlier this year that financial conditions were too tight and lowered its policy interest rate three times, short term yields have fallen and longer term yields have risen, steepening the curve.

See: The yield curve is no longer inverted. But some still see an impending recession

With Fed Chairman Jerome Powell insisting last week that the central bank wouldn’t lower interest rates further unless there is a sharp deterioration in the economic outlook, the potential for short-term yields to fall further appears slim. That has meant meager gains for traders who have taken a chance on yield curve steepeners this year.

“The bar for the Fed to ease is much higher,” said Gregory Faranello, head of U.S. rates for AmeriVet Securities.

On the other side, insatiable appetite for income-producing assets from U.S. and overseas investors, along with muted inflationary pressures, have put a ceiling on yields for longer-term maturities.

Analysts at Bank of America Merrill Lynch estimate that if the fed funds rate stays in its present range between 1.50% to 1.75%, the most the 2-year/10-year spread could steepen would be about 90 basis points.