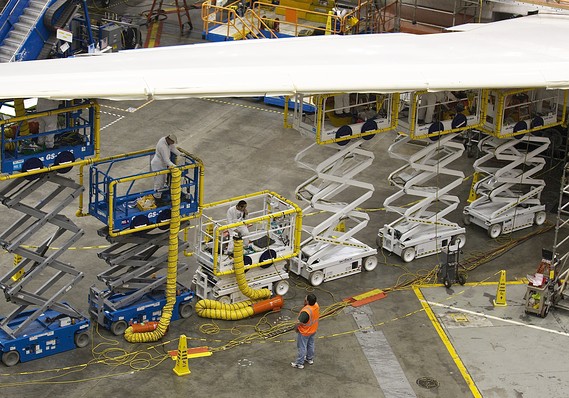 Workers were less productive in the third quarter.

The numbers: The productivity of American workers fell in the third quarter for the first time in almost four years, reflecting a cutback in production as the U.S. economy slowed toward the end of summer.

Productivity declined at a 0.3% annual rate from July to September, the government said Wednesday. It fell a somewhat smaller 0.1% among American manufacturers.

Economists surveyed by MarketWatch had predicted a 0.6% increase in productivity.

The drop in productivity might be just temporary if the economy speeds up again, but it could also be a warning sign. Businesses reduced production in response to softer demand, especially for exports. The trade war between the U.S. and China has disrupted global supply chains and contributed to a world-wide slowdown in economic growth.

What happened: Companies increased the amount of goods and services they produced, known as output, by a solid 2.1%.

Yet the hours workers spent on the job rose an even faster 2.4%, the Bureau of Labor Statistics said Wednesday. Productivity is determined by the difference between output and hours worked.

Unit-labor costs, meanwhile, rose at a 3.6% annual rate. Over the past year these costs have climbed 3.1%, the highest year-over-year clip in more than five years.

All figures are seasonally adjusted.

Big picture: Productivity had accelerated in the past several years as companies boosted investment, punctuated by large 2.8% and 3.6% gains in the first two quarters of 2019. Yet the trade war with China has thrown a wrench in corporate-spending plans. It could be a problem for the U.S. economy if the trade war persists.

Without more business investment, productivity might backslide. That’s not good for workers or businesses. Higher productivity is the key to a rising standard of living, resulting in higher pay, more profits and low inflation.

Low productivity is a sign of an inefficient economy. Productivity in the U.S. has risen at an average rate of just 1.3% since 2007, compared with a 2.1% average since the end of World War II.

Market reaction: The Dow Jones Industrial Average DJIA, +0.11% and S&P 500 SPX, -0.12% were set to open higher in Wednesday trades. Both indexes have set fresh records in the past week on optimism on a breakthrough in U.S.-China trade talks.

Read: The economy is avoiding the worst potholes, but the U.S. isn’t ready to hit the gas