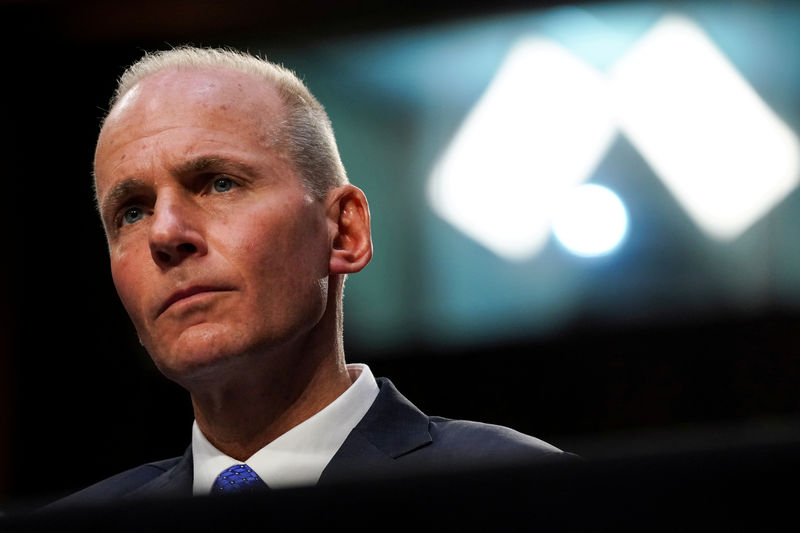 WASHINGTON (Reuters) – Boeing Co (N:) Chief Executive Dennis Muilenburg said on Wednesday he would forgo “tens of millions of dollars” in compensation after asking the company’s board of directors to waive his bonuses on Saturday.

Chairman Dave Calhoun said on Tuesday Muilenburg had asked not to receive any bonuses for 2019 or equity grants and not to receive any new equity grants until the 737 MAX airplane had returned to full service, which might not happen until early 2021. Muilenburg also said he planned to make significant donations to a fund to help the families of 346 people killed in two fatal 737 MAX crashes.

“It’s not about my money,” Muilenburg said at The New York Times DealBook Conference.

Muilenburg received $23.4 million in total compensation for 2018 and came under criticism from lawmakers for not immediately taking a cut in his compensation following the Lion Air crash in October 2018.

He said he was forgoing the bonuses to “send a message of responsibility.”

A Boeing spokesman said on Wednesday Muilenburg “has committed to donating the entire value of any previous equity grants that vest in 2020.”

Calhoun gave Muilenburg a strong vote of confidence on Tuesday, saying the board believed Muilenburg “has done everything right.”

Muilenburg said he would like to still be Boeing’s CEO in three years.

Muilenburg also said the company would support reforms of a long-standing practice of the Federal Aviation Administration, of delegating certification tasks for new airplanes to Boeing and other manufacturers. Several reports faulted this delegation process in the 737 MAX review.

In the case of the 737 MAX, 40% of the certification tasks for the jet were delegated to Boeing.