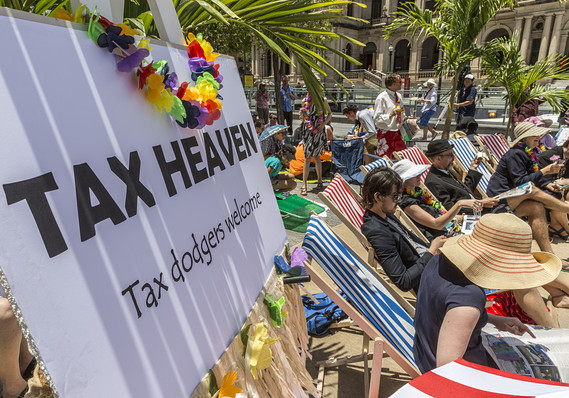 Protesters lampooned tax havens in Brisbane, Australia, ahead of the 2014 G-20 summit.

Multinational corporations have long avoided paying their full share of taxes. It’s a situation that infuriates many Americans — the idea that a large corporation can avoid paying its full tax obligation simply by parking profits in an offshore tax haven. The cost is significant, though, and it’s estimated that such profit shifting now costs the U.S. Treasury roughly $80 billion annually.

The United States isn’t the only country struggling with corporate tax avoidance, however. It’s a global problem, and serious enough that France, for example, has started imposing digital taxes on tech companies such as Apple AAPL, +0.02%  , Google GOOG, +0.32%  , and Facebook FB, -0.27%  .

This mostly affects U.S. corporations, which is why President Donald Trump has responded with threats of retaliation against French wines. Other countries, including Italy, Austria, Canada, and Mexico, are considering similar digital taxes.

Joseph Stiglitz: The race to the bottom on corporate taxation starves us of the resources we need

The Organisation for Economic Co-operation and Development (OECD) has accelerated its timetable for reviewing the problem. Some consider this a hopeful development——the OECD intervening, and helping industrialized countries to finally solve the larger problem of corporate tax avoidance.

Unfortunately, what the OECD is proposing will essentially keep the current system in place. And that means multinational enterprises (MNEs) still being able to stash much of their profit in tax-haven countries.

How do MNEs manage to get away with all of this flagrant profit shifting? For decades, they’ve used a principle known as “arm’s length” to justify allocating profits to tax havens in countries like Bermuda. The result is that, even though MNEs sell vast amounts of products in the U.S. market, they transfer much of the resulting profit to subsidiaries in low-tax countries.

The OECD is feeling intense pressure to correct the situation. But with MNEs opposing any attempt to abandon arm’s length, the OECD appears to have buckled. It is suggesting only a minor change in the status quo—limiting the application of any new taxes only to the unusually high profits of the world’s largest corporations.

The old system will still apply to all other corporate profits. As a result, most MNEs will still be able to channel profits to tax havens.

Clearly, a better system is needed—for the United States, for France, for various developed countries struggling to close budgetary shortfalls. Ironically, the OECD may have actually considered a more practical solution—when it looked at the sales-based taxation system currently being used by a majority of U.S. states.

What most of the 50 states use is a “destination-based” corporate tax known as sales factor apportionment (SFA). Under SFA, a company is required to pay taxes on the profits of its sales in that state, regardless of where it might be physically located.

Extending an SFA system to the national level would mean the U.S. government taxing all corporate profits in the same manner. Whatever profits a company earned on sales in the U.S. market would face a corporate tax — no matter the subsidiary entities involved, or the possible tax havens.

With European countries obviously unhappy that Google and others are stashing profits in low-tax nations, an SFA system would make particular sense. Like the United States, they possess affluent consumer markets. And that provides leverage to justify fully taxing MNEs. Doing so could help to reverse longstanding incentives for outsourcing—since tax havens would no longer serve a practical purpose.

Overall, SFA would mean both domestic companies and MNEs finally bearing the same tax obligation. That should be the goal of any equitable tax policy. And it should be the response to decades of lost tax revenues, thanks to the exploitation of arm’s length.

It’s commendable that the OECD is finally trying to tackle the problem of corporate tax avoidance. But as one international committee recently observed, the current system is feeding “historical levels of inequality, impeding the fulfillment of human rights, tearing away at the global social fabric and endangering future economic growth prospects.”

These are serious concerns, and the United States should begin to address them—and level the global playing field—by adopting an SFA tax system.

Doing so would help domestic companies finally compete fairly against multinational corporations. And that’s a priority both Washington and Europe can share.