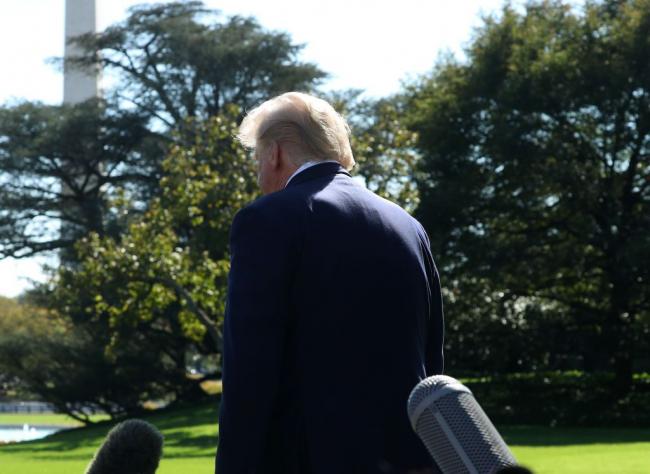 Secretary of State Michael Pompeo indicated discomfort with Rudy Giuliani’s involvement in U.S. policy toward Ukraine but realized there was little he could do about it, according to transcripts of witness testimony to the House impeachment inquiry released on Tuesday.

One witness, U.S. Ambassador to the European Union Gordon Sondland, said Pompeo “rolled his eyes and said, ‘Yes, it’s something we have to deal with,’” when discussing Giuliani’s role. The other witness, former Ukraine envoy Kurt Volker, testified that Pompeo told him he was glad Volker was trying to correct the “damaging or negative image” Giuliani was giving Trump regarding Ukraine.

Both witnesses described a secretary of state who realized there was little he could do to dissuade Trump from listening to Giuliani, though neither said he had first-hand knowledge of Pompeo ever confronting Trump directly. “My speculation is yes, that they hit a brick wall when it came to getting rid of Mr. Giuliani,” Sondland said.

The testimony offers the first detailed description of Pompeo’s impatience with Giuliani. Pompeo has so far refused to offer a public opinion on the former New York mayor’s role, evading questions in numerous television and radio interviews or saying private citizens are often enlisted to help carry out foreign policy.

FBI Director Christopher Wray told senators on Tuesday he hasn’t had any communication with Trump’s personal lawyer Rudy Giuliani and declined to say whether Giuliani has made formal representations to his investigators on any matters.

Wray also said neither Trump nor anyone at the White House has asked him to open investigations into any particular individuals.

“I think there should be no opening of an investigation based on anything other than the facts and the law,” Wray told the Senate Homeland Security and Governmental Affairs Committee. “My loyalty is to the Constitution and to the people of this country.”

Wray was responding to questions from Senator Kamala Harris, a Democratic presidential candidate.

Wray also said the FBI wants to know about any efforts by individuals or foreign governments to interfere in U.S. elections. — Chris Strohm

White House spokeswoman Stephanie Grisham repeated her assertion that Trump had done nothing wrong and said the testimony from Sondland and Volker shows “there is even less evidence for this illegitimate impeachment sham than previously thought.”

She cited testimony from Sondland saying he didn’t know why aid to Ukraine was suspended. And she said Volker’s testimony confirms there wasn’t a quid pro quo because the Ukrainians didn’t know funds were suspended at the time.

“No amount of salacious media-biased headlines, which are clearly designed to influence the narrative, change the fact that the president has done nothing wrong,” Grisham said in a statement. — Jordan Fabian

Senate Majority Leader Mitch McConnell said Trump would be acquitted if he faced a Senate impeachment trial now about allegations he pressured Ukraine to investigate Joe Biden and his son.

“I’m pretty sure how it’s likely to end,” McConnell told reporters after a closed-door meeting with all Senate Republicans. “If it were today, I don’t think there’s any question it would not lead to a removal.”

McConnell said he can’t predict how long a trial might take, but said Democrats may have an incentive not to let it last through the party’s presidential primaries scheduled for early next year. Six Senate Democrats are seeking the nomination.

“How long does a presidential candidate want to be here on the floor of the Senate instead of in Iowa and New Hampshire?” McConnell said.

He also said it’s clear that the Democratic-led House will impeach the president, adding that Democrats are “hell-bent to do this.” — Laura Litvan

Volker, who was Trump’s special envoy to Ukraine, told House impeachment investigators that when he advised the president to meet with Ukraine’s new leader, Volodymyr Zelenskiy, Trump complained that the Ukrainians “tried to take me down.”

The remark appears to be a reference to an unsubstantiated belief among some Trump allies that Ukraine attempted to interfere in the 2016 election on behalf of Trump’s opponent, Democrat Hillary Clinton.

Trump referred to the theory in a July 25 phone call with Zelenskiy. After Zelenskiy asked about purchasing additional U.S. anti-tank missiles to combat Russian-backed separatists, Trump responded by saying: “I would like you do us a favor though, because our country has been through a lot and Ukraine knows a lot about it,” according to a White House memorandum documenting the call.

Trump then mentioned elements of the theory, including a U.S. cybersecurity firm called CrowdStrike and a Democratic National Committee server that some Trump allies believe was hacked or even physically stolen by Ukrainians. “The server, they say Ukraine has it,” Trump told Zelenskiy.

Zelenskiy responded by telling Trump that “we are ready to open a new page on cooperation in relations” with the U.S., but the Ukrainian leader had no idea what Trump was talking about, according to people familiar with his reaction to the call. — Steven T. Dennis

Sondland filed a supplemental statement on Monday revising his original testimony, saying that “by the beginning of September 2019, and in the absence of any credible explanation for the suspension of aid, I presumed that the aid suspension had become linked to the proposed anti-corruption statement” by Ukraine.

In Sondland’s initial testimony, he said he didn’t recall when he became aware that the corruption that Trump lawyer Rudy Giuliani was pushing to investigate was actually related to Joe Biden and his son.

Sondland said he reviewed the testimony of two other U.S. officials — William Taylor and Timothy Morrison — and their opening statements “refreshed my recollection about certain conversations in early September 2019.” Sondland said he did recall a Sept. 1 conversation in which Ukraine’s president asked Vice President Mike Pence about the U.S. aid for Ukraine that was being withheld.

The statement also said that Sondland now recalls a conversation in which he told Ukrainian official Andriy Yermak that a “resumption of U.S. aid would likely not occur until Ukraine provided the public anti-corruption statement that we had been discussing for many weeks.” — Steven T. Dennis

Volker warned Trump’s personal lawyer Rudy Giuliani that allegations raised by former Ukraine prosecutor Yuriy Lutsenko were not credible, and he defended Joe Biden’s push to have Ukraine fire him when Biden served as vice president.

“He was executing U.S. policy at the time and what was widely understood internationally to be the right policy,” Volker told the committees.

He said that when Trump officials recommended to the president on May 23 that he schedule an Oval Office meeting with Ukraine’s new president, Trump said Ukrainians “tried to take me down” and said they should talk to Giuliani.

Volker testified that he was never told why Trump withheld security aid from Ukraine, saying it struck him as “unusual” because the Pentagon, the State Department and the National Security Council all thought the aid was “really important.”

Volker said he first learned of the aid freeze on July 18, a week before Trump’s call with Ukraine’s president — and he assumed the aid would eventually be released given the support for it inside the administration. — Billy House and Steven T. Dennis

Sondland testified that a promise by Ukraine to investigate Joe Biden’s son and the 2016 election was a condition that “would have to be complied with” for the country’s leaders to get a meeting with Trump.

“That was my understanding,” Sondland said in excerpts of his interview transcript released by House Democrats on Tuesday.

Sondland says the requests for the Ukrainian government, led by Trump’s personal lawyer Rudy Giuliani, were initially just related to corruption, but “kept getting more insidious” as time went on. He said he wasn’t aware of the connection between the Bidens and the Ukrainian gas company Burisma until later, at least after July.

Sondland said Secretary of State Michael Pompeo described Giuliani’s involvement in foreign affairs as “something we have to deal with.”

“People usually smiled when they heard Rudy’s name because he was always swirling around somewhere,” Sondland said.

Sondland and Volker had pivotal roles in the Trump administration’s interactions with Ukraine that are at the heart of the impeachment probe. They and Energy Secretary Rick Perry were the “three amigos” deputized by the White House to help Trump’s personal lawyer Rudy Giuliani lead back-channel administration overtures to Ukraine.

The releases are part of House Democrats’ effort to open the impeachment process ahead of public hearings expected later this month. Republicans have criticized the private depositions that were attended by members of both parties who sit on the House Intelligence, Foreign Affairs and Oversight committees. — Billy House

Acting White House Chief of Staff Mick Mulvaney was asked to appear for questioning this Friday by the three House committees leading the inquiry.

The committee leaders said in a statement that their probe shows he may have been “directly involved” in an effort led by Trump, his personal lawyer Rudy Giuliani and others to “withhold a coveted White House meeting and nearly $400 million in security assistance in order to pressure Ukrainian President Volodymyr Zelenskiy to pursue investigations that would benefit President Trump’s personal political interests, and jeopardized our national security in attempting to do so.”

The committee leaders cited Mulvaney’s Oct. 17 press conference in which he acknowledged a political motivation for withholding aid to Ukraine, rather than the national interests of the U.S.

The invitation to appear follows an Oct. 4 subpoena for White House documents. The White House didn’t respond to the demand. — Billy House

Griffith has not arrived for his closed-door testimony and is not expected to, according to an official familiar with the actions of the three House committees leading the inquiry.

Duffey’s testimony is scheduled for Tuesday afternoon, but White House officials have said that he won’t appear. — Billy House