Value stocks have underperformed growth stocks by a wide margin during the extended bull market.

When this briefly reversed during September, Morningstar did a three-part study of data going back to the 1990s — another period when growth was riding high and value lagged. Its analysts then narrowed their focus to the best-performing value strategies of the past three years and came to a fascinating conclusion.

For large-cap stocks, Morningstar found that tracking the Dow Jones Industrial Average DJIA, +0.11%  not only delivered better returns than other value strategies over the last three years but it also performed well versus growth strategies for other, longer periods.

You may already know that value indexes and the funds that track them have lagged growth indexes and funds since the stock market hit bottom in March 2009, in the wake of the global financial crisis. One big reason is that the value group excludes many of the large technology companies that have increased their sales and earnings exponentially, leading to much better investment returns even though they have traded at much higher ratios to earnings, book value and sales.

Amazon.com AMZN, -0.15% is an excellent example — the internet retail pioneer’s shares trade for 66.5 times the consensus earnings-per-share estimate for the next 12 months, based on analysts polled by FactSet. That compares to a forward price-to-earnings ratio of 17.4 for the S&P 500 SPX, -0.10%. Over the past 10 years, Amazon’s shares have often traded at much higher forward P/E than they do now. But the stock was up 1,407% for the decade through Nov. 1.

S&P Dow Jones Indices divides the benchmark S&P 500 into value and growth indexes, based on price valuations to earnings, book value and sales. Here’s how ETFs that track those two indexes, the full S&P 500 and the Dow have performed over the past 10 years: 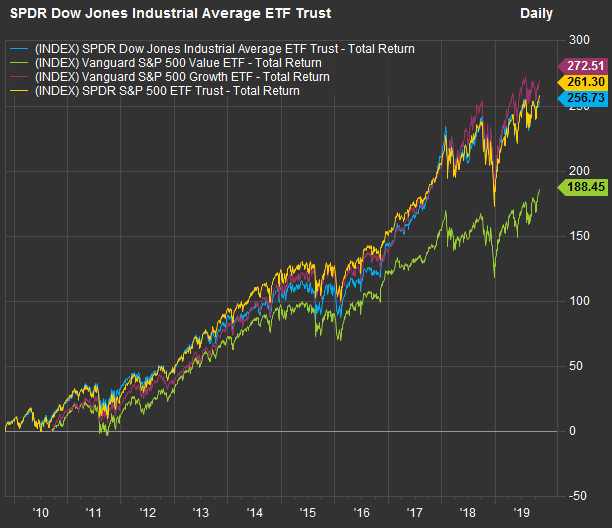 It’s no surprise that the Vanguard S&P 500 Growth ETF VOOG, -0.39%  has been the best performer among the four during this strong decade for growth strategies, with the Vanguard S&P 500 Value ETF VOOV, +0.17% lagging far behind. But the SPDR Dow Jones Industrial Average ETF DIA, +0.09%  was only slightly behind the SPDR S&P 500 ETF Trust SPY, -0.11%. What’s remarkable about that is that the Dow represents a value portfolio — a much more conservative group of companies than the heavily tech-weighted S&P 500.

And now to value

Tom Lauricella and Katherine Lynch of Morningstar pointed out that before the dot-com bubble began to burst in 2000, growth stocks had also outperformed value for years. While that and signs of slowing economic growth might make you think it’s a good time to switch to value, the writers cautioned that the current situation is different because “many of the technology stocks that have led the long-running bull market are real companies with real earnings.”

That said, what value strategies have been best in recent years? According to Lauricella and Lynch, there has been one main theme: “Value funds that focused on higher-quality companies” tended to perform best, especially those that “focused on dividend-paying companies.” They listed the 10 best-performing value-focused mutual funds and exchange traded funds over the past three years, and the winner was the SPDR Dow Jones Industrial Average ETF DIA, +0.09%.

Let’s return to our group of four ETFs shown in the 10-year chart above, now for three years through Nov 1: 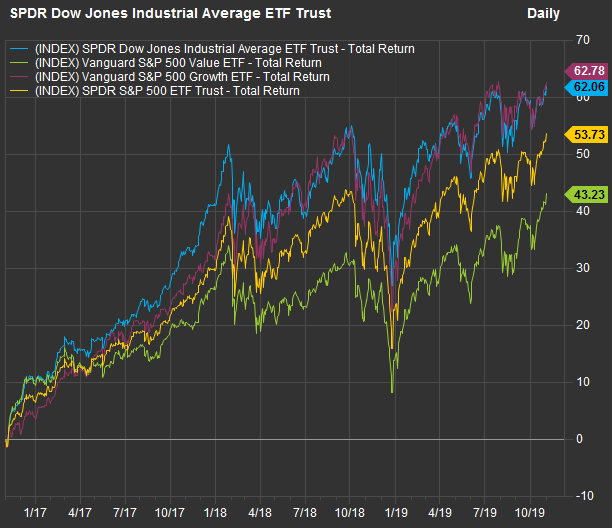 Once again, the Vanguard S&P 500 Growth ETF leads, but by less than 1 percentage point over the SPDR Dow Jones Industrial Average ETF.

When considering that it is an index made up of 30 of the best-known U.S. companies, including a lot of slow-growers, many of which feature attractive dividend yields, the Dow’s performance has been incredible. And if you now are looking to move more of your money into a more conservative value-oriented, dividend-focused strategy, this is the simplest and the best-performing value index fund among those tracked by Morningstar. And its annual expense ratio is only 0.17%.

Here are the 30 components of the Dow Jones Industrial Average sorted by three-year total returns (with dividends reinvested) through Nov. 1:

To read the Morningstar report in full, see the first section for long-term data that explains periods of outperformance for growth strategies. The second section shares insights from value managers, and the third part lists the best-performing value funds over the past three years.